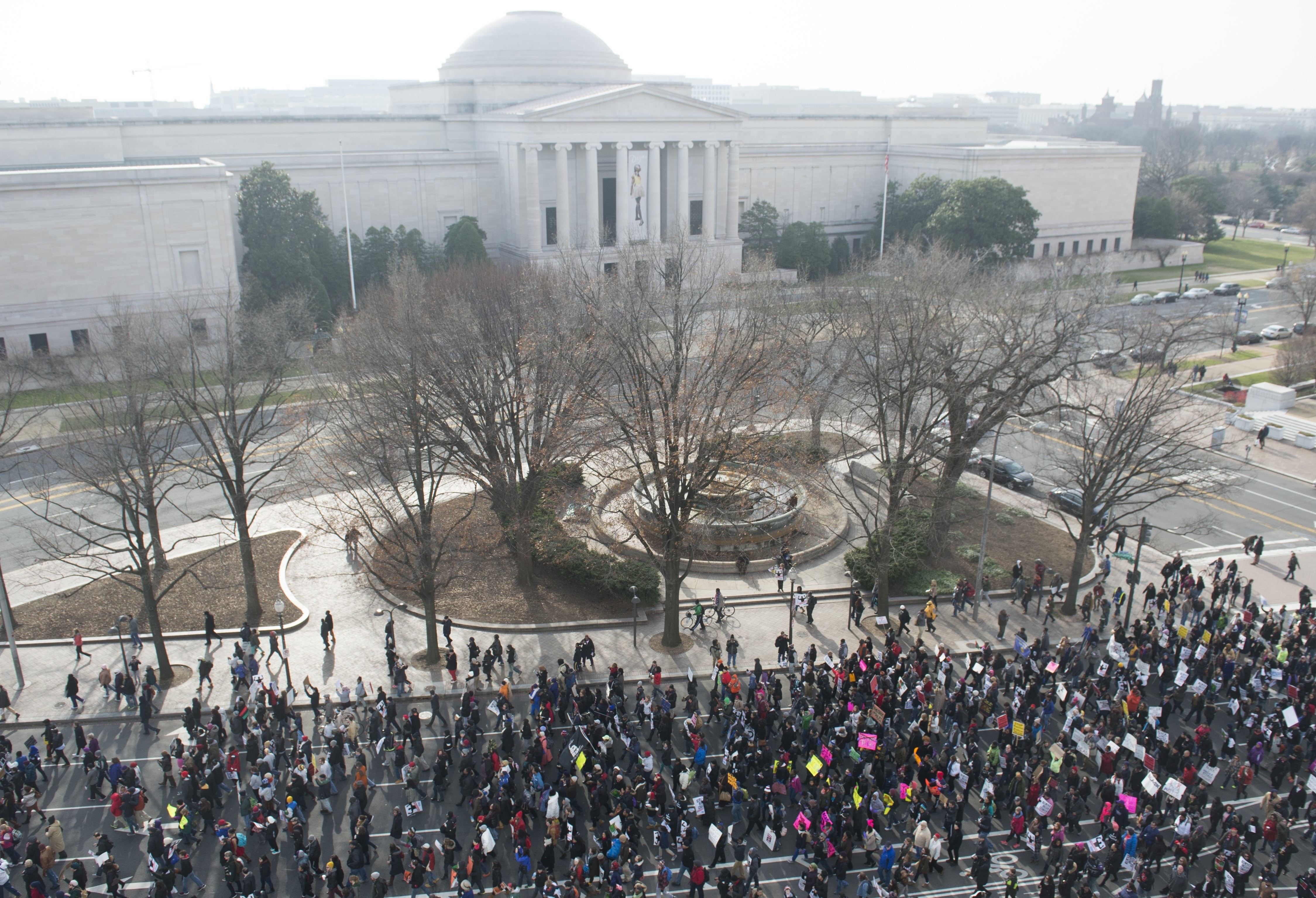 At 10:30 a.m. on Saturday, hundreds of people began to gather at the Freedom Plaza in Washington D.C. By noon, the crowd had swelled to thousands. The protesters began marching through the nation's capital to call for justice and decry racial discrimination in light of recent deaths of black men at the hands of the police.

The crowd rallied through the city demanding "justice for all," the slogan that lent the protest its name. The Justice For All march was a response to recent decisions by two separate grand juries in Ferguson, Missouri, and Staten Island, New York, which declined to indict the white police officers responsible for the deaths of, respectively, 18-year-old Michael Brown and 43-year-old Eric Garner.

The demonstration was organized by the National Action Network, a civil rights organization headed by the Rev. Al Sharpton. Sharpton joined the families as they marched through Washington Saturday.

"We are not anti-police; we are anti-police-brutality," Sharpton told protesters. "And today we challenge Congress to follow in the president's footsteps and take legislative action to protect us, the citizens."

"Do not be silent. Do not be complacent. Do not continue to live with police misconduct and violence as somehow acceptable," Sharpton urged earlier this week in a piece he wrote for The Huffington Post.

Trevon Ferguson, a 14-year-old from Long Beach, New York, said he had traveled about five hours to attend the march in D.C., and planned to head back with his family this afternoon. He said he has never had a problem with police officers, but constantly fears them.

“Sometimes I feel like, you never know, I might be the next Trayvon Martin or the next Eric Garner. So who’s to say that a cop wouldn’t come and just shoot me and leave me in the street?” Ferguson told HuffPost. “So I’m here to make sure that me and my family are treated equally, just as any white boy or girl. Dr. King believed in equality, so I’m here for equality.”

The mothers of Rice, Garner, Brown and Trayvon Martin, a black teenager who was shot in 2012 by a neighborhood watch volunteer, appeared together in public for the first time Friday night. In a joint interview on CNN, the women spoke out against racial discrimination and argued that their sons might not have died if they had been white.

"If Eric Garner was a white man in Suffolk County doing the same thing that he was doing -- even if he would have been caught selling cigarettes that day -- they would have given him a summons and he wouldn't have lost his life that day ... I believe that 100 percent," Garner's mother, Gwen Carr, told CNN's Anderson Cooper.

The deaths of these black men have become part of a narrative that many believe is all too common in the United States.

"We are together. We are united. We are standing. And we are going to fight this together," Sybrina Fulton, Martin's mother, told the crowd before she began to lead the march. "You guys mean the world to us."

Garner's mother also approached the podium and praised the diversity of the crowd.

"Look at the masses," she said. "Black, white, all races, all religions ... We need to stand like this at all times."

In recent weeks, protesters around the country have participated in demonstrations to decry racial injustice and police brutality.

Dion Anderson, a 42-year-old from Washington, D.C., said he “felt obligated” to come to the event because of his own negative experiences with police officers, especially growing up.

"When I was eight years old, we were at the basketball court playing basketball and a Prince George’s County police officer -- I’m tearing up right now thinking about it -- just came on the basketball court and flattened [the ball], and just left. For no reason. So that’s why I’m obligated to come down,” Anderson said. “I even got scars on the back of my head from Prince George’s County Police Department … So police brutality has been rampant in my life.”

Many of the signs and chants from protests around the country have used the slogan that has become synonymous with the movement: "Black lives matter."

That same message was echoed by protesters who participated in the Justice For All march on Saturday. Here are some powerful images:

The slideshow below will be updated with images throughout the day.