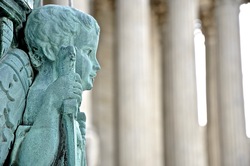 If you watched "Making a Murderer," the ten-episode Netflix documentary about the 2005 murder of Teresa Halbach in Manitowoc, Wisconsin, you were probably both transfixed and horrified by the scenes chronicling the police interrogation of 16-year-old Brendan Dassey. Dassey is the nephew of Steven Avery, whose arrest, prosecution and conviction for Halbach's murder were the central focus of the documentary. Dassey ultimately provided the confession the police demanded, repeating the suggestion that he assisted Avery in Halbach's murder. He was convicted and, under the current terms of his sentence, would not be eligible for parole until 2048.

Despite the apparent flaws in the interrogation and investigation, the Wisconsin appellate courts rejected his appeals and affirmed his conviction in 2013. With a new legal team, Dassey then sought habeas corpus relief in the federal district court in Wisconsin. On August 12, a federal magistrate judge granted his petition and ordered Dassey released from prison -- unless the state of Wisconsin, within 90 days of the court order, decides to retry Brendan for his role in that murder.

Brendan's potential release is welcome news, as our justice system continues to struggle with how to assess the legal "voluntariness" of children's confessions. Based on public sentiment and other contemporaneous commentary on "Making a Murderer," we know that much of the Netflix audience was shocked and appalled as they witnessed two Manitowoc County detectives - as well as the private detective hired by Brendan's own attorney -- repeatedly cajoling, manipulating and spoon-feeding Brendan the necessary words and facts to finally extract a confession to Ms. Halbach's murder. Importantly, without Brendan's "confession," there was no other evidence actually linking him to the crime. Viewers watching these scenes unfold, from the average lay person to legal scholars, believed the interrogation repeatedly crossed the line from dogged police investigation in pursuit of the truth to intimidation and manipulation in pursuit of a false confession, regardless of the cost.

Public skepticism that anyone would really falsely confess to such a heinous crime as murder is common - but "Making a Murderer" provides the blueprint for how it can happen. We all bore witness to the coercion and manipulation. Multiple studies also prove that many people will falsely confess simply to end an interrogation, especially children who lack the understanding of the gravity or permanence of their statements. The coercion present in any police interrogation are magnified for children, whose susceptibility to suggestion, deference to authority, and simple lack of understanding about what is at stake in a police interrogation and investigation all make children more vulnerable to falsely confessing to crimes they did not in fact commit.

While we would expect this research to alter the standards for evaluating children's confessions, the law continues to set a high bar for the suppression of these confessions, requiring evidence of extreme duress, coercion, or physically or psychologically abusive interrogation techniques before throwing out statements that otherwise, conveniently wrap up a case. Courts must look at the totality of the circumstances surrounding the challenged confession to determine if it was truly voluntary or involuntary; the age of the suspect is only one factor in that calculus.

In declaring Brendan's confession involuntary under this "totality of circumstances" test, the federal judge highlighted several aspects of the interrogation, including the investigators' promises, assurances, and threats of negative consequences in light of Brendan's age, his intellectual deficits, lack of experience with the police, the absence of a parent during the interrogation, and other relevant personal characteristics. Dassey was repeatedly led to believe he would not be punished for incriminating himself in Teresa's murder and promised either leniency if he told the "truth" or repercussions if he did not. The totality of the evidence convinced the judge "that the free will of a reasonable person in Brendan's position would have been overborne." This conclusion, the court wrote, was not one about which "fair minded jurists could disagree," and in fact precisely illustrated the "extreme malfunction in the state criminal justice system" that federal habeas corpus relief exists to correct.

While the depiction of Dassey's interrogation is chilling, there is a larger message that emerges from this case. Once again, we are compelled to recognize that children are NOT adults. We intuitively know children's limitations, and enact numerous legal barriers to teenage driving, participation on juries, purchasing alcohol or cigarettes, and many other prohibitions on certain activities "reserved" for adults. Yet when it comes to potentially life-altering involvement with our justice system, law enforcement and the courts too often refuse to account for these deficits, failing to apply some of the most fundamental tenets of due process in these high stakes interrogations.

A reset of how police interrogate children and extract incriminating statements from children is long overdue; safeguards must be put in place to ensure understanding of what's at stake and limit coercion. Brendan was alone in that interrogation room - without a parent, and more importantly, without proper legal counsel. The fact that he was Mirandized provides no cover of truth to his answers, as it was clear to anyone watching how little he understood the litany of rights he purportedly possessed - and waived. Brendan might finally receive some justice - albeit after years of unnecessary incarceration -- but every single day, children and teens in this country are subjected to these same coercive interrogations, without the benefit of counsel. As we see in Brendan's case, great lawyering that comes late in the process can correct errors, but it cannot reverse trauma or give back the years Brendan has lost.