This piece was co-authored by Reina Gossett, the membership director at the Sylvia Rivera Law Project as well as the 2014-2015 Activist-In-Residence at Barnard College's Center for Research on Women. 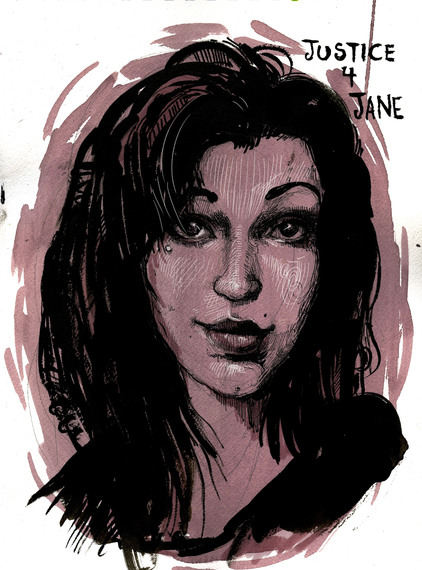 Jane asked her supporters to share this representation of her so you can see her as the person that those of us who know her best do: a teenager who wants to smile with friends, shop for prom dresses with Janet Mock, and have a family to love her.

She wants you to see her this way because today is the 65th day that she has been in prison at an adult facility despite never having been charged with a crime or convicted of one.

Since being incarcerated Jane has spent most of her time in solitary confinement. She has not interacted with a peer since January. She cannot shower without two guards watching her. She has asked for help and those with legal custody over her have locked her away in the hopes that she will be forgotten.We have also read Jane Doe's own words about her situation, which is incredibly dire. On May 8, after spending a month in prison with no charges, Jane asked Connecticut Governor Dannel O'Malloy for help:

"I have been sitting in this prison for a month now and there is no plan to get me out. I am suffering in here. I'm having trouble sleeping and I'm not eating much. I cry in bed every night. I can't be myself in this place. I feel forgotten and thrown away...DCF is supposed to be helping me, right? If this is helping me then I'm all set with being helped. I would be a lot better off being on my own. It seems like you're my last chance to get out of here. Don't forget about me. I can't take another month of this."

Over 18,681 people have now petitioned the Connecticut Department of Children and Families to demand Jane Doe be released, and this week Katie Couric had Laverne Cox, Tiq Milan and Chase Strangio on to discuss Jane's case.

Yet she still remains in prison. Jane needs to be released from prison so that she can heal and experience the love and support that she deserves. Jane is a teenager with dreams whose humanity we cannot forget and she needs our help to make that happen.

Join us demand her immediate release!

Join Jane and her legal team on June 16:
Demand justice for the Department of Children and Families' actions.

Write Jane a letter:
Jane needs letters of love and support for her struggle. Email justice4janect@gmail.com with the subject "Letter for Jane Doe" and the #JusticeForJane organizers will get your letter to her attorney, who can get it to her.

Call & Tweet DCF Commissioner Joette Katz and CT Governor Dannel Malloy:
Call DCF at 860-550-6300.
Call Governor Malloy at 860-566-4840.
Sample message: I'm calling to demand that Joette Katz and Governor Malloy take action to immediately release Jane Doe, the 16-year-old trans girl who's been kept at York Correctional for 65 days now without charges. It's an outrage that DCF and the State of Connecticut are responding to abuse by torturing the victim instead of giving Jane a safe environment.

.@CTDCF, @GovMalloyOffice: 65 days in prison is 65 days too many! #JusticeForJane means releasing her to a safe & caring environment now!
(You can edit the tweet before you send it. Make sure to use the #JusticeForJane hashtag!)

Justice for Jane Doe and the urgency of survival by Chase Strangio and Reina Gossett (via reinagossett.com)

Reina Gossett is the membership director at the Sylvia Rivera Law Project as well as the 2014-2015 Activist-In-Residence at Barnard College's Center for Research on Women. Prior to joining the Sylvia Rivera Law Project Reina worked at Queers for Economic Justice where she directed the Welfare Organizing Projected and produced A Fabulous Attitude, which documents low-income LGBT New Yorkers surviving inequality and thriving despite enormous obstacles.