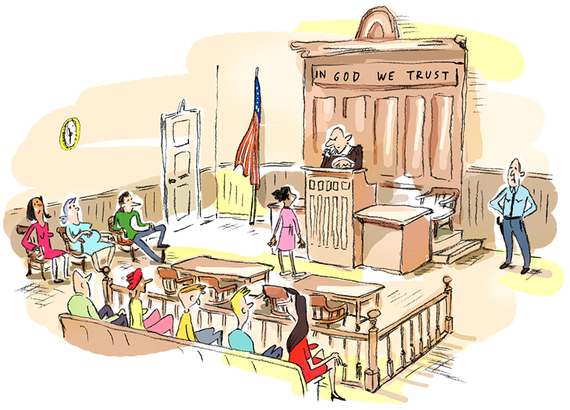 "You have the right to remain silent," says the judge, sitting at a high podium in front of a monumental wall. At one side of him stands a police officer with a shining revolver at his belt; on the other, a huge American flag. In front of the judge, about two yards lower, is a young black woman in an inexpensive pink dress.

The judge then repeats aloud the charge against her into his microphone, which fills the crowded courtroom. "So you drove 32 miles an hour on a road with a limit of 25. Then you were unable to produce a valid license."

She remains silent and looks down at her shabby sneakers.

"Do you plead guilty?" he asks.

The judge holds up her license. "Why didn't you have this with you?"

"I forgot my bag, because I had to rush to pick up my kid, in between work," she says.

"That'll be 250 dollars," the judge says abruptly. He bends forward. "Do you need an arrangement?"

"50 dollars," she whispers. The whole room is attentive.

I am sitting here this morning, together with some 80 other offenders because my son too could not find his license when he was stopped - in end it was just in his wallet. An old man who threw a cigarette butt out of the window: 250 dollars. A girl who hit a lamp post and obstructed traffic: 350 dollars. A heavily pregnant woman who had not yet registered her car: 250 dollars. A small man in overalls and a cap does not speak a word of English. A translator is called over the intercom. When he hears that his license will be taken, he panics. "Then I'll lose my job," he whimpers, first in Spanish, next in translation over the microphone. "And I have three children."

A woman in a white coat goes over three times to the prosecutor to explain that she is a doctor's assistant and really cannot stay away from work that long. "I am still a temp," she says, "but I ant them to hire me."

Three hours later my son is asked how he pleads. To my astonishment, I hear him say something that I have heard only on crime dramas on TV: "Guilty, Your Honor." I have to control myself not get up and shout, "Objection!"

On this particular morning the municipal court brings in a lot of cash while protecting public safety. Traffic fines collected are a great source of revenue for the city. The rich are unaffected by the trivial fines. At most they find it inconvenient to waste their time in court. Most of them are represented by lawyers, while they handle their affairs on their cell phones. But for the poor such an unscheduled absence from work is often a big problem. Moreover, they often cannot pay the fine and thereby risk being sent to jail.

Later, at the desk where the fines are collected, I am standing behind the black women, who nervously fingers a little crucifix on a chain around her neck. When it is her turn she counts counts the 50 dollars, mostly in singles. "The rest I'll have to borrow," she says to the clerk. "I'm not sure I will succeed."

Class justice: the rich pay their fines; the poor go to jail. As a penalty for their poverty.