Due to resurfacing rape allegations against Bill Cosby sparked by a joke fellow comedian Hannibal Burress made, the Twitter universe has been erupting with commentary in support of the alleged victims speaking out, as well as others questioning the validity of the accusations.

Cosby chooses not to respond publicly to the claims which have come from over fifteen different women. After the conclusion of an interview with the Associated Press, Cosby attempted to intimidate a reporter into quashing the portion of the interview that mentioned the sexual assault allegations. AP reportedly never agreed to Cosby's request and released the video below.

The person in control of their Twitter account posted tweets saying Bill Cosby "gets a pass" in reference to rape accusations. After receiving an influx of responses from Twitter users who were appalled and sickened by the comments, the group posted a tweet saying, "Most of these people replying need to be raped by Cosby." 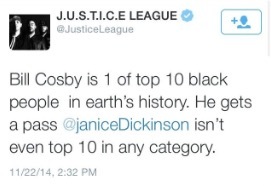 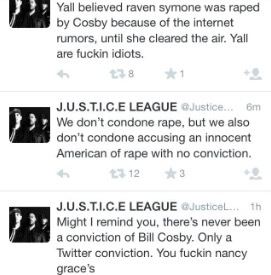 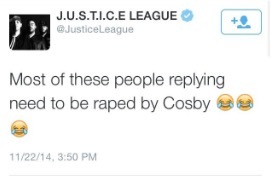 Needless to say, Twitter users did not reply favorably to the Justice League's flippant and revolting comments on rape.

So because Janice isn't relevant to you earwax-munching ass idiots, her alleged assault is excusable? Delete your page. @JusticeLeague

By that logic I guess George Zimmerman has never shot and killed an unarmed black teenager.

Why are you caping so hard for Cosby when he doesn't respect you, the music you make or your community? You sound stupid. @JusticeLeague

Someone even went so far as to edit the Justice League's Wikipedia page to reflect their Bill Cosby rape allegation tweets. The page edit has since been removed by Wikipedia. 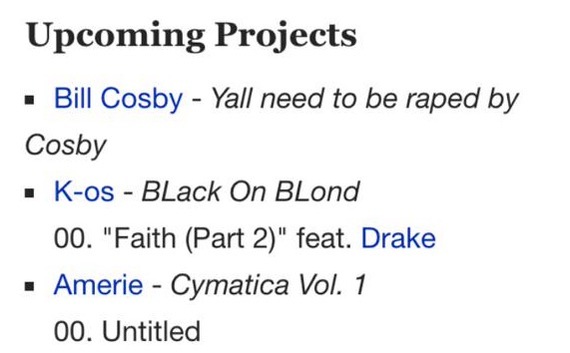 Within two hours, the obscene tweets endorsing rape culture were deleted from Justice League's account and replaced with this apology tweet. 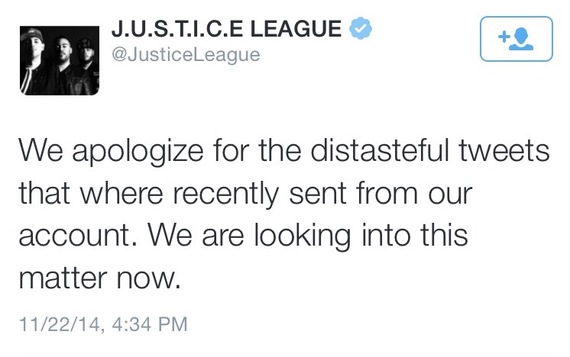 Everyone is certainly entitled to his or her opinion on Bill Cosby's innocence or lack thereof. Yet, I can only of think of one question: Why bother defending this man when he hardly defends himself?

On Friday in an interview with Florida Today Bill Cosby finally broke his silence saying, "I know people are tired of me not saying anything, but a guy doesn't have to answer to innuendos. People should fact-check. People shouldn't have to go through that and shouldn't answer to innuendos." Cosby's statement serves as commentary on why he refuses to address the claims rather than any denial of their validity. His lawyer has issued statements characterizing the women's claims as "fantastical" stating they lack evidence to substantiate their stories.

Bill Cosby is stubbornly silent in the face of more than a dozen women who have detailed accounts claiming he sexual assaulted them. Since the first accusations in the 1970s, Cosby does not openly deny them and in most cases refuses to address them. Instead he has settled civil suits from his accusers for undisclosed amounts of money and wielded his superstar power to stifle media reports of the rape allegations. Wendy Williams reported Cosby tried to have her fired after addressing the story on her radio show over twenty years ago.

Beyond that, it is especially peculiar that hip-hop music producers would come to the defense of a man who has undoubtedly expressed his contempt for hip hop culture. Many recall Cosby's black respectability politics-infused statements at the 50th Anniversary Commemoration of Brown v. Board in 2004. Cosby scolded the unique names of black children while demanding black men pull up their pants, saggy pants being a known practice in hip-hop culture.

In July 2004, Cosby even ventured to comment on the treatment of women in poor communities. "You've got to stop beating up your women because you can't find a job, because you didn't want to get an education and now you're (earning) minimum wage," he said. "You should have thought more of yourself when you were in high school, when you had an opportunity."

And yet here we sit as nearly each day a new woman comes forward confessing the utter mistreatment and manipulation she allegedly she endured from him. At least a dozen women have claimed to be drugged by Cosby before he unleashed sexual violence onto their bodies by forcefully having sex with them.

In Cosby's 2004 comments, he demanded members of the black community conform to his expectations of proper men and women. He demeaned poor blacks for their "misuse" of the English language and young women for not remaining chaste. When in fact, if even just one of these over fifteen sexual assault accusations rings true then it is he who has been deviant of respectable and decent human behavior for years despite his knit dad sweaters or life lessons on the Cosby Show.