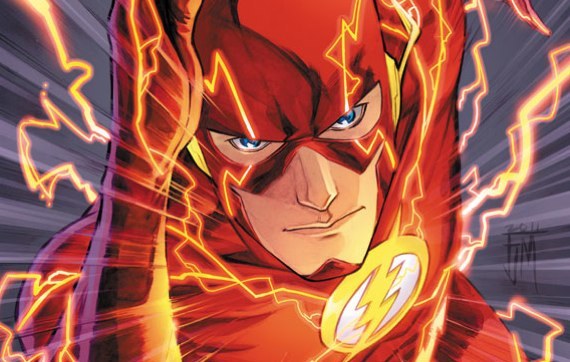 With the release of Man of Steel next week, it's hard not to think of the much-rumored and much-maligned Justice League of America movie.

If you don't know what Justice League is, it's basically The Avengers only with DC Comics characters like Superman, Batman and Wonder Woman. It's crazy, by the way, that we live in a world where The Avengers are more popular than Justice League. Until recently that was never the case (think of all of the iterations of Super Friends there have been, which is a watered down version of Justice League). With Man of Steel, however, the framework is certainly being set for an entire world of DC Comics movies. But if we're looking at Marvel's blueprint, something seems missing. And what's missing has everything to do with The Flash.

When Marvel decided to build their own little empire that would eventually lead to last summer's The Avengers, they started with Iron Man, of all people. Iron Man, now, is one of the most popular superheroes in existence. Before the release of 2008's Iron Man, he was a second tier character that the average human being did not have a vast awareness of. Now, to be fair, Marvel didn't have much of a choice: Sony owned the rights to its flagship character, Spider-Man. Which, when you think about it, makes the lack of a Justice League movie even more crazy: Warner Bros. hasn't licensed out all of DC's best characters, yet they are still having a hard time getting a Justice League movie off of the ground.

Anyway, back to Iron Man. As you are aware, the part of Iron Man/Tony Stark went to Robert Downey Jr., a perfect match of actor and role. Today, Iron Man is arguably the most popular theatrical superhero around.

Growing up, I read a lot of Iron Man comic books. What Marvel did well here was talking a relatively lesser-known character, keep his story close enough to the source material to keep its built-in fans (me) happy, and then craft what would become our point-of-view character throughout the Avengers' buildup. (Of the five pre-Avengers movies, Stark appeared in three of them and Stark's father appeared in another.) In other words: Tony Stark could be whatever Marvel wanted Tony Stark to be. To work properly, we need a point of view character in the DC universe as well, and the only character that really works is The Flash.

Let's take a look at DC's "big five," if you will. The two biggest names here are obviously Superman and Batman. Their stories are so well known that there's not much tinkering that can be done without fan outrage. Also, since Superman is an almost indestructible alien, it's hard to relate to him from an audience perspective.

Batman has a couple of problems, too: First, the character himself, though mortal, is a dark guy and kind of likes to keep to himself -- which is not the type of host we need throughout these movies. Second, the question of whether Christian Bale should return to play Batman or Warner Bros. should cast a new actor is just too complicated and won't be sorted out anytime soon. If it's a new Batman, well, we'll have to wait and see if audiences accept whoever that may be.

Wonder Woman isn't an alien, but she's an Amazon princess with super powers, so, she might as well be an alien (on a relatable scale, she's similar to Superman in a "larger than life" sort of way). And, like Superman and Batman, her backstory is fairly well known ... well, at least compared to, say, someone like Green Lantern. Oh, yeah, that guy ...

If you had asked me five years ago, I would have told you that Ryan Reynolds would have made an excellent Flash. I just never saw him as Green Lantern, but, whatever, what's done is done. Anyway, it's besides the point, because making a Green Lantern movie at that point was just a huge tactical mistake. It would have been like Marvel starting with a Guardians of the Galaxy movie instead of easing us into a story about interstellar superhero team. Green Lantern was just too much: "Here is this superhero with a magic ring that you probably don't know very well and there are 7,200 others out in space just like him, let's introduce you to all of them."

Like Iron Man, I read a lot of The Flash comic books in my childhood. (And, yes, I cried when the Barry Allen version of The Flash died during Crises on Infinite Earths.) Here's the thing: I care a lot about The Flash, but, as long as he runs fast and has a cool costume and is interesting, I could not care less what DC does with his character theatrically. ("Interesting" is a key word here, which is the biggest fault of the ill-fated 1990 television series.)

If you don't know The Flash, well, that's basically the point here. There are a few characters who have used that title, but the main guy, Barry Allen, is a normal human being who, after being struck by lightning-charged chemicals, can now run very fast. Actually, pretty much the same thing happened to Wally West, who went by Kid Flash for a while, then became The Flash after Barry Allen died. (There's also a character called Reverse Flash, but I'm starting to make this more complicated than it needs to be.) Whatever: the gist is The Flash runs fast. The other gist is that Barry Allen's Flash is a scientist -- which already has me thinking about how fun the scenes are of Tony Stark in his laboratory. Though nothing alike, both characters thrive in their simplicity: Iron Man has an armored suit; The Flash runs fast. Less is more.

Look, they can use the Barry Allen version or the Wally West version -- I really don't care. The Flash is a basically a blank slate that DC could use to guide us through their superhero movies. The Flash could be DC's Iron Man. And, yes, in a perfect world (along with world peace and the cure for cancer), Warner Bros. would have made The Flash instead of Green Lantern. (Which could have happened. And there is still a Flash screenplay floating around at Warner Bros. written by David Goyer, the same man who wrote Man of Steel.)

As for casting, remember, Robert Downey Jr. was considered an "outside-the-box" choice back in 2008 -- and he doesn't exactly have the physique we think of when the word "superhero" is tossed around. Well, how about we try something equally as weird: Jesse Eisenberg. Look, the guy is charming, he's fun to watch on screen, he already talks fast (a plus), he can crack wise (another plus) -- and he just proved that he can carry an ensemble team-up movie in this past weekend's Now You See Me. But Jesse Eisenberg doesn't look like a superhero? Stop it. Neither does Downey. In this case, charm and wit are more important than physique. He's the one who will sarcastically snap at the more earnest and/or stoic members of the JLA.

Yes, I really want a Flash movie, which is obvious. And, no, this doesn't seem to be Warner Bros. plan at this point -- though he does seem to be a part of every Justice League movie rumor. (And, maybe the point I'm trying to make about this character can be accomplished in a self-contained Justice League movie, I just have my doubts.) But, beyond my own selfishness, this does seem to be an opportunity wasted: To adapt a character that will be better known for the movie version than the comic book version -- to craft our "host" for this series, if you will, from a recognizable, but not widely known character: This was a huge key to Marvel's success. There's no shame in Warner Bros. trying to emulate that.