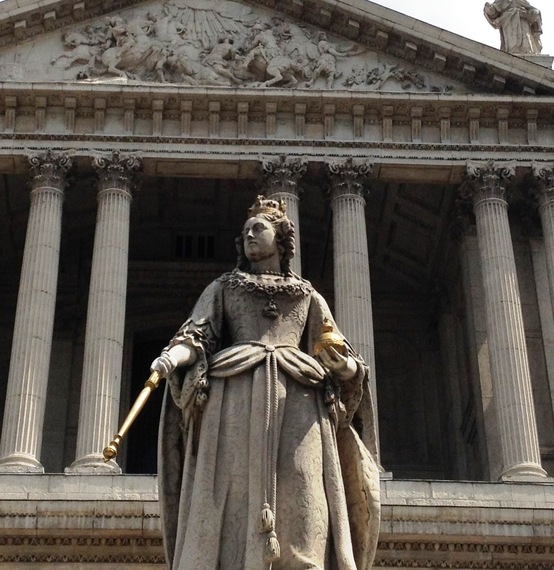 Justice Scalia in a fairly-recent co-authored book (Reading Law: The Interpretation of Legal Texts) tells us that "in their full context, words mean what they conveyed to reasonable people at the time they were written -- with the understanding that general terms may embrace later technological innovations." Justice Scalia considers something like this approach "the normal, natural approach to understanding anything that has been said or written in the past." (I say "something like this" because in that most recent book Justice Scalia gives multiple and not entirely consistent definitions of original meaning -- more about that below.)

As proof of such originalism, Justice Scalia notes a remark that Queen Anne may once have made to Sir Christopher Wren. She may have told him that St. Paul's Cathedral was "awful, artful and amusing" which under common usage meant "awe-inspiring, highly artistic, and thought-provoking." Because the meanings of these terms have shifted, and because we therefore need to take them in their original senses to preserve their original meaning, Justice Scalia believes that this possible statement alone "... is reason enough for using originalism to interpret private documents," and is the only approach "compatible with democracy" for public documents lest we effectively rewrite them.

Of course, Justice Scalia is correct that failure to understand any such contemporaneous meanings of these terms would lead a modern reader to misinterpret what Queen Anne may have said. However, on its face, this example does not apply to the interpretation and application of an ongoing legal rule. Instead, it involves understanding the words used to make a statement about a past state of affairs. No honest person would want to claim that Queen Anne made a statement that she did not mean to make at the time.

However, nothing here suggests that statutory or constitutional meanings and their applications are frozen in time. If instead Queen Anne had signed a statute permitting only "awful, artful, and amusing buildings," which we now diligently read to mean "awe-inspiring, highly artistic and thought-provoking," that hardly means that the inspiring, the highly artistic and the thought-provoking cannot evolve over time and thus require an ever-evolving application of the statute.

When applied to an ongoing actual rule, Justice Scalia's Queen Anne example actually highlights the importance and flexibility of framing in legal decision making. We not only have to understand that Queen Anne's words originally meant "awe-inspiring, highly artistic and thought-provoking." We also have to grapple with what those words mean when applied through time. No reasonable person who has studied the liberal arts would contend that artistic standards and thought, for example, do not evolve over time. Nor would such a reasonable person deny that reasonable people might have different frames for high art or provoking thought in any given post-Anne era. This battle of frames takes us well beyond any period dictionary Queen Anne might have been holding when using her original words.

Before touching a bit more on such framing problems for original meaning in the context of an on-going law, one of course must pause at why technology alone is allowed to evolve under Justice Scalia's notion of original meaning. I could explore the arbitrariness of this exclusion, but I think more interesting points can be made if we just give him the exception for the sake of argument. According to the American Heritage College Dictionary, a primary definition of "technology" is "[t]he application of science, esp. to industrial or commercial objectives." Since Justice Scalia would presumably be impartial and not favor industrial or commercial parties over non-industrial or non-commercial ones when it comes to the flexibility of the law, one can reasonably assume that he means "the application of science" when he speaks of technology. According to that same dictionary, a primary definition of "science" is "[t]he observation, identification, description, experimental investigation, and theoretical investigation of phenomena." According to that same dictionary, "phenomena" is the plural of "phenomenon" a primary definition of which is "[a]n occurrence, a circumstance or a fact that is perceptible by the senses." In other words, this includes anything perceptible to the senses. On its face, this excludes no perceptible changes and developments including perceptible changes and developments in both language, thought, and morality. The exception thus swallows up the rule.

Returning to frames, reasonable people understand that everything changes in this ephemeral world. In light of that understanding, unless I expressly frame a reference to Justice Scalia as limited to the man as he existed at noon on July 9, 2015, reasonable people will frame my references to him to be the man known as Scalia who changes over time. As at least ordinary people use language, the default reference frame of a term is thus the reference over time unless otherwise expressly qualified, and original meaning therefore has things backwards. Since our Constitution, for example, does not provide that its meanings are frozen in time, claiming they are frozen in time defies the very original meaning Justice Scalia purports to follow.

For example, Abraham Lincoln read the Declaration of Independence's provision that "all men are created equal" to include blacks. He believed the signers included "... the right, so that the enforcement of it [with respect to blacks] might follow as fast as circumstances should permit." Senator Douglas disagreed, reading "men" to mean only white men. To a reasonable person at the time the Declaration was written, which man was more accurately reading the words "in their full context"? Lincoln saw a broader evolutionary context while Douglas did not. Since Lincoln and Douglas (both presumably reasonable people) could not agree on what the context meant at the time, how can we expect to do better than these historical figures?

Ironically, in his book purporting "to narrow the range of acceptable judicial decision-making and acceptable argumentation," Justice Scalia surprisingly gives us multiple and not entirely-consistent definitions of "original meaning." For example, Justice Scalia also defines his approach as "[t]he doctrine that words are to be given the meaning they had when they were adopted; specif., the canon that a legal text should be interpreted through the historical ascertainment of the meaning that it would have conveyed to a fully informed observer at the time when the text first took effect." This formulation has peculiar problems over and beyond those just explored. First, there is no express mention of context. Can we really think, for example, that we can understand phrases like "John has a vice" without reference to context? Second, what does "fully informed" mean? There is of course no objective, impartial definition of this qualifier for each situation in which it might apply. Weren't both Lincoln and Douglas likely fully informed in the earlier example? Third, "at the time when the text first took effect" contradicts the adoption language at the beginning of the definition. Which is it? This is not just an academic question since statutes, for example, can have delayed effective dates.

For example: a legislature wishing to combat the spread of an invasive foreign plant species called "Scalia grass" (named let's say after naturalist Ebenezer Scalia of no relation to the Justice) passes a statute called the "Scalia Grass Control Act." That act prohibits "the planting of non-native grasses" (using the broader phrase than "Scalia grass" to pick up other invasive species in addition to the species of primary concern). To give fair notice of the new restriction, it makes the statute effective one year later. During that one year period, scientists determine that "Scalia grass" is not a grass but a fern, this receives wide public notice, and ordinary, reasonable people immediately thereafter cease to consider "Scalia grass" a grass. Under Justice Scalia's alternative definition, "Scalia grass" might both be prohibited by the statute since it was considered a grass when the statute was passed yet not be prohibited by the statute since the understood meaning of the term had changed by the statute's effective date. Alternatively, "Scalia grass" might never have been prohibited by the statute at all if one considers it reasonable to look at how the term was used for some "reasonable" period both before and after the statute was passed. Of course, no such scenario makes sense. Under Justice Scalia's approach, we either have a contradiction or a statute entitled the "Scalia Grass Control Act," passed for the clear purpose of controlling Scalia grass, yet not applying to Scalia grass.

In yet another definition of original meaning in his most recent book, Justice Scalia speaks not of a "fully informed observer" but of an understanding ". . . reflecting what an informed, reasonable member of the community would have understood at the time of adoption according to then-prevailing linguistic meanings and interpretive principles." Of course, "informed," "reasonable," "member," and "community" have no given or natural definitions. Are conservatives informed while liberals are not? Or is it the reverse? Or are both informed? If so, who is right when they disagree? There also is no clear answer about "then-prevailing" interpretive principles. For example, great philosophers such as Hobbes, Locke, and Berkeley had their own various views about how language works--which of these views (or perhaps some other philosopher's view) was the one "then-prevailing"? Even if there had been one prevailing view of the workings of language and interpretation, shouldn't we only follow it if it is correct? Shouldn't the question be keyed to interpretive theory that really works? Of course, since original meaning does not work, we can understand why Justice Scalia does not require such workability.

Finally, however guised, Justice Scalia claims that original meaning ". . .will narrow the range of acceptable judicial decision-making and acceptable argumentation. It will curb -- even reverse -- the tendency of judges to imbue authoritative texts with their own policy preferences." This is simply not true. To the extent original meaning disregards other relevant facts and materials beyond the text itself, original meaning gives the judge a freer interpretive hand. This is not a difficult point to grasp. Consider the following drawing: 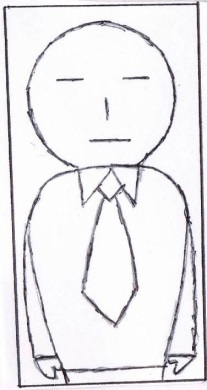 If we are restricted to the drawing itself when we make our interpretation, we might conclude that it is a drawing of anything from a male mannequin to a dead woman laid out in men's clothes. However, if we must also consider the artist's statement that she drew a picture of her sleeping uncle, our reasonable interpretive discretion is greatly reduced. As Justice Stevens (citing Aharon Barak of the Supreme Court of Israel) has deftly stated:

"... [T]he 'minimalist' judge 'who holds that the purpose of the statute may be learned only from its language' has more discretion than the judge 'who will seek guidance from every reliable source.' . . . . A method of statutory interpretation that is deliberately uninformed, and hence unconstrained, may produce a result that is consistent with a court's own views of how things should be, but it may also defeat the very purpose for which a provision was enacted."

Let's therefore call out original meaning as not only a flawed doctrine, but as a doctrine which actually gives judges more freedom to advance (consciously or unconsciously) their own agendas. For those who would like to read more on the limits of originalism, this article is largely drawn from portions of my "Plane" Meaning and Thought: Real-World Semantics and Fictions of Originalism. I have also examined originalism in more detail (including views of Justice Thomas) in 'Original' Means Old, 'Original' Means New: An 'Original' Look at What 'Originalists' Do.

Ed Sheeran Has COVID, Will Do Performances From Home