I received this excellent piece from one of my colleagues at Success Academy. I am proud to work with her and the thousands of others who fight to provide high quality educational options to all children. 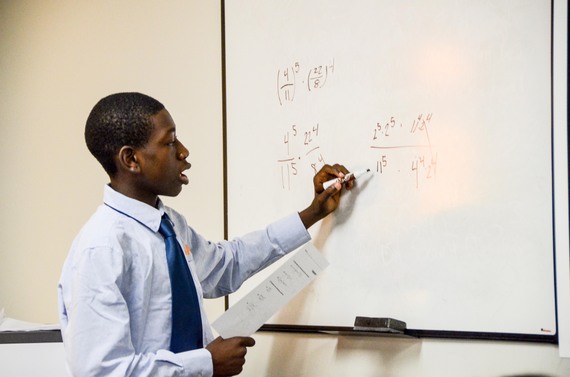 When I was an admissions officer at Williams College, the most difficult conversations centered on whether a particular student would be successful on our campus. Our applicants were talented and hardworking, and it was heartbreaking when in some cases - particularly for students of color - their urban public high schools had not prepared them for the academic rigor of Williams. Sometimes, we were able to admit these deserving students, and many flourished on campus. Other times, unfortunately, we knew the gaps in their preparation were too large.

Admissions committees at every selective college in the country, including the University of Texas, have to make heartrending decisions about students like these. But in those discussions, it's never a question of race; the issue is lack of opportunity. It is not that these students are deficient in capability or intellect; it's that society has failed them by allowing public schools to deny them the tools they need for postsecondary success.

The language used by Justice Antonin Scalia in oral arguments on Wednesday turns that reasoning on its head. With but a few racially suspect words, he undercut the entire rationale for affirmative action: Why give black students a chance to overcome deficits if they are inherently incapable of meeting the challenge? By changing lack of opportunity into a matter of biology, he resurrected racist underpinnings of constitutional law that were discredited long ago.

Take Justice Scalia's words: "It does not benefit African-Americans to - to get them into the University of Texas where they do not do well, as opposed to having them go to a less-advanced school, a less - a slower-track school where they do well."

Now, compare his words to this much earlier evaluation of African-Americans' inherent ability: "The White, or Caucasian, is the most elevated, and the Negro the most subordinate of all the Races in their organic structure, and therefore in their faculties...when we...impiously strive to degrade our race down, or to force the Negro up...we are blindly striving to reverse the natural order."

This quote was taken from "The Negro's Place in Nature," a pro-slavery pamphlet, published in 1866.

This is the same line of thinking that later produced minstrel caricatures of the lazy black person as personified by Stepin Fetchit and justified the "separate but equal" doctrine of segregated education. More than 50 years after Brown v. Board of Education, Justice Scalia's statements, and the briefs he chose to endorse, uphold this foul legacy of white supremacy; it is an attempt to use the dehumanization of an entire racial group as grounds for determining the constitutionality of a policy.

Coming from a sitting Supreme Court justice, what does this tell our black children? That they are deserving only of a second-rate education; that they are not able to achieve at the highest levels; that the American dream does not apply to them. What does it tell our non-black students? It gives them the green light to automatically assume their black peers are inferior, naturally less capable. What does it tell our university professors? It gives them an excuse to hold black students to lower standards, to deny them access to competitive research projects and other plum positions.

Battling this type of bigoted thinking is why I chose to leave college admissions and become director of college access and persistence at Success Academy Charter Schools. I wanted to work with younger students, to ensure they had opportunities earlier in life. The majority of my scholars are students of color; many will be the first in their families to earn a college degree. My students, who mostly hail from Harlem and the South Bronx, have access to a free, world-class education that will give them the grounding to thrive in any college or university. They already test in the top 1% and 3% in New York State for math and reading. We are proving that, with opportunity, any student of any skin color can be successful.

I am sickened that the highest court in the land would tell my students otherwise.