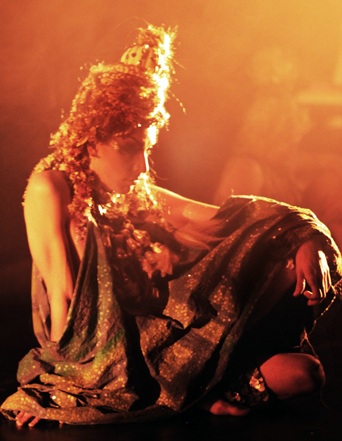 Before the doors even opened, high priestess queens were traipsing through the lobby of the Kitchen in full regalia. The show had not started, but they were already on - shaving thighs on stage, spiraling leg lifts, blowing kisses doused in glitter. One lovely glides by the pre-show speedy catch-ups between audience members to push her smooth man-girl hip between my friend and me: "A few dollars for the high priestess?" s-he says. Straight from a full day at the office on an unseasonably muggy weekday night in Manhattan, I barely knew if I could handle this show right then- particularly third row center. My friend quickly offers a bill, which I diffidently tuck into her shimmery gear. Satisfied, Ms. Priestess jingles off between the aisles. And then, with drumming and guitar, the show began. Or rather, I should say: And then, the cosmos of the Gallis - the mythological gender variant priest/esses of the Roman goddess Cybelle - opened up to swallow us whole in a single gulp. 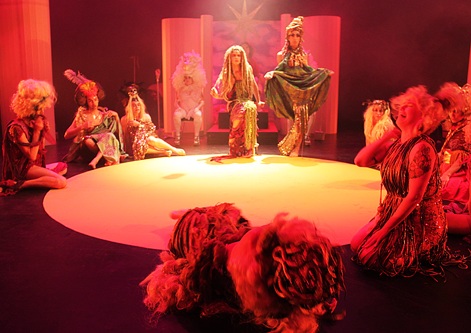 Faith healer Kathryn Kuhlman, based on a Missouri-born evangelist from the 1960s - re-appropriated/inhabited by Justin Bond - sits perfectly poised upstage on her throne flanked by iridescent white lions. (Incidentally, Mx. Bond should always be guarded like so.) Kuhlman steps forward into the inner circle of extravagantly ornate sacred temple priest/esses/whores - each with their own size, shape, and, of course, headdress - and drawls: While doing the work of healing, our concern should not be not revivalism - but restoration. She explains to us (audience and sacred whores alike) that we have entered into a ritual of healing, a ritual to lift the tragic curse cast upon the special ones - the queer, the trans, the femme. 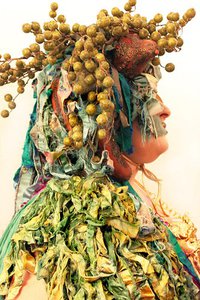 And so the story unfolds around how the Galli got snatched into a hot mess of unrequited desire gone mad; consequently cast out of their temple and homes, to be hidden away and reviled for years to come. Each song and dance by the gifted performers of the House of Whimsey deserves its own discussion - from the Taiwanese sword dance and Arabic-wristed ballroom vogue, to the spellbinding witchcraft where masks of freaks and skeletons are peeled off in the service of self-castration and a single fatal trance. If the precise narrative intent of the scenes eclipsed the intellect, the emotion evoked nevertheless tucked itself squarely into my gut. Machine Dazzle's textured set design and costumes together with Ben Kato's dreamy lighting marry the Galli with their world - an exquisite ecosphere delicately in balance with its excess, where femme glamour unabashedly tangles with organic matter. I am giddily beholden to this union of easy beauty alongside sexualities and genders that unrepentantly defy fixed orientation.

And then, at the very moment we assume the performance has come to a close and a hearty applause is in order, the House of Whimsy performers line up downstage. They are gleaming sweat and sparkle, but not yet ready to bow or curtsy goodnight. After all, they came to be healed. With her pristine white dress now streaked crimson, Kuhlman relinquishes herself and Justin Bond re-enters her space. 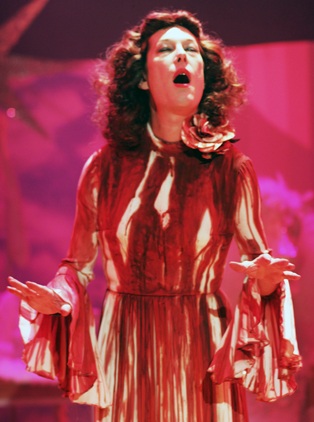 Kuhlman/Bond asks each of them: "How has femme-phobia, trans-phobia, and homophobia affected your life?" The performers also re-inhabit themselves - now as the living legacy of the cursed, denied, and cast out forbearers they occupied minutes earlier. In an instant, the artifice falls and a lineage is traced. The performers each respond in their own voices with earnestness so candid it first appeared disingenuous. Beyond the spectacle and glory of performance, the very necessary lives of actual femme, trans, and queer people are at stake. As a healer in her own right, Mx. Bond sprinkles affirmations of love and gratitude, blessing them one by one, and thanking them for their persevering presence in a society that has tried so hard (and so unsuccessfully) to conquer and destroy their beauty.

It is in this way that the myth of the Galli places misogyny - plainly speaking, the hatred and fear of femininity and womanhood - into a much needed imagined historical context. The catastrophe of misogyny is foremost the loss of our collective sense of humanity - our ability to see ourselves reflected in each other. The intent is not to bring back to life that which is gone, but to restore that which has always been present but buried. Mx. Bond describes how we are laced together by an invisible golden thread strung directly through each of our hearts. Infusing magic into whatever space s/he parts open for believers-in-training, s/he blesses the audience as well - interpolating our bodies into the continuum of this myth/life of beauty, grief, and faith - so that we too may be restored.

In the end, my heart lay chiseled out of my chest - juicy, raw, and bleeding all over the theatre seat. It's prudent to remember that while one can hardly be ready for Bond's performances, the soul sits hungrily waiting nonetheless.

Justin Bond is an Obie, Bessie and Ethyl Eichelberger Award-winner, and toured the world as one-half of the Performance duo Kiki and Herb (headlining at Carnegie Hall twice). Film credits include a starring role in John Cameron Mitchell's Shortbus (2006) and Charles Hermann-Wurmfeld's Fanci's Persuasion (1995).