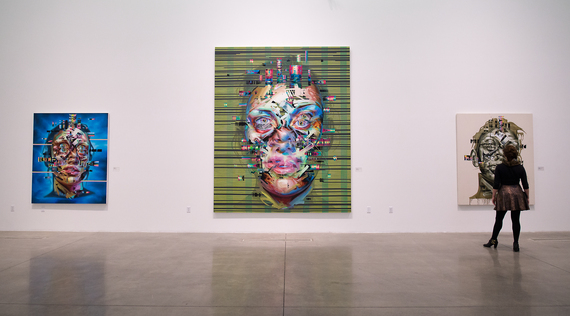 Justin Bower has an unmistakable style of recombinant refinement and prismatic, cybernautic lyricism, centered around monumental portraits that resemble the gods worshipped by a future race of human/robot hybrids, their gestural, architectonic armatures pulled apart to reveal the form taken by consciousness. Now this significant mid-career survey examines his work of the past five years -- arguably the most salient of his studio career. 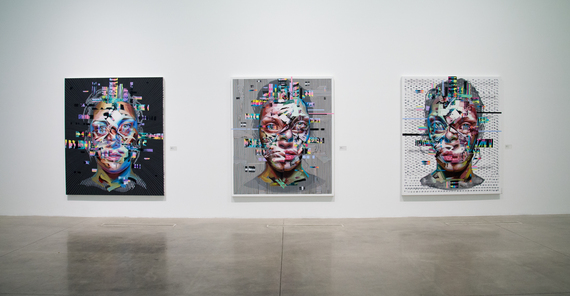 This assembly of majestic works from 2010-2015 takes core samples across the terrain of those years, chronicling the reign of the colossal heads, from their early, grotesquely protean and emotionally visceral maturity, later becoming more genteel and alluring, all the while in variable contrapuntal harmonics with the energetic flow of complex, abstract grounds through periods of alternately high-tech, painterly, kaleidoscopic, auric, geometric, psychedelic, palimpsestic, planar, intensely patterned variations on abstract fever dreams. As for the faces, the gods, they seem mostly to smile now, though with the ambivalently wry challenge of a doe-eyed Mona Lisa, in an idealized pout, at the towering scale of Mount Olympus or IMAX. 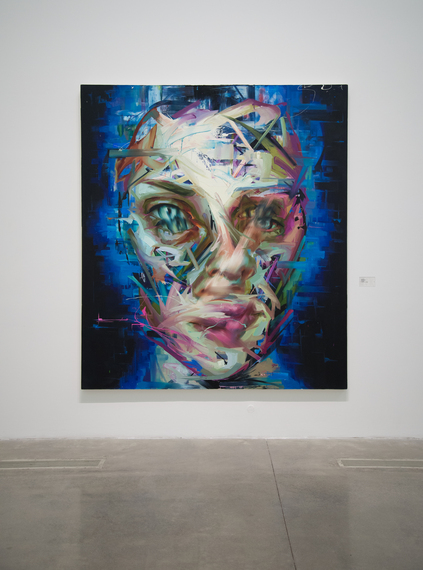 The illusion of double exposures and the choreography of fractal refractions is executed in huge fat wet brushstrokes deploying pure supersaturated pigments like scaled-up crosshatching. As though the bone structure were on the outside, they pulse and stay crisp even as they riotously intermingle. In earlier works the teeth are exposed in glistening hyperrealism, with the result of zooming the viewer's focus to the interior space of the mouth, even as the rest of the head threatens to blow apart into splinters, piercing the backgrounds of solid colors that set off the rest by dissonance -- ruby and teal, lavender and pistachio, and other holographic oil slicks. In the works with patterned backgrounds, stencils, arabesques, interference stripes, bubbles, grids, neon halos, and a panoply of stripes are hyper-collaged in woven layers, as maximalist as the heads themselves, but always in a counterintuitive syntax that amplifies dissonance chords into a symphony. 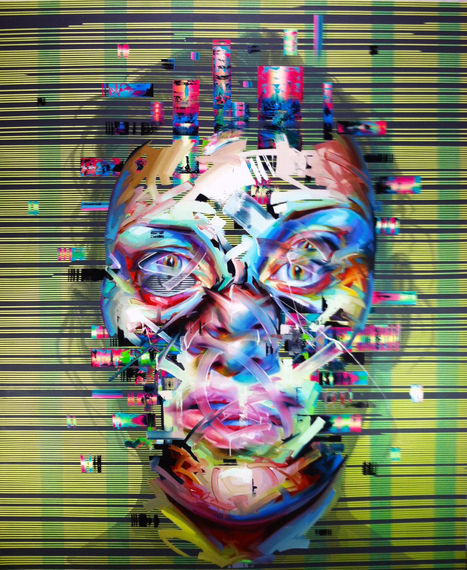 And there is a certain operatic classicism to Bower's sense of scale and style of hyperactive abstraction; but he figured out a way to press this into the service of figurative portraiture. Despite this allegorical premise, all the energy is in the technique, the facture, the hand of the artist, expressing a performative presence that is both somber and meticulous, fractal and rapturous. Like each head is a collapsing opal mine, like individual Big Bangs creating prismatic molecular universes, Bower's heroic, violently surreal physiognomies hover like a death stars shot through with rainbows. 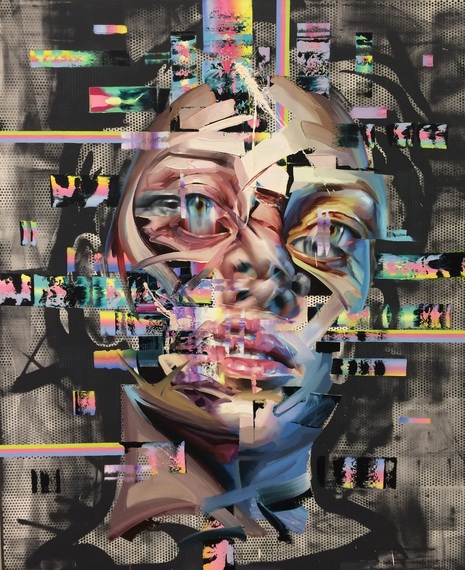 The titles do their share as well in moving the story forward by carrying germane suggestions for interpretation like: Feedback Loop, Vivisection, Decoder Debaser, Code No Code, Spaceboy, Acid Test, Illuminati, The Systemic Archaeologist, In Pursuit of New Pathologies, The Inevitable Possibility of Holding Several Positions at Once, The Dissolution (Study), A Divine Prosthesis, Replicant, Deep Belief Networks, Ontological Hygiene, Cleanliness, and Godliness. These linguistic breadcrumbs place the viewer in the overlapping realms of neurology, technology, and consciousness; the paintings both show and tell this as they vibrate like Op-Art or laser beams, one feels the anatomical eye as it physically engages in the act of seeing, sparking an internal dialectic, noticing the quality of attention -- merging all platforms of perception into a single channel, and finally projecting it back onto the classical art historical touchstone that is the human face. 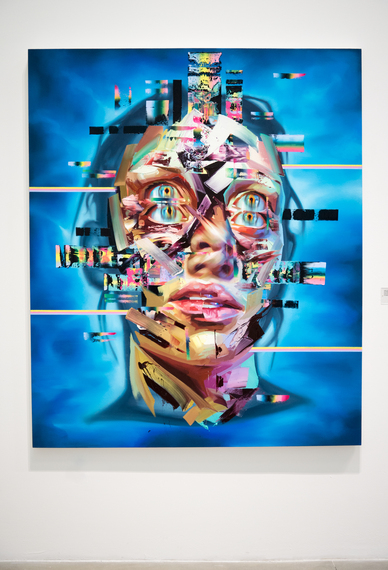 JUSTIN BOWER IS ON VIEW AT MOAH LANCASTER THROUGH JANUARY 24, AS PART OF A CLUSTER OF EXHIBITIONS ON THE THEME OF VANITY.

A gallery talk with the author and the artist takes place SUNDAY, JANUARY 17 at 2PM.