CANTERBURY, England, March 21 (Reuters) - The new spiritual leader of the world's Anglicans was enthroned by a female cleric on Thursday, taking the helm at a time when the troubled church risks tearing itself apart over gay marriage and women bishops.

For the first time in the Christian church's history, the priest who placed him on the diocesan throne in Canterbury - the mother church of the Church of England and of the Anglican Communion - was a woman, Archdeacon of Canterbury Sheila Watson.

Another, male, priest then installed Welby in the chair of St. Augustine, marking his inauguration as Primate of All England and spiritual leader of the worldwide Anglican Communion.

Welby, who is against gay marriage but favours the ordination of women as bishops, now faces a tough balancing act to keep the 80 million-strong Anglican Communion together.

The Archbishop finds himself in the crossfire between liberal clerics in the United States and Britain who are at odds with conservatives in Africa and elsewhere over those issues, and his handling of the dispute is set to dominate his tenure.

Homosexuality is the most divisive issue, and senior African Anglican leaders have already lined up to denounce a decision to allow celibate gay bishops, saying it would only widen the rift.

"It's true that not all the African bishops, but quite a number of African bishops are strongly opposed to the way you understand sexuality in the West," Solomon Tilewa Johnson, Archbishop and Primate of the West Africa section of the Anglican Communion, told Reuters on the eve of the ceremony.

Others at the ceremony, attended by Prime Minister David Cameron and members of the royal family, were more optimistic.

"He's a bridge-builder and a reconciler," Josiah Idowu-Fearon, Archbishop of Kaduna in Nigeria - effectively the largest province in the Communion - told the BBC.

"It is a good description to call it a holy anarchy," he added, referring to a phrase coined by Welby himself. "And how is he going to put all that together? We wait and see."

Pope Francis, who was formally installed as head of the world's 1.2 billion Roman Catholics about a week ago, sent Welby a message from the Vatican to congratulate him.

"Please be assured of my prayers as you take up your new responsibilities, and I ask you to pray for me as I respond to the new call that the Lord has addressed to me," he said.

"I look forward to meeting you in the near future, and to continuing the warm fraternal relations that our predecessors enjoyed."

Welby is seen as a pragmatic and down-to-earth trouble-shooter, hardened by years of work as a crisis negotiator in Africa among separatists in the swamps of the Niger Delta and Islamists in northern Nigeria.

His life changed dramatically in 1983 when his daughter was killed in a car accident, an event he described as a "dark time" which brought him and his wife closer to God.

The bespectacled and soft-spoken Welby inherits a church struggling with falling congregation numbers in an increasingly secular society where many see religion as irrelevant.

The church now counts about 26 million baptised members, but says only about a million of them attend services every Sunday.

Born in London in 1956, he was educated at the elite Eton College, and went on to study history and law at Cambridge University. His father's family were German-Jewish immigrants who fled persecution to England in the 19th century.

Just hours before the ceremony, Welby spoke out publicly about gay marriage, offering a softer stance on the issue.

"You see gay relationships that are just stunning in the quality of the relationship," he told the BBC, while stressing he had no doubts over the church's policy on same-sex relationships.

"The Church of England holds very firmly, and continues to hold to the view, that marriage is a lifelong union of one man to one woman." (Additional reporting by Philip Pullella; Writing by Maria Golovnina, editing by Paul Casciato) 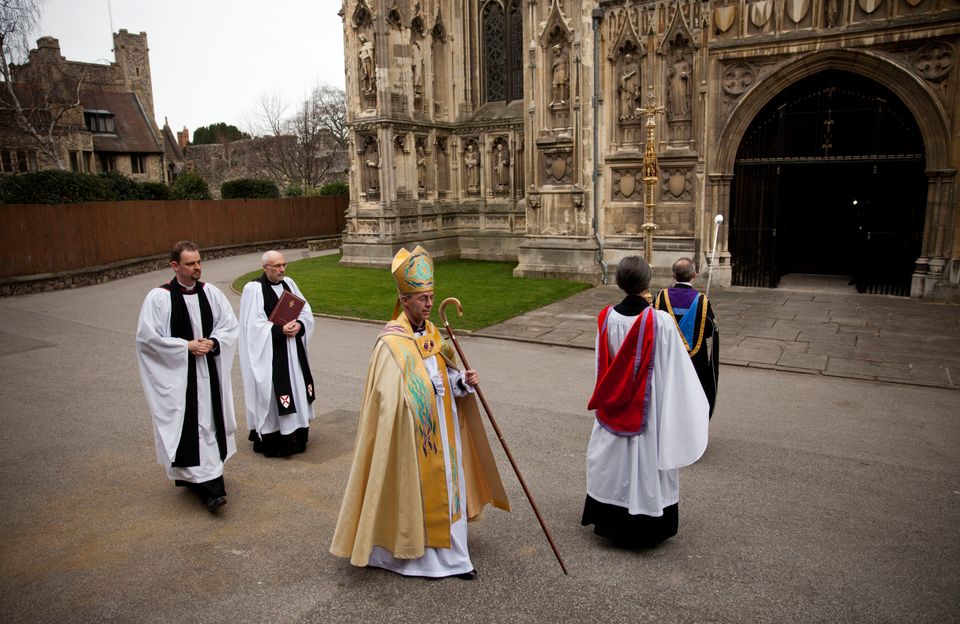