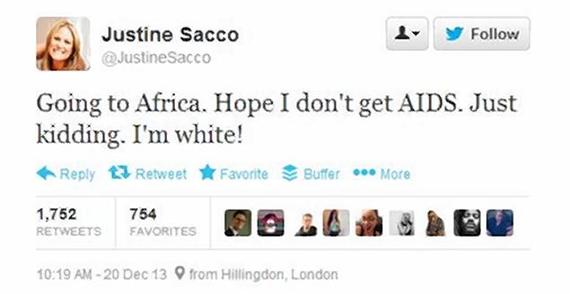 Justine Sacco, the PR executive whose hateful and hurtful Tweet about AIDS in Africa that went viral on the Internet has been fired. In case you've been under the radar and missed the Tweet heard 'round the world, Sacco managed to do something that is really hard to do -- insult a race of people, a nation and an entire continent simultaneously. This type of tomfoolery, and from a public relations executive at a media company no less, reflects more than just the ability of those who lack common sense and decency to climb the corporate ladder. It also reflects the comfort that people like Sacco have with making ignorant comments under the guise of being funny. Sacco's poor attempt at being funny turned into a comedy of errors for her with the swift rebuke of the Twitterverse for her hateful comments.

When I first read about the tweet, I immediately thought of my father who always says, "Be careful about what you say because the mouth sometimes works faster than the brain." In this case, it wasn't just Sacco's mouth, it was social media that worked faster than her brain when she decided to make public her private discriminatory thoughts. She misjudged her audience, thinking that the entire world would understand the intention of her "joke." Communications 101 teaches that the intent of the message that is sent does not matter nearly as much as how the message is received by the recipient.

What Sacco tweeted was actually beyond stupid, it was idiotic and hurtful. Sacco's comments represent some of the most vile stereotypes and ideologies about African people that exist. This so-called public relations executive exercised even more poor decision making by offering these comments en route to South Africa, the week following the burial of world leader and civil rights icon Nelson Mandela. To suggest that the HIV/AIDS crisis in Africa is due to unprotected sex diminishes the seriousness of the crisis. Millions of people are dying each year from HIV in Africa. Nearly 15 percent of South Africa's population is HIV positive, that's almost 6 million people. Her tweet demonstrates that she knows very little about the HIV/AIDS crisis in Africa. Since she clearly doesn't understand, I'll make it plain for her with an example she can understand; imagine that 75 percent of the people living in the city of London were HIV positive. Would that be funny?

Now consider something she may or may not know; so many people are dying in South Africa from HIV/AIDS and other illnesses that some cemeteries are now burying caskets in the upright position due to the lack of adequate land space to accommodate the number of deaths. Now is that funny?

Further the idea that whites don't have or can't get H.I.V. is preposterous. According to the National AIDS Trust, 50 percent of those newly diagnosed with HIV in the UK in 2011 were white. The largest proportion of new diagnoses in 2012 were due to sex between men (47 percent), followed by heterosexual sex (41 percent). Sacco doesn't have to worry about getting HIV in Africa, because she may want to pay attention to what's going on in London. Sacco need not think that whiteness will protect her from HIV, because unlike Sacco, HIV/AIDS does not discriminate, and that's no laughing matter.

Since it has become painfully clear that Sacco didn't pay enough attention to the cultural awareness and sensitivity sections of her introductory public relations courses -- yes, she has made an insensitive Tweet before and kept her job -- hopefully she paid close attention to the section on crisis management, because she's going to need it to climb out of this hole she's dug for herself.

This post was written by Nsenga K. Burton, Ph.D., founder & editor-in-chief of The Burton Wire, an award-winning news site that covers news of the African Diaspora.