By Mirwais Harooni and Samar Zwak

KABUL, June 22 (Reuters) - Elite Afghan police backed by NATO forces ended a 12-hour siege on Friday at a popular lakeside hotel outside Kabul, leaving at least 20 dead after Taliban gunmen stormed the lakeside building, bursting into a party and seizing dozens of hostages.

The night-time assault on the hotel with rocket-propelled grenades, suicide vests and machine guns again proved how potent the Islamist insurgency remains after a decade of war.

The commander of NATO forces in Afghanistan said the attack bore the signature of the Taliban-linked Haqqani group that he said continued to operate from Pakistan, a charge that could further escalate tensions with Islamabad.

General John Allen's comments come days after U.S. Defense Secretary Leon Panetta said Washington was at the limits of its patience with Pakistan over the existence of militant networks including the Haqqanis.

Pakistan says it is doing everything it can to fight militants on its side of the border and accuses Afghanistan of trying to shift the blame for its failure to combat the insurgency.

At the hotel, terrified guests jumped into the lake in the darkness to escape the carnage, Afghan officials and residents said. Up to 300 people had been inside the hotel when the attack began.

The attack, quickly claimed by the Afghan Taliban, again showed the ability of insurgents to stage high-profile raids even as NATO nations prepare to withdraw most of their combat troops by the end of 2014 and leave Afghans to lead the fight.

"Afghan National Security Forces and coalition military sources acknowledge that this attack bears the signature of the Haqqani network, which continues to target and kill innocent Afghans and blatantly violate Afghan sovereignty from the safety of Pakistan," General Allen said in a statement.

Blood was splattered over the hotel floor and the crumpled body of a man lay in the garden. Women and children were among the wounded.

"We heard a heavy explosion from a rocket-propelled grenade. We tried to escape, but we were surrounded by suicide bombers. We hid ourselves behind a tree until morning. God protected us," said Abdullah Samadi, 24.

The gunmen, Samadi said, had been closely watching their prisoners and searching for illegal stocks of wine.

"Around dawn they came closer to us and we had to jump in the water. We were there until 9 a.m. and then the situation got better and we slowly, slowly swam toward security forces," he said.

Sediqqi said the Taliban were using civilians as human shields to defend themselves and held about 50 people hostage late into Friday morning.

Elite Afghan quick-response police backed by NATO troops freed at least 35 hostages in an operation that only began in earnest after sunrise to help security forces avoid civilian deaths in night-time confusion.

The Taliban complained wealthy Afghans and foreigners used the hotel, about 10 km (6 miles) from the centre of Kabul, for "prostitution" and "wild parties" ahead of the Friday religious day holiday.

Launching their annual offensive this spring, the Taliban threatened to attack more government officials and rich Afghans, but the hotel assault was one of few in which multiple hostages were taken since the start of the war, now in its 11th year.

President Hamid Karzai said attacking a place where people went for picnics was a sign of defeat for the enemies of Afghanistan.

"This is a crime against humanity because they targeted children, women and civilians picnicking at the lake. There wasn't even a single soldier around there," said General Mohammad Zahir, head of the Kabul police investigation unit.

Television pictures showed several people wading out of the lake onto a balcony and clambering over a wall to safety.

NATO attack helicopters could be seen over the single-story hotel building and a balcony popular with guests for its sunset views, while a pall of smoke rose into the air.

Soldiers and police fanned out around the hotel at dawn, arriving in cars and armoured Humvee vehicles and taking cover behind trees flanking the lake and a nearby golf course.

Qargha Lake is one of Kabul's few options for weekend getaways. Restaurants and hotels that dot the shore are popular with Afghan government officials and businessmen, particularly on Thursday nights.

Guests at the Spozhmai must pass through security checks before entering the hotel, where tables with umbrellas overlook the water, but security is relatively light for a city vulnerable to militant attacks.

Violence across Afghanistan has surged in recent days, with three U.S. soldiers and more than a dozen civilians killed in successive attacks, mostly in the country's east, where NATO-led forces have focused their efforts during the summer fighting months.

NATO commanders, halfway into the process of transferring security responsibility to Afghan forces, are racing through training for the Afghan army and police, including holding basic literacy classes for recruits.

Well-planned assaults in Kabul in the past year have raised questions about whether the Taliban and their al Qaeda-linked Haqqani network allies have shifted tactics to embrace attacks on landmarks, foreigners and Afghanistan's elite, extending a guerrilla war once primarily waged in the countryside. (Additional reporting by Hamid Shalizi and Abdul Saboor; Writing by Rob Taylor,Missy Ryan and Sanjeev Miglani; Editing by Sanjeev Miglani and Ron Popeski) 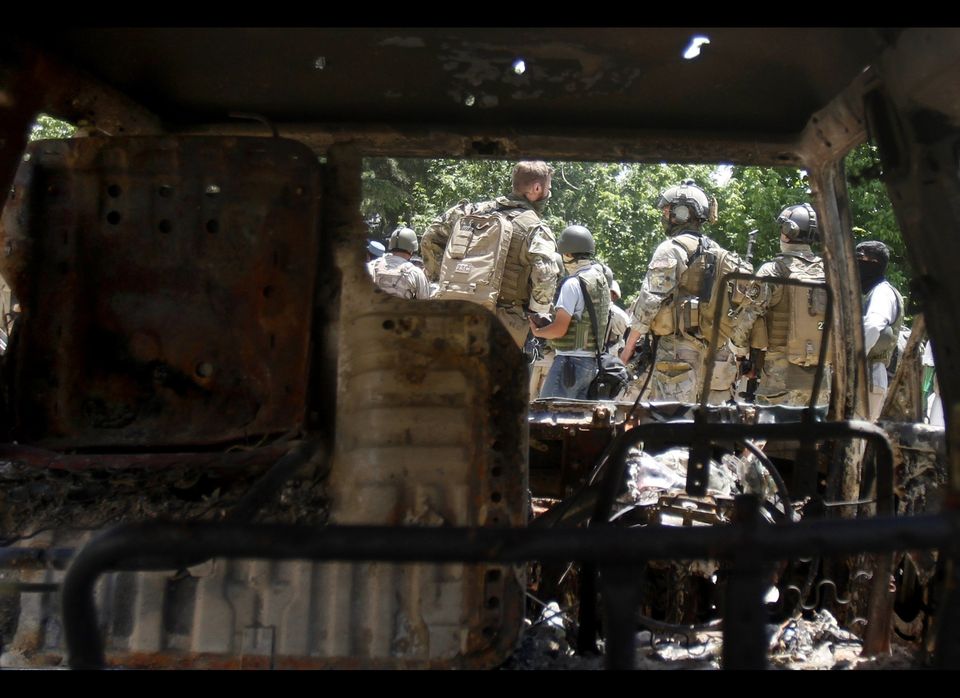 1 / 7
Soldiers from NATO-led forces are seen through the remains of a burnt vehicle outside the Spozhmai hotel on Lake Qargha where security officials say Taliban insurgents have killed almost two dozen people, most of them civilians, in an attack that began before midnight on Thursday, just north of Kabul, Afghanistan, Friday, June, 22, 2012. (AP Photo/Ahmad Jamshid)
AP