In case you haven't been on the internet in the last two years, you should be aware that some things have changed. Streaming music has gotten way more awesome. Top-secret government documents were made available to the public and it caused quite a stir. "Trending" has become a disturbingly popular social media-related word. Finally, and perhaps most importantly, stylish men have begun to take on new levels of accessorizing that are playful, elegant, and retro yet innovative.

That said, let me now introduce you to Kadeem Johnson, creator of the blog K.john LaSoul and overall uber-stylish dude: 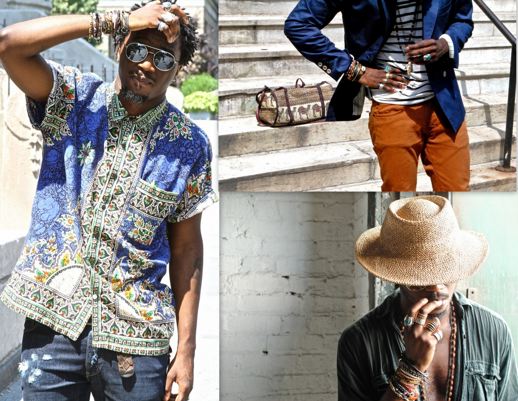 For many in the blogging world, this 22-year-old Bronx native is hailed as the young godfather of men's accessorizing. His right wrist is adorned with bracelets (of which there are currently 17) made from cloth, leather, wood and metal -- and they breathe the air of friendships and history and sentimentality. His stacked thrifted and vintage rings grace his fingers on both hands and suggest an affinity for, and flirtation with, turquoise and coral.

Take a journey through his Facebook albums and you'll see that Johnson has not, however, always been so robustly-accessorized. He started wearing bracelets in 2008, during his sophomore year in college: "I went to school upstate and used to see the hippie kids with woven hand-made bracelets, so I started making those on my own," Johnson recalled. Though the average lifespan of one of his cloth bracelets only lasted about one month, Johnson continued to accumulate wrist-wear and watched his collection grow. However, it wasn't until he saw an image of Kevin Stewart (former fashion director at ESPN Magazine) on the popular streetstyle blog The Sartorialist, that he truly became a dedicated bracelet man. "There was a shot of [Kevin] with a button up shirt, his sleeves rolled all the way up, and gold bracelets. I thought wow, I want to be just like him."

The rings have a completely different narrative. Johnson's ring habit didn't emerge until last year -- and, save a few purchases from the early days, he dons all 9 of them daily. Unlike his bracelets, which have been mostly traded or given to him by his friends, Johnson's ring collection was fully purchased by himself in thrift or vintage stores.

The Golden Question: Does Kadeem Johnson sleep fully accessorized? Nope. The rings come off each night, as do the majority of the bracelets. When he hits the sheets, he says, "there aren't many left on my wrist -- I'd say about 85% of them come off. And most people think it takes forever! [Laughs] It only takes about two minutes."

Though Johnson saw the men's accessories trend catching on last summer, he attributes its current popularity to men's fashion magazines: "When GQ or Details Magazine says something is in, then it's in. If they don't, then it's not. Guys follow men's fashion magazines because we don't have much else to go to. Unlike women -- they have magazines, celebrities, models, streetstyle, lots of places. Guys are also now starting to read blogs and get street style inspiration too though."

Want to get this look? Well, this isn't GQ so I'm going to tell you, it's probably best you don't try because you'll most likely get it wrong. Luckily for you, Mr. Johnson is more diplomatic than I am and has some advice for those curious to attempt:

1) Don't over accessorize: if you stack your bracelets (aka wear a whole lot of them) they should still have one cohesive identity.

And with that, comrades, I bid you adieu. Continue to check adventures in accessorizing on Kadeem Johnson's blog here, and for similar stories please do peruse mine as well here.