It’s not often that a new volcano is discovered, especially in the United States. But scientists from the U.S. and France published a study last month saying they’ve found an underwater volcano near the Hawaiian island of Oahu that predates the island's other two by a few million years.

That’s like learning you had a parent that you never knew about! It’s a big deal, especially for geologists, because it helps them more fully "understand the dynamics of how and where Hawaiian volcanoes form, how long they 'live', and their growth histories," John Sinton, lead author of the study and a geologist at the University of Hawaii at Manoa, told the Huffington Post.

Oahu's two iconic mountain ranges that we've come to know and love, Waianae and Koolau, are named for the volcanoes that formed them and are what you see from the plane as you land at the Honolulu Airport.

But underwater, about 62 miles northwest of Kaena Point on the west side of Oahu, rests the remnants of a preceding volcano -- Kaena -- which emerged from the water around 3.5 million years ago and rose to more than 3,000 feet above sea level.

Three million years ago, Oahu was a different shape and "all three volcanoes were emergent," Sinton told Reuters. But "once any volcano stops erupting they continue to sink," he added. "We just don't know when Kaena went underwater." 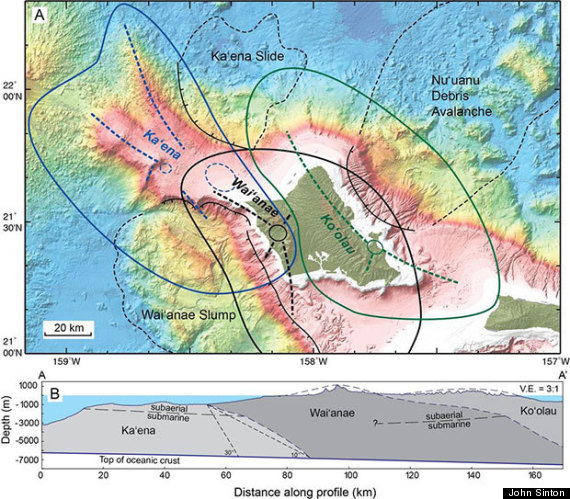 The Kaena volcano changes conceptions about how Oahu, Hawaii's most populated and visited island, was formed. Sinton told HuffPost that this discovery revises previous theories about Waianae volcano. Now that Kaena factors into all of this, "Waianae is slightly more than half as large (in total volume) as previously thought, because a significant volume of what was previously considered Waianae is now known to actually be Kaena," he said.

It's important to study old volcanoes because doing so informs the study of younger, active ones. Older volcanoes tend to be more exposed by erosion, so scientists can see into them and observe spans of history of a "million years or more," Sinton said. "You don't learn much about the aging process by only studying juveniles."

Kaena also gives scientists a chance to study a Hawaiian volcano that apparently only breached late in its history and formed not from a previously existing flank, which is how a majority of the other Hawaiian volcanoes have formed, but on its own on the ocean floor.

“We thought we knew where all the Hawaiian volcanoes were,” Sinton said to Reuters. “And here’s one we didn’t really know about.”