Supreme Court nominee Elena Kagan wrote in 2003 that the court's decision to effectively grant George W. Bush the 2000 election was an example of politics and policy affecting the process of judicial review.

In preparatory notes for remarks she delivered to Princeton alumni in June of that year, the soon-to-be dean of Harvard Law School clearly suggested that in Bush v. Gore, the court strayed from strict judicial mores.

"Courts have indisputable role to play in [governing] system - one check (of many) on dangers of [illegible] majority institutions," the note reads -- with abbreviations spelled out.

"But on other hand.... There does remain a problem. Problem of Platonic Guardians, deciding what we the people can + can't do," Kagan went on. "If Judicial Review were mechanical, [this] wouldn't be issue. 'That's their job.... Read the constitution.... Apply it to prevent majority's attempts to violate it."

"Bush v. Gore is only the tip of the iceberg. It happens all over. And we know it does." 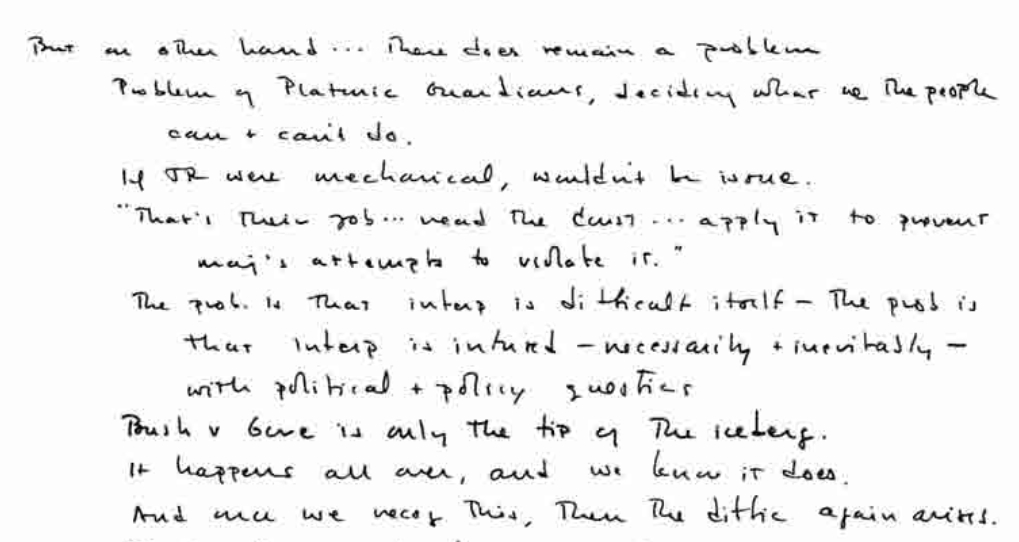 The writing, which was provided as part of a massive disclosure in anticipation of her Supreme Court confirmation, provides one of the first indications to date of Kagan's view of the court's controversial 2000 decision. And while she discussed the case in somewhat academic terms (acknowledging that politics is an inevitable, indeed necessary, part of judicial review), her views very much resemble those offered by critics of the decision. The majority of the court, the traditional critique goes, let politics lead its interpretation of whether the Florida Supreme Court's method for recounting ballots violated the 14th Amendment. The normal constraints of judicial review had been cast aside.

In the weeks ahead, discussion of Kagan's position on the Bush v. Gore case could play a significant role in the process of her confirmation (which begins on June 28) -- in part because the case remains a hot-button issue in American legal circles; but mainly because few other opinions of the Solicitor General are actually known. Indeed, a review of hundreds of pages of Kagan's writings reveals little willingness on her part to weigh in forcefully on the major legal debates of the day. The Harvard dean often played the role of moderator or questioner during legal forums. And when she was asked to approach legal or political questions, she usually did so with caution.

Take, for instance, her appearance on a panel discussion on "Women's Participation at the Supreme Court" in January 2010. Pressed repeatedly on topics of sexism and gender inequality in the legal profession by retired Supreme Court Justice Sandra Day O'Connor, a visibly uncomfortable Kagan chose at one point to turn the tables.

"Can I ask you a question, Justice O'Connor," she interjected. "Do you think women are treated differently on the Supreme Court in any way?"

That said, there are some writings that provide a window into what type of legal philosophy Kagan would bring to the bench should she be confirmed. Writing on the balance of powers in November 2000, she spoke admiringly of a strong executive.

"After [Bush's election]?" she added. "Now this is the part of my argument where I expect some people will raise one eyebrow and say: "Even after Tuesday's election?" And I'll say: "Yes, even after Tuesday's election_" But I'll leave that to the question period and for now state the argument in its starkest form.... Accountability generally: Consider first the question of accountability_ Here, stated briefly, presidential control subjects the bureaucracy to the control mechanism (I) most open to public examination and (2) most responsive to public opinion."

And as the Wall Street Journal reported on Wednesday , Kagan also criticized the Supreme Court's direction under liberal icon Earl Warren -- for much the same reason that she wrote critically of Bush v. Gore.

"Simply put, the criminal justice systems of many of the states offended the ethical sensibilities of the Warren Court," she wrote in her 1983 masters thesis at Oxford. In a range of cases, "the court asserted its right to no less than lead the nation," she added. "Essentially, the Warren Court lacked faith in the ability of the president, the Congress or the state legislatures to guide America in the proper direction."