The moment when a random object comes flying at your head is never a good one. Be it a soccer ball, a falling picture frame or a boot gone awry, the soaring articles feel like the most threatening things in the world as they get closer and closer to hitting you in the face. Photographer Kaija Straumanis did what most of us are too frightened to attempt ourselves. She actually invited objects in the direction of her face, at least for the purposes of a photograph. 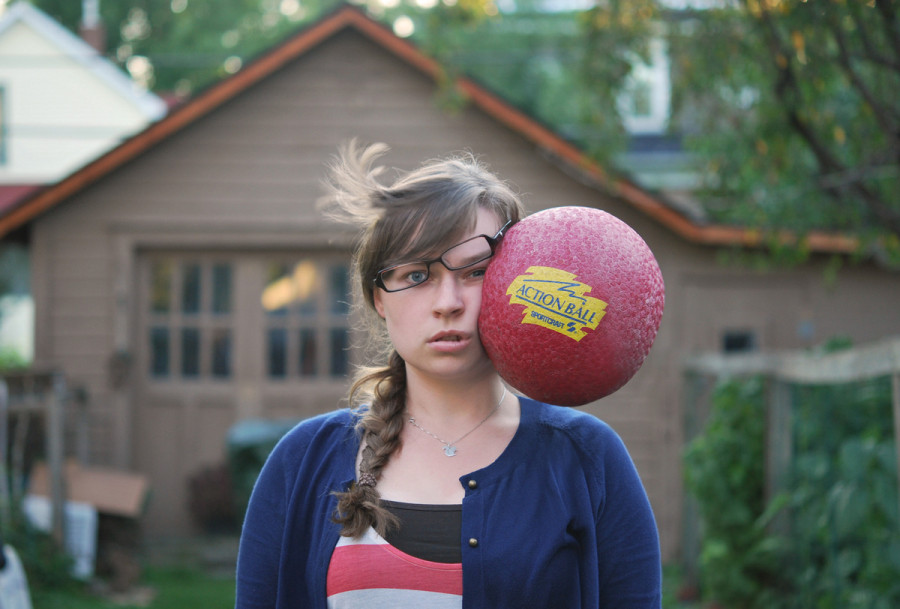 The series, dubbed by the internet as "Stuff Being Thrown at My Head," captures the beautiful disasters, complete with disheveled hair, glasses askew and smushed cheeks. In fact, each moment of impact is staged, weaved together from a series of photographs that are later photoshopped together to feign a real-life collision. Objects including cups, ice scrapers, kickballs and even a jack-o-lantern are all "hurled" in Straumanis' direction, captured in a trajectory in the air and then smushed against Straumanis' face. For the most part, she remains remarkably composed despite the terrifying distraction.

The combination of Straumanis' unfazed expression and her disheveled exterior appearance is comic gold. Aside from being painfully funny, the photos also recall the times when an idea or realization smacks you upside the head out of nowhere. You know the feeling. Take a look at the series below and let us know if you've ever had a metaphorical -- or physical -- hit-in-the-face moment in the comments. We doubt you looked so calm and collected.

Correction: A previous edition of this article misstated that Straumanis was from Latvia, and failed to specify the objects were not actually thrown at the photographer's head. The article has been updated accordingly throughout, and we regret the error.