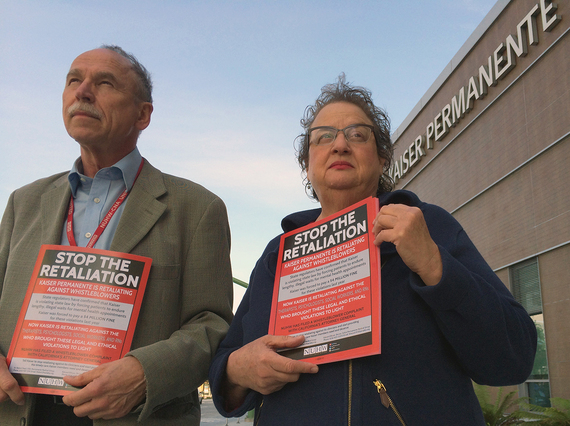 Kaiser Permanente is retaliating against the whistleblowers who brought much-needed scrutiny to the HMO's severely understaffed mental health services.

Kaiser is also retaliating more broadly against whistleblowers by withholding from its mental health clinicians the standard annual wage increases it has given to 90,000 other employees.

This week, clinicians have been picketing and leafleting at Kaiser facilities throughout the state to call on Kaiser to reinstate Dr. Wang. They are also calling on Kaiser to settle a contract with its mental health clinicians that addresses the severe understaffing that has caused lengthy and illegal delays for Kaiser patients and that does not punish caregivers for meeting the ethical obligations of their professions and exercising the clinical judgment for which Kaiser hired them.

Clinicians picketed in Richmond and Oakland Wednesday and in San Francisco and Los Angeles on Thursday.

"We have worked without a contract for three years while Kaiser has fought us tooth-and-nail on these patient care issues," said Clement Papazian, a psychiatric social worker at Kaiser's Oakland Medical Center. "By refusing to address our concerns through internal channels, they pushed us into the role of whistleblowers. Now they want to punish us for going public."

"We don't want to reward employees for the behavior of the last three years," Kaiser officials told clinicians in a recent meeting.

In 2013, Dr. Wang, a psychologist at Kaiser's Fremont clinic, noted in a patient's chart, "Patient should be seen sooner" after discovering the patient would wait more than three weeks for a first-time appointment, which is a violation of state law. Kaiser disciplined Dr. Wang, claiming his clinical note was "political speech," and for the next two years targeted Dr. Wang for a series of performance reviews that questioned his clinical judgment in advocating for more timely appointments for his patients.

"The firing of Dr. Wang is like a punch to the face," said Dr. Andris Skuja, a psychologist at Kaiser's Oakland Medical Center.

This multi-billion-dollar corporation has pounced on a thoughtful, dedicated therapist because he dared to stand up for patients who needed help. Kaiser managers and executives are scapegoating caregivers for management's casual disregard of the well-being of Kaiser patients. It's a calculated move designed to silence caregivers. What kind of care will Kaiser members get if their care providers are too scared to report violations? These delays and denials of care can have tragic consequences. Some patients have committed suicide while facing long waits for therapy appointments.

The National Union of Healthcare Workers, which represents Dr. Wang, has filed a whistleblower complaint with the California Attorney General.

Three years ago, after Kaiser failed to act on its clinicians' documented claims, clinicians took their case to state's Department of Managed Health Care. The DMHC conducted its own investigation and in 2013 the agency not only affirmed the clinicians' allegations, but also fined Kaiser $4 million -- the second-largest fine in the DMHC's history -- for "systemic" violations of state laws governing timely access to care and issued a "Cease and Desist Order" that demanded that Kaiser stop breaking the law. For the next two years, Kaiser claimed to have fixed all the problems, but in February 2015, a second DMHC survey affirmed clinicians' allegations that Kaiser's violations persist. Meanwhile, the "nonprofit" HMO is enjoying record profits -- $1 billion in the first quarter of 2015 and more than $15 billion since 2010.