Laurie: It's pretty great having chefs as friends, but when they make house calls, well, that's off the charts. Last week, Daniel and Mirra, the cross-country traveling duo behind my favorite web series The Perennial Plate landed for their first visit to Martha's Vineyard.

A tad road weary, the couple has been traveling for months now, living out of their Prius and covering a wide array of stories about farmers, farms, food and sustainable agriculture. (Watch them at: ThePerrennialPlate.com.) Their food adventures have included hunting for frogs at the crack of dawn, noodling for catfish deep in Mississippi and foraging seaweed in the cold lakes of Maine. Okay, maybe a two-day respite on my farm wasn't exactly roughing it, even if they had to make dinner and do the dishes!

Daniel: I've never been to Martha's Vineyard, so when it worked out that our cross-country film shoot would have us very close to the famed island -- I checked in with Laurie David. She had been telling me about her organic garden since we first met and it was time to pay a visit. I figured it would be a little bit of a rest from our break neck trip around America. Little did I know she would put me to work. Actually, it's the great pleasure of any cook to go into a beautiful garden and create a menu from what is available. Inspiration is at its height. Laurie did have her influence though: She was very proud of the cabbages and kale, not so fond of Swiss chard or raw tomatoes (I know, totally crazy!), and didn't know much about cooking turnips. So it was decided (unbeknownst to her) that in those challenges would lie the night's meal.

Laurie: I have had a few meals with Daniel, but until now none have been cooked by him. So you can imagine my excitement at the prospect of what he might make from my garden. We set the ground rules early -- no trips to the store were allowed, ensuring a local meal at its best, since nothing is more local than your own backyard. The garden was a bit torn up from Hurricane Irene's visit the week before but surprisingly we still had tomatoes ripening on the vines, turnips popping out of the soil, bok choy galore and the miracle of all miracle plants -- and the one that keeps on giving all summer long -- kale. (Plant a pot of that baby and feed your family for months!)

Bossy boots me started to prod Daniel, "What are you going to make? How about the beets? What about this lettuce, amazing we still have lettuce in August, huh?!" Apparently chefs need some time to think, so I busied myself cutting a cabbage and stacking the large outer leaves for Mirra to feed to the goats. Pretty soon he had a basket full of bounty and we headed (ran) for the kitchen. 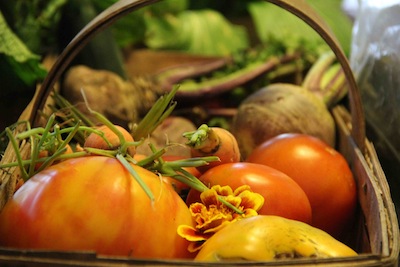 Daniel: Mirra (camera woman/girlfriend/co-conspirator) and I had just come from Maine where we had collected a couple different types of amazing seaweed. So I started off with a broth made with the kelp. I then used that same broth to braise the turnips (along with some onion, ginger, star anise and the stems of various herbs). It was beautifully aromatic and just slightly hinted at the taste of the sea. We served the soup with a bouquet of vegetables from the garden: sautéed eggplant and turnip greens, bok choy, and just picked baby carrots. Raw nasturtium leaves were the last addition to the bowl, floating delicately on the surface -- a tasty ode to Lilly pads. 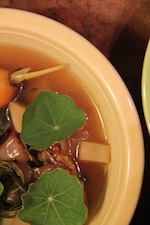 The soup course was followed by a kale and chard (because Laurie unknowingly proposed a challenge by vocalizing her distaste of chard) salad. This dish was a cross between a marinated chard salad I had at the Walrus and the Carpenter in Washington and a Kale Caesar from the Tartine Bread Cookbook. It's basically a creamy dressing using pecorino cheese and a little Martha's Vineyard honey, and topped with a beautiful fried egg (with a bright orange egg yolk, courtesy of Laurie's chickens). It was simple and to the point. In my opinion, delicious. 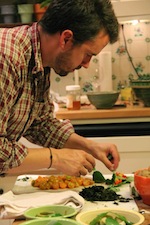 And on to the final course: Laurie and I had been talking a lot about the use of meat at restaurants and in our day-to-day lives. Both of us are trying to reduce the amount we eat, so I knew this meal should go all out vegetarian. It's easy with starters, but the main course can be a challenge without pasta or risotto. In comes the cabbage. A wonderfully versatile vegetable, of which I have started to grill. In this case I cut steak-sized wedges, and marinated them in good olive oil, balsamic and minced oregano. Let it sit till we were ready to eat and then charred each side. The sweet came through and it was almost everything a steak could have been.

With healthy food picked only moments before. Martha's Vineyard was a good place to cook. 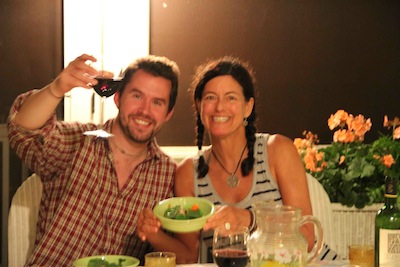 Laurie: Not to put too fine a point on it, but OMG was that a fantastic dinner! It was everything I had dreamed of... and more! Every drop devoured. Savored. Dessert was simple blueberries and strawberries frozen from earlier in the summer, a gorgeous sunset and a hilarious verbal game that required everyone to name one of their idiosyncrasies (no better way to get to know someone fast!). The game's highlight was Mirra who revealed that both she and her mother love to drink... pickle juice. No kidding. Play this game at your dinner tonight and try the kale salad and cabbage main course. I plan on perfecting both by the time The Perennial Plate team makes their next house call. 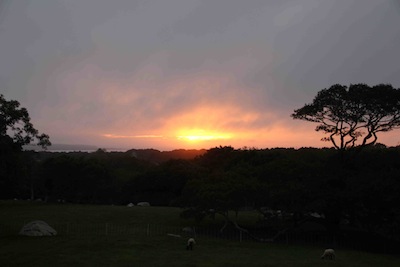 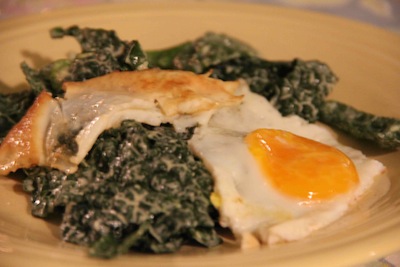 2 Bunches of Kale (enough for four).

Blend together all the ingredients except the olive oil and cheese. Then slowly add the olive oil to emulsify the sauce. Then blend in the cheese. If it is too thick, add a little lemon juice, vinegar or water. Serve with a fried egg. 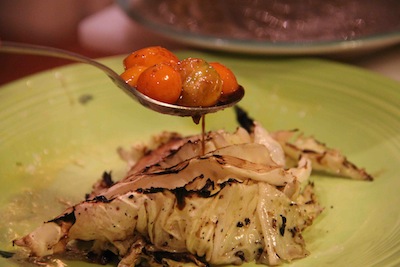 Cut the cabbage into 1 inch thick slices like pieces of pie, maintaining the core so the cabbage stays together. Slice for as many people as are eating. Marinade with the balsamic, oregano, salt, pepper and olive oil for at least an hour. With the grill on high, char each side of the cabbage, about a minute and a half on each side. Remove from the heat.

For the yogurt, mix together all the ingredients for the sauce except the olive oil, which you should whisk in at the end.

Blistered tomatoes -- these would be great raw too, but Laurie doesn't like raw tomatoes...
1 cup cherry tomatoes, sliced in half
1 teaspoon Balsamic vinegar
2 tablespoons olive oil
1 sprig of thyme
salt

Heat the olive oil until just before smoking, toss in the tomatoes for 1 minute, then add the thyme and vinegar. cook on high for another minute and then turn off the heat.

To serve, drizzle the yogurt over the cabbage, garnish with the tomatoes and maybe a few herbs -- I like the idea of dill flowers, I had picked them, but forgot to add them.