The startlingly obese beagle's owner surrendered him to the Chicago Animal Care and Control, and on Tuesday he was taken in by local animal rescue group One Tail At A Time. The portly pup shocked the rescue staff at his weigh-in, tipping the scale at 85 pounds. He was promptly given a new, diet-minded name. 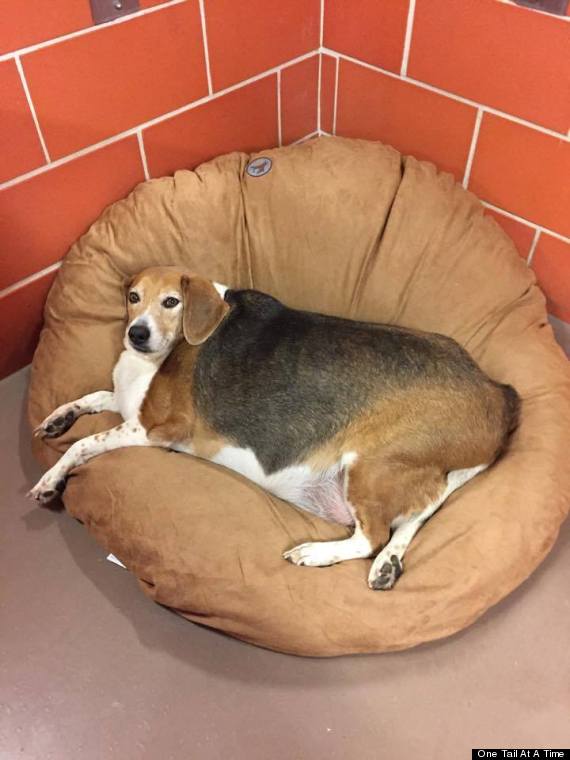 Kale Chips the beagle resting at the Chicago Animal Care and Control.

“Our jaws dropped when we saw that number. He’s the most overweight dog we’ve ever seen," Heather Owen, co-founder of One Tail, told The Huffington Post. “He literally had to be wheeled out in a wagon, he was so heavy."

Though healthy weights tends to vary by animal size, an adult male beagle should be around 22 - 25 pounds, putting Kale Chips on the extreme end of the spectrum, Owen said. While the dog, estimated to be 7 or 8 years old, will be tested to see if medical issues like hypothyroidism are contributing to the weight, Owen said lifestyle is the most likely cause.

"It’s our assumption that the owner wasn’t able to walk him or care for him," Owen told HuffPost. "[Kale Chips'] nails were really long and the owner certainly overfed him."

"One of the things we see a lot is that dogs who are obese tend to be the ones who get treats and snacks and people food in addition to their regular meals," Dr. Louise Murray, vice president of the animal hospital run by the American Society for the Prevention of Cruelty to Animals, told The Huffington Post. "People don't realize those are adding up. A dog biscuit sounds like it would be healthy, but a dog biscuit is actually a lot of calories. It's like when we eat potato chips out of the bag and don't realize how much we've consumed."

Murray said a good tip for healthy eating habits is to measure out how much you're going to feed your dog in both food and treats during the day. "Not only the number of treats and snacks, but also what they are," Murray said. "You can give your dog stuff your dog will be excited about, like vegetables." He added that owners should also monitor their dog's weight to see if the animal is putting on pounds, even if the dog eats a normal serving of food.

As far as exercise, Murray said owners should approach a pet's exercise program the same way they would a human's: If they've been sedentary, don't take them on a 2-mile jog the first day. 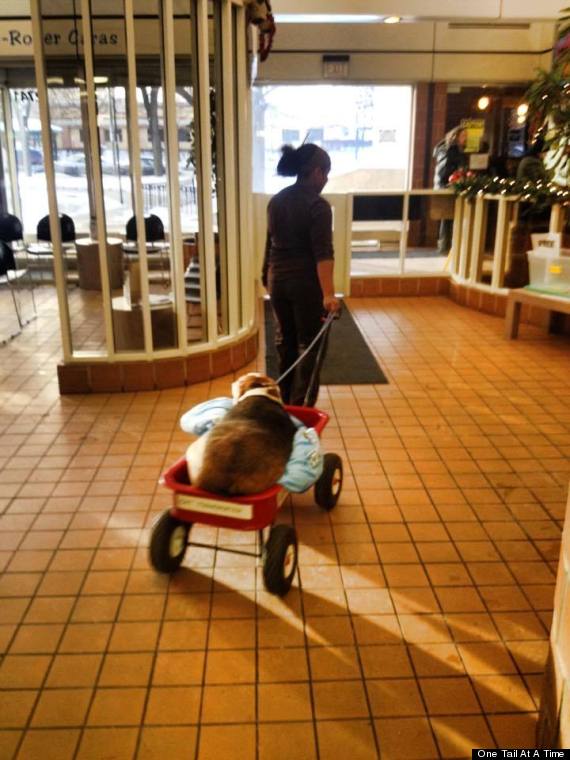 Kale Chips the beagle being towed in a wagon at the Chicago Animal Care and Control.

"Beagles are one of a very few breeds that will literally eat themselves to death," according to a blog by the National Beagle Club, which is part of the American Kennel Club. "Most dogs will self-regulate and only eat the amount of food they need to maintain the level of exercise they are getting. However, beagles have a tendency to eat all the food they can get."

Owen said dogs that come to their rescue are put on a slow weight-loss plan and do limited activity since their joints are overloaded by the excess weight.

Kale Chips, who will be placed in a foster home while he slims down, was originally adopted from Chicago Animal Care and Control in 2009. Owen said the owner who recently surrendered the dog is elderly.

“When we posted [the dog's] photo on Facebook, we got a lot of negative reactions," Owen said. "But we have to remember this was an elderly person, and they probably needed help. We want to find ways to help people care for their animals instead of admonishing them for when things don't work out."

"People often feed their animals to show love," Owen said, noting the dog's name originally started with a "K," but that the rescue dubbed him "Kale Chips" because "that's pretty much what his future looks like."

"I’m sure he would have liked to be just 'Chips,'" Owen said.

In the meantime, One Tail is requesting donations to offset the costs of Kale Chips' significant veterinary care. Individuals can also apply to foster the dog.

CORRECTION: An earlier version of this post mistakenly referred to Heather Owen's last name as West. Additionally, previous photo captions said incorrectly that the pictures of Kale Chips were taken at One Tail At A Time; they were, in fact, taken at Chicago Animal Care and Control. We also stated that the dog's owner had surrendered him to the animal rescue group, when the dog had actually been surrendered to Animal Care and Control and was later taken in by the rescue group.