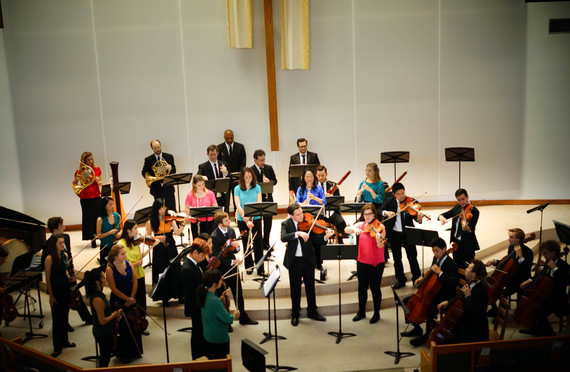 Founder Mitchell says it this way: "I decided to create Kaleidoscope for a multitude of reasons. Although there are many wonderful orchestras in Los Angeles, and some groups occasionally perform without a conductor, we would be the only professional orchestra that performs solely this way. I'm passionate about sharing a collective vision in much the same way chamber music creates a more intimate experience for the musicians involved and presenting concerts at the highest level possible. I also want us to explore less traditional ways to reach out to audiences that help the concert experience be more personal and meaningful to all people."

Kaleidoscope's season launched last weekend at two local churches in Pasadena and Santa Monica. I caught the second performance last Sunday at the latter city's First Presbyterian Church, a music-friendly space known to audiences for its live acoustics and residency of Jacaranda Music. Featured were two perennial favorites by Copland and Beethoven, not novel choices but surefire crowd pleasers. 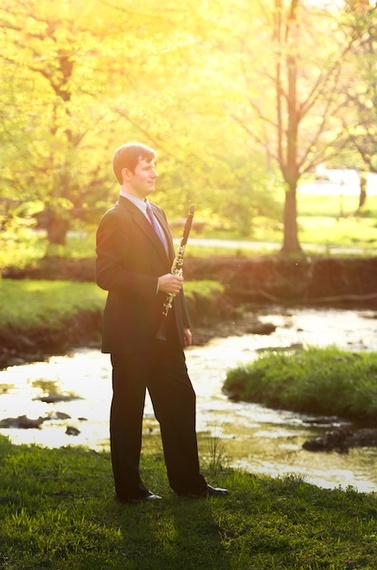 Copland's beloved Appalachian Spring is an atmospheric 1945 score of rural Americana based on an earlier ballet. Characterful solos by woods and brass, especially from Mitchell's clarinet, colored quiet evocations of the nation's expansive heartland, suggested by the work's frequent open fourths and fifths and folk tunes of the early pioneers like the now ubiquitously heard "Simple Gifts."

Even more impressive was a tour de force performance of Beethoven's Seventh Symphony, which Richard Wagner famously called the "apotheosis of the dance." It's a rhythmic, tuneful joyride from the first movement's charmed awakenings to the last one's frenzied bacchanal. The 35-member ensemble's snap-crackle performance of it brought the audience to its feet at the conclusion.

The gentleness of the Copland and the rambunctiousness of the Beethoven showcased two sides of an already remarkable group cohesion within the ranks of an orchestra whose members range in age from mostly younger adults to a few seasoned pros, and whose permanent membership is still a work in progress, according to Mitchell.

Successful music ensembles of all sizes must conform as one unit to the ever-shifting tempos, dynamics, and rhythms of great works of music. To make that happen, the conductor's role is often likened to that of an autocrat. Kaleidoscope's approach attempts to achieve equally precise results but in a more democratic way; leadership comes from within the ranks. Players engage in give-and-take discussions at rehearsals, but when it's performance time they take their cues from their section leaders or, if playing as a full ensemble, from the concertmaster.

Notable discipline in this performance was characterized by consistent bowing patterns in the strings. Also notable was that leadership positions shifted between the two works. Concertmaster and section leaders in the Copland became last chair players in the Beethoven. That switch reinforces a more democratic, less autocratic approach to Kaleidoscope's music making.

As go democratic societies, perhaps also will go this new Kaleidoscope Chamber Orchestra's foray into an uncertain but hopeful collective future. We wish them well in their new endeavor.

Series 3 (March 6 & 7) "Tales and Tribulations" will focus on tales of childhood through Ravel's Mother Goose Suite, Prokofiev's Peter and the Wolf and Tchaikovsky's Romeo and Juliet.

Tickets are $25 for general admission, $10 college students and senior citizens, and no charge for ages 17 and younger. For more details on artists and ticket information, see: www.kco.la