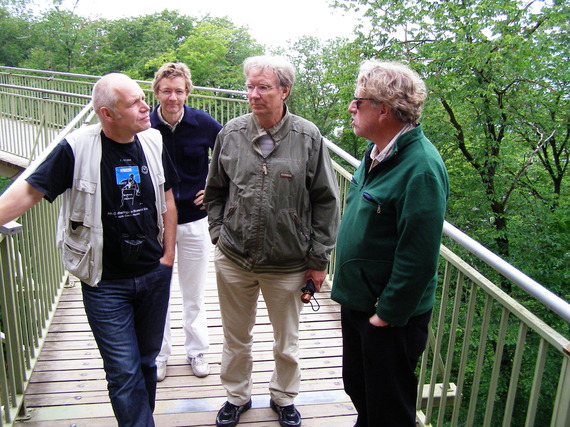 Biosemiotics pioneer Kalevi Kull has sent the following letter to me in response to one of the organizers of the upcoming Royal Society public meeting on paradigm shift attempting to censor my coverage of the event.

Kalevi Kull plans to attend the November gathering in London.

Well, I really interpret the letter you refer to in your article ["Censorpship & Upcoming Royal Society Evo Meeting"] as evidence that this IS a paradigm shift. Because it focuses not on the biological theory itself, but on social matters in academia. And this is a serious hint. Because if this kind of deep change happens, then very many scientists face a problem of how to survive this change because the new dominant model they would like to accept results in many of their previous writings losing much of their value. Nobody wants to belong to the party of losers. One of the best strategies in such a case is evidently an interpretation of the change as a gradual accumulation of knowledge while their work has always been at the cutting edge.


[Following is the censorship email Kull refers to above -- it was not written by Denis Noble:

"Could I request that you stop referring to the forthcoming RS-BA meeting ("New Trends in Evolutionary Biology: Biological, Philosophical and Social Science Perspectives"), and to the extended evolutionary synthesis, more generally, as in some way advocating a "paradigm shift". Such language is both misleading (the vast majority of scientists working towards an extended synthesis do not seek revolutionary change in neo-Darwinism) and counterproductive (such talk undermines calm scientific discussion by creating an unnecessarily emotive and antagonistic atmosphere). I view the Kuhnian model as superseded long ago: the data suggests that sciences rarely if ever change through "revolutions". Lakatos' framework of "research programmes" offers a more up-to-date, accurate and useful conceptualization of (gradual and progressive) scientific change. The extended evolutionary synthesis is best regarded as an alternative research programme, entirely complementary to orthodox evolutionary biology. Talk of "paradigm shift" gives the false impression that the differences amongst evolutionary biologists are far more extreme than they actually are. . . ."]

[Kalevi Kull's correspondence continues:] Is this a radical change in biology what is going on now? The contrast is quite clear, if we look at how evolutionary innovation is described. Either innovation begins from a new mutation, followed by newly behaving phenotype, which is amplified by natural selection (this is what the neo-Darwinian model suggests), or innovation begins from a change of function (with habitat choice, or resource choice, etc.) first stabilised by epigenetic or ecological inheritance and followed by fixation due to mutational noise (which is what the new model states, let us call it the post-Darwinan model).

The details of this contrast are described, for instance, in my work "Adaptive Evolution without Natural Selection" published in the Linnean Society journal. . . but there are many scholars who share this model. That paper provides a row of references. Isn't it a deep contrast, and a possible move from one to another, a radical change of the major model of evolution?

However, if indeed one knows all the dramatic history of the theory of evolution. . .
Here's a sketch. Estonia has been described as a country with one of the richest political experiences. We also see this in our history of Darwinism.

Around the turn of the century, before WWI, Tartu University was a Russian-language university, and Darwinism was soon popularised as supporting early socialist ideas. Soon after, together with advances in genetics, evolutionary theory was interpreted as a basis for eugenics (also used in this way by national socialists in Germany before WWII).

Then Estonia was annexed by Russia, and after the WWII for more than a decade it meant the influence of vulgar Darwinism (also called 'creative Darwinism' at that time), as propagated by Lysenko (yes, he also praised Darwin, he just did not like genetics).

In the 1970s and 80s, all students in the Soviet Union had to learn how Darwinism goes hand in hand with Marxism, meaning a good connection with the 'synthetic theory of evolution', which was a synonym for neo-Darwinism. . .

Simultaneously, a radical non-Darwinism was also developing within certain circles of Soviet biologists, who took it from the theory of Nomogenesis of Lev Berg and his follower Alexander Lyubischev. After the collapse of the Soviet Union, an outgrowth of neo-Darwinism called sociobiology became a dominant view for many, particularly among zoologists. . .

If one has read all this and been able to understand why all these scholars had the views they had, it is hardly possible to describe this history as gradual improvement of a model, continuous extension of a synthesis. There have rather been different paradigms existing and developing in parallel. Most of the time just one of them was strongly dominant over the other. And since evolutionary theory has almost always been tied to some ideological battles, its changes were not limited by scientific discoveries.

Nevertheless, we have good friends and colleagues whose views about evolution we do not share. But should we therefore be less strict in our formulations about our views? No, that would mean giving up our understanding. Good teachers wouldn't do so.

Science, deeply speaking, is the mutual help in understanding. We should help each other as friends; nobody is understanding everything. Keeping this in mind, the best way to make our thoughts clear is to use formulations that do not hide meaning. A better understanding is not always an extension of the earlier model, sometimes it is an alternative.

In other words -- summarizing -- claiming that what is going on is just an ongoing extension of Darwinism would be equivalent to saying that Einsteinian physics is just an extended Newtonianism. Why not, one may describe it so. However, the Einsteinian change became a classic example of a paradigm shift, for Kuhn. . . .