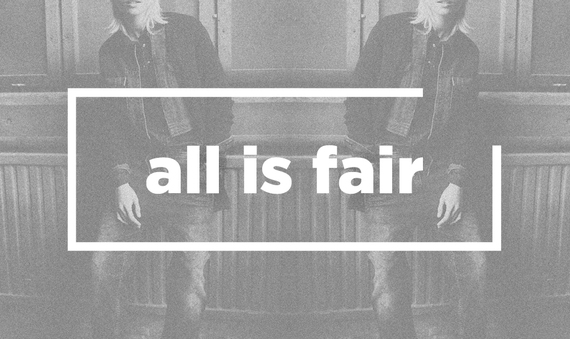 At nineteen I started wearing boy briefs. Few companies carried this product for women. With limited options, I went to Target. I was pretty small in stature so I got my undies of choice in the little boys' section. I always thought of them as cute, comfy and effortless. I am not sure if it was the style, the cut or comfort, but something about wearing briefs made for boys always made me feel sexy.

My boyfriend did not share the same sentiment. He described them as, "creepy," which is never what you want to hear about your underwear. I never understood what exactly gave him the creeps. Was it because they were little boys' garments or because they weren't dainty, white and lacy?

This panty problem inspired a lingerie obsession. I started wearing a variety of undergarments to see how they made me feel. I tried thongs, boxer briefs, pink lace frills, liquid tight red corsets, granny panties, push up bras, nighties as dresses or if I was low on cash I would wear nothing at all.

Every garment made me feel like another person. Not all of them were comfortable. Panty after panty, I kept wondering: What do my choices in lingerie say about me and how I see myself? If I like comfortable briefs does that make me unfeminine?

Do the clothes really make the person?

I was reminded of my lingerie identity experiment after reading an article by Rose Wednesday. Rose, writer and blogger for lingerieaddict.com, wrote about how lingerie helps her with her gender dysphoria.

Her words serve as a guide for the genderqueer, gender fluid, bi-gender, or to those who don't identify as either male or female.

Rose claims that lingerie helps her see and recognize aspects of herself. She explains how on "girl days" she loves to wear push-up bras. (Rose's idea of being "girly" is Marie Antoinette.) But then the next day Rose may wake up and wonder why she has breasts at all.

In her article, Rose listed various brands of sports bras that could be used as breast binders and shared a few tutorials so readers could make their own. She also shared Underworks and T-Kingdom sites offering binders. But all of the recommended products looked very medical; all function and no fashion. I was surprised to discover a lack of lingerie designed specifically for the LGBTQ community. Many of the garments Rose suggested were makeshift alternatives, converting lingerie designed to make straight people feel comfortable or sexy. Where were the LGBTQ options?

I did a little research and found Chyrstalis, a company for customers transitioning from male to female. Their bra band size was incredibly limited, only going up to a size 38. The bras were about $250 a pop. As a woman used to paying around $50.00 this seemed outrageous.

It is 2015 - thirty-six States have legalized same-sex marriage. Transgender actors are getting more recognized roles, instead of being highlighted as the dead tranny hooker on Law and Order. Straight marriages are looking to gay marriages to figure out how to live happily ever after. Model and activist, Geena Rocero, told the world in a Ted Talk last year that she was transgender. Matt Duron, a manly man and police officer wrote an article for The Atlantic in 2013 titled, "My Son Wears Dresses; Get Over It."

There has been so much progress, so much change. So where are all the LGBTQ lingerie shops?

I sat down with Peregrine Honig at at YJs Coffee Shop over the holidays to find some answers. Many people know Honig as the runner-up of the Bravo show, Work of Art. In Kansas City, Missouri, Honig is more than a TV personality. She is an artist, entrepreneur and social innovator.

Honig and her business partner Danielle Meister have owned Birdies Panties, a lingerie shop, for 13 years. They know the business.

"For some customers it is like going through a second puberty."Peregrine explained. That is why Honig wants a shop specifically for the LGBTQ community.

Creating and selling transgender lingerie has its challenges. Every customer's body is different. Aesthetic interests and ideas of what is sexy vary greatly. The typical aesthetic and standardized design of companies like Victoria's Secret won't work. Not everyone wants to be an angel.

Honig is passionate and believes they deserve garments that fit them properly. To fulfill that need, all garments at All is Fair will be hand-made and individually tailored.

Miranda Treas, a senior at Kansas University, will be one of the designers at All is Fair. She has been creating underpinnings at Birdies Panties for more than three years. While going to school full-time and designing her own brand, she has also maintained a part-time job at Contour MD. Contour MD is a company that creates post surgical compression garments.

Treas is most excited to create binders. Her research discovered that many people would use Ace bandage wraps to flatten their chests. While visiting chat rooms, Treas learned that in some cases people had broken their ribs because they had wrapped themselves up too tightly or worn a homemade garment too long.

Honig will hand paint the binders she sells. "These pieces will be about the celebration of transformation. It is about helping people be who they really are."

As far as art is concerned: Honig's paintings and stunning illustrations are empowering and vulnerable. I can't imagine her work on the binders will be any different.

Missouri may have extreme conservatives like Todd Akin, who claimed the female body had some magical power to avoid conception while being raped, but Missouri also has Peregrine Honig.

Times are a changing. And panties are too.