Kanye West stopped by "Late Night With Jimmy Fallon" for a sort of surprise performance of "Bound 2," on Monday night, bringing yet another aesthetic with him.

West, who was dressed in denim with some open leather chaps that had "Earth, Wind & Fire" written on them, was joined by Charlie Wilson for "Bound 2." The "Yeezus" track sees the rapper returning to the sound of albums past, affecting a "College Dropout" vibe. (Notable lyrics: "What you doing in the club on a Thursday? / She say she only here for her girl birthday / They ordered champagne but still look thirsty.")

Wilson and West were backed by The Roots, Fallon's house band. 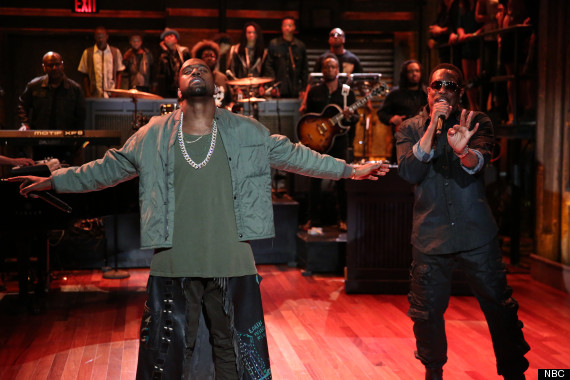 The rapper splits his time between New York, Los Angeles and wherever he may be booked for a performance, but was in town this week to check out New York Fashion Week. West was spotted sitting front row at shows for Alexander Wang, Louise Goldin and Hood by Air, among others.