Kanye West debuted "Yeezus," his sixth studio album, to a crowd of critics, fans and celebrities on Monday night at an event equal parts listening party and public art exhibition.

The festivities took place at Manhattan's Milk Studios, but rather than following the countless PR and fashion events that Milk has hosted before, West instead chose the Meatpacking District building's loading dock. Attendees were let in one by one, a slow process that would have led one to believe that only a select few were being given the privilege of the record. That was not the case: The venue was open to the street, so anyone within earshot could hear the album which had hitherto been shrouded in secrecy, and anyone within eyesight could see the basic video imagery that went along with the audio.

That's in keeping with West's public -- and global -- debut of "New Slaves," but there's more to the theme than a simple stunt. Though the likes of Jay-Z, Beyonce, Busta Rhymes, Theophilus London, Timbaland and Q-Tip stopped by, West seemed most pleased to see that his work had the potential to be heard by passersby. Long after Jay-Z and Beyonce had stopped their all-out, hands-in-the-air dance-along to the vibrant album, West became excited when a city bus drove by and grabbed the microphone to remark on the fact that the event was "out here in the middle of New York City blasting music and nobody is shutting us down."

West also put one matter of confusion to rest: "I want to explain something about the album title. Simply put, 'West' was my slave name and 'Yeezus' is my god name."

By this point, near the end of the second spin of the album, West was decidedly free-spirited, dancing and shaking hands with fans. It was easily his happiest public appearance in months, a period during which bloggers noted West's perma-scowl. At the start of the night, West seemed more antsy, rattling off a series of somewhat curious justifications, saying he didn't release singles because he didn't enjoy seeing his work on YouTube next to "related artists" ("When you buy a Louis-Vuitton bag..."), reminding fans that his father was in the Black Panthers and letting the crowd know that didn't hear Joy Division's music when he was growing up. It made sense at the time, but it was certainly a stream-of-consciousness diatribe. 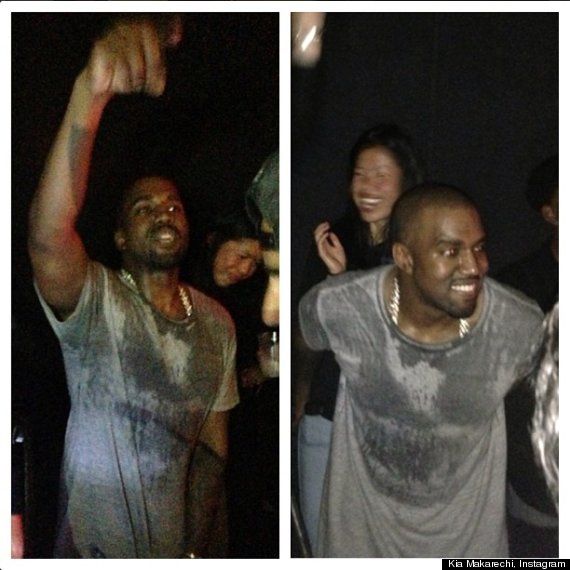 West revealed that Daft Punk worked on "three or four" songs on the album (including "Black Skinhead," "On Site" and "I Am a God"). Other details: Chief Keef, King Louie, Kid Cudi and Justin Vernon of Bon Iver appear on the record, C-Murder lines get sampled, as does Billy Holiday. Keef and Vernon actually appear on the same song, "Can't Handle My Liquor," which West revealed was added and rounded out the album to 10 tracks. West confirmed that Rick Rubin was brought in to help finish the album, a development West said was a blessing and an inspirational experience ("Everything I've been doing, from the 'New Slaves' video to the album with no artwork, I've been thinking, 'What would Rick Rubin do'?").

"Yeezus" is out June 18 on Def Jam. There are no pre-release singles or pre-orders.