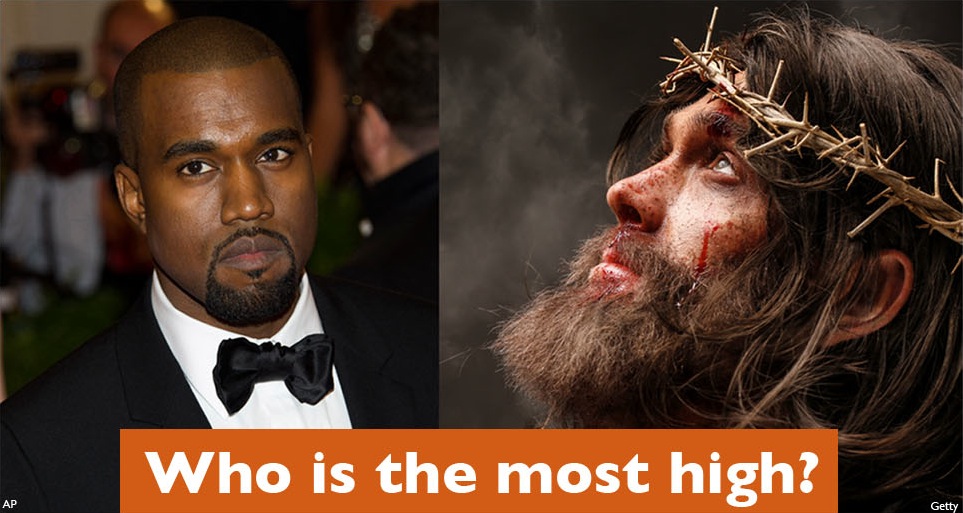 Kanye West has used Jesus Christ in his art since "Jesus Walks." Never, though, has West's embrace of the Son of God been as fervent as his last album, "Yeezus," which title is a portmanteau of West's nickname (Yeezy) and Jesus. The album also features a direct Kanye-Jesus comparison in the song "I Am A God": “I know he the most high / But I am a close high."

With Kanye bringing a Jesus lookalike on stage during his current tour, The Huffington Post decided now is a good time to compare the relative places of Kanye and Jesus in the popular zeitgeist.

To do this, we analyzed a year's worth of Twitter data (from Oct. 21, 2012 to Oct. 20, 2013) via the third-party service Topsy. When comparing Jesus and Kanye on Twitter, the first question is what terms should we use for the comparison?

There are a lot terms Twitter users use to reference Jesus: there's the broad "Jesus," which includes other people named Jesus, the more specific "Jesus Christ" and foreign language versions -- Jesucristo in Spanish, gesù cristo in Italian. Some users also tag the name, resulting in mentions for @Jesus.

Since Jesus doesn't have a genuine Twitter account, and Kanye has a habit of deleting all of his tweets, using @ mentions didn't seem that promising or fair. Looking to minimize instances of other people named Jesus and Kanye, we decided to start our search comparing "Kanye West" with "Jesus Christ":

According to the data, in the last year worldwide, looking at only original Tweets (no retweets, no replies), “Jesus Christ” had 3,936,585 mentions, while “Kanye West” had 4,541,349 mentions. Pretty impressive for the 36-year-old rapper.

So, using "Kanye West" vs "Jesus Christ," their Twitter mentions are pretty close.

Only looking at the United States offers a clearer picture. Although there are some residents in the U.S. who speak foreign languages, Jesus Christ is generally used as the identifier. Here, again using "Kanye West" vs "Jesus Christ," Kanye had slightly more mentions overall, 2,429,931 to 2,224,895, but they were about equal when the day-to-day totals received consideration. Breaking it down state-by-state, some states tweeted more about Jesus (orange states) while other states tweeted more about Kanye (green states). 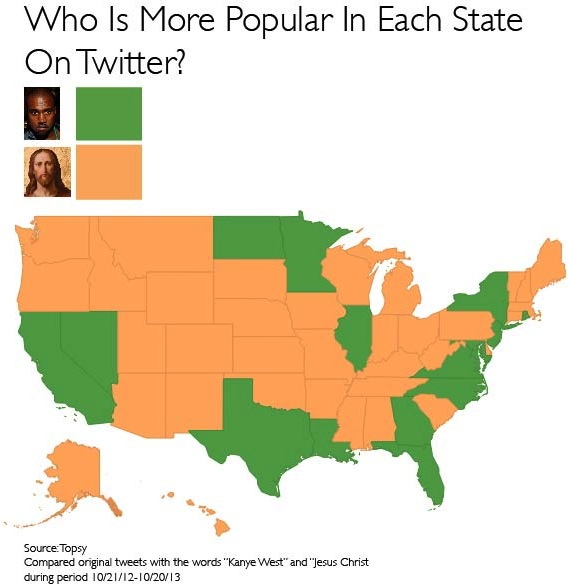 When did users tweet the most about Jesus and Kanye?

How much smaller? We looked at a sample of the hundred most recent tweets for "Jesus Christ" on Twitter using the Twitter search and found that 73 percent of uses of "Jesus Christ" were idiomatic, leaving 27 percent literal. This search occurred during a tense soccer match (lots of "Jesus Christ" exclamations) and is too small of a sample to offer definitive conclusions, but it signals that the idiomatic "Jesus Christ" is accounting for a significant portion of the examined mentions.

So what happens if you compare "Jesus" vs "Kanye"? Jesus had significantly more tweets: Kanye had 10,412,097 tweets compared to Jesus's 51,724,902 tweets. Looking again at a sample of the hundred latest tweets to gauge what's going on, we see the following breakdown:

This sample is again too small to prove definitive, but even if only 25 percent of those tweets that contain the word Jesus refer to the religious figure, "Jesus" would still have more literal tweets than "Kanye," and the proportion of tweets referring to Jesus appears to be much higher than that. We also haven't accounted for different names for Jesus in languages other than English. When you break it down by region, mentions of "Jesus" are more popular than "Kanye" pretty much everywhere.

So, it looks like Jesus is "the most high" on Twitter -- except for Justin Bieber, who trumps Jesus in popularity with 68,257,710 tweets for the search term "Bieber" during the same period.