UPDATE 2:
Kanye apologized on his blog to Taylor. "I'm in the wrong for going on stage and taking away from her moment," he wrote in part. "Beyonce's video was the best of this decade... I will apologize to Taylor."

UPDATE:
When Beyonce won Video of the Year, she called Taylor out to the stage to give her interrupted speech instead (scroll all the way down to watch that touching moment, and watch Beyonce's live performance here).

PREVIOUSLY:
Taylor Swift got a surprise when she accepted the award for Best Female Video at Sunday night's MTV Video Music Awards.

After Swift, looking shocked, beat out Lady Gaga, Katy Perry, Kelly Clarkson, Pink and Beyonce for the honor, she took the stage and accepted the award. As she was thanking MTV, Kanye West ran up on stage, took her microphone, and said Beyonce had been robbed for her "Single Ladies" video.

"Beyonce had one of the best videos of all time!"

Swift, 19, stood silently holding her trophy, cameras cut to Beyonce looking stunned in the crowd, and MTV then cut to break. 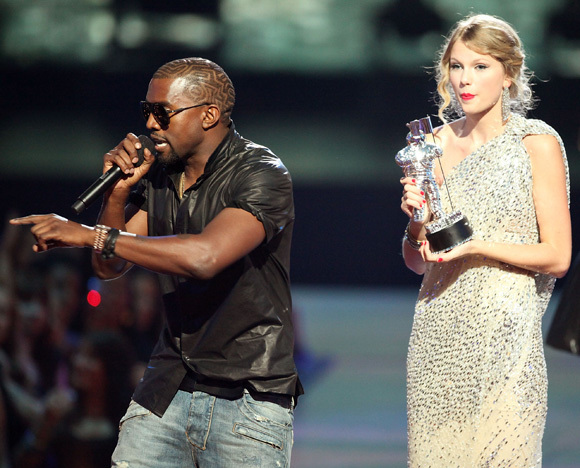