We're not sure what it's like to be a guy wearing leather pants, but we're pretty sure they don't just fall down on their own.

This latest date night photo in the Kanye West/Kim Kardashian show-mance shows Kanye's wardrobe malfunction as the rapper drops his pants and flashes some thigh.

After stepping out of a car after dinner with Kim K., Kanye seemed to be having some trouble keeping his Balenciaga pants from falling down, exposing not only his briefs, but bare skin. The rapper noticed and pulled his leather trousers back up, but not quick enough for the paparazzi to catch a cheeky pic.

Kim, herself decked out in a Givenchy jacket, Louboutins and a $4,000 Hermes clutch, didn't seem to even notice as Kanye adjusted himself. The pair dined at N62 restaurant in New York earlier in the evening before heading back to Kanye's apartment when the pants-dropping mishap took place.

Whether Kim and Kanye's romance is "real" or not, the pair has definitely mastered the art of teasing the press about it. Remember Kim's message to the press with her K.W. initial earrings? Most of their reported moves are well coordinated and planned out -- whether they're holding hands or wearing matching outfits.

So we have to ask: what's going on with Kanye dropping trou? Was it intentional, or did he really just lose control of his pants?

Either way, this looks a little suspicious to us. He is wearing a belt, after all. So we have to wonder what was going on in that car.

UPDATE: Kim Kardashian defended the incident to E! Online, saying, "He was getting out of the car and his belt got pulled by this hook on the car door and he was trying to pull it up quick and his belt was really heavy ... It was a wardrobe malfunction, but it wasn't anything intentional. It was not scandalous." 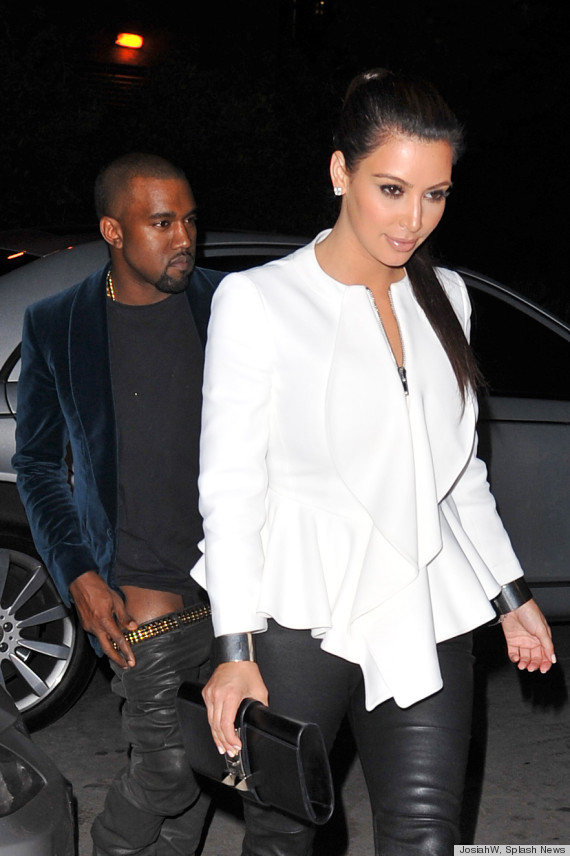 Check out the gallery below to see more wardrobe malfunctions!