Kara Walker's sugar sphinx descended upon Brooklyn last month, bringing well over 35 tons of sweetness to the cavernous darkness of the old Domino Sugar Factory. It's the same abandoned, 11-acre refinery that's set for total demolition later this year, a tear-down that will pave the way for condos, leaving behind one lone red brick building as memory of the 19th century fixture.

Walker, via the public art patron Creative Time, has managed to give the structure a summer send-off to remember. She packed in 15 resin-and-sugar statues -- tiny characters with masterfully carved characteristics, that harken back to bygone eras, from Egyptian labor practices to medieval design to the 16th century Caribbean sugar trade to early African American history. Then, of course, there's the sphinx. A massive, naked woman, perched in that familiar mythical stance, with a face reminiscent of the Mammie archetype. 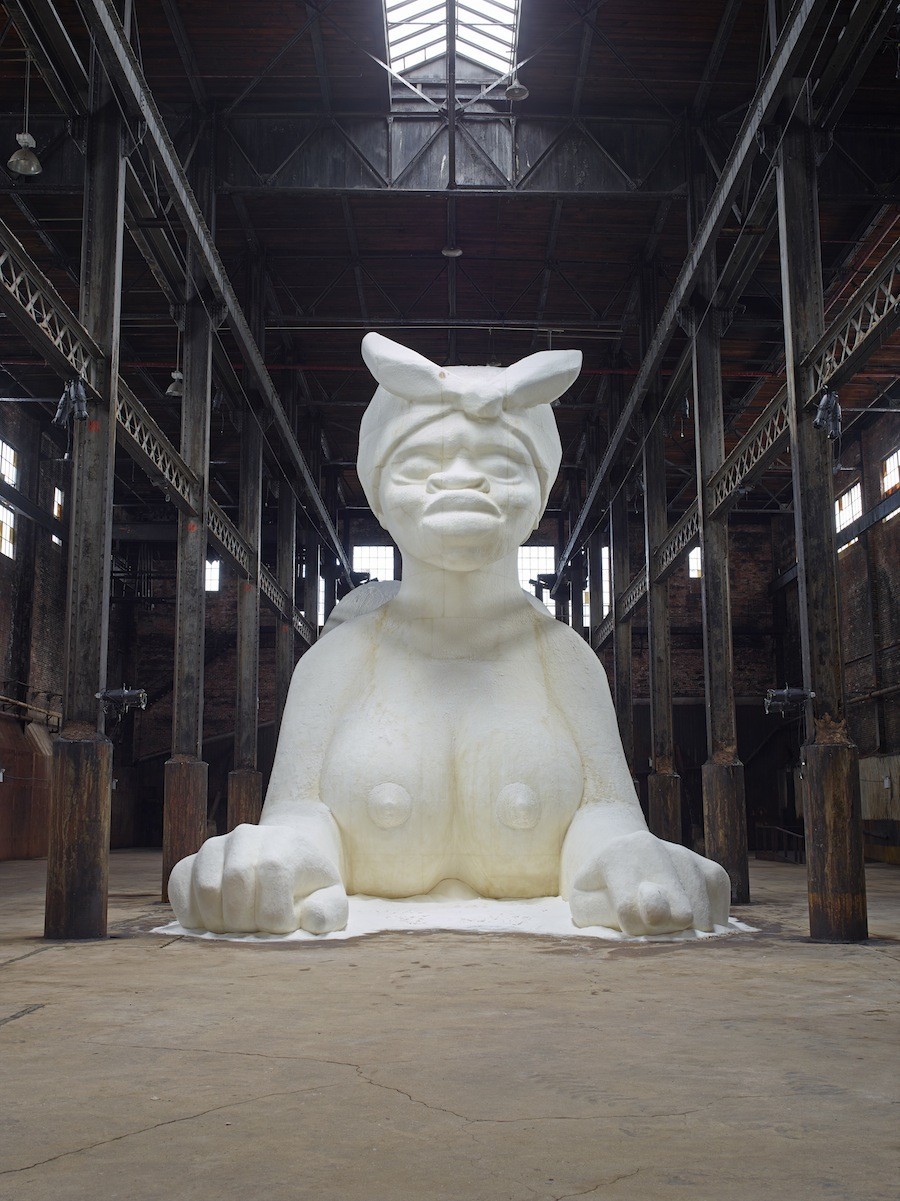 There's a host of hidden imagery stashed in and around the provocative body. Read any review of "A Subtlety, or the Marvelous Sugar Baby An Homage to the unpaid and overworked Artisans who have refined our Sweet tastes from the cane fields to the Kitchens of the New World on the Occasion of the demolition of the Domino Sugar Refining Plant," and you'll see nods to Saartjie "Sarah" Bartman, the Khoi woman who toured the world as the Hottentot Venus, or the "figa," a bit of Brazilian decor seen in jewelry and homes.

Much of it points back to America's sugar slavery, and the decades of consumption that came before and after. The images contradict each other, pointing to vintage edible sugar sculptures (aka "subtleties) of high society on the one hand, and the stereotypes we associate with "black memorabilia" and racist collectables on the other. "Confronting the viewer with the contradictory desires and interpretations that s/he cannot bear to acknowledge, my work reveals images that I too am shocked to encounter in dark alleys of my imagination," Walker proclaimed. "You may be seduced, you may be outraged. Therein lay the unspeakable trappings of our visual codes."

The installation is, essentially, layer after layer of historical references, pleading visitors to peel back those layers, lest they mistake the wildly popular art attraction (the opening alone saw 4,000 people) for this season's "Rain Room." While Walker has imagined a sensually appealing construction -- it's a visual feast to say the least, and even the air tastes like sugar -- it's on the viewers' shoulders to educate themselves on what the sphinx's finger gesture means or what the basket-toting children signify. It's not enough to traipse around the ruin relic mouth agape, Walker's sculptures need you to dig deeper. 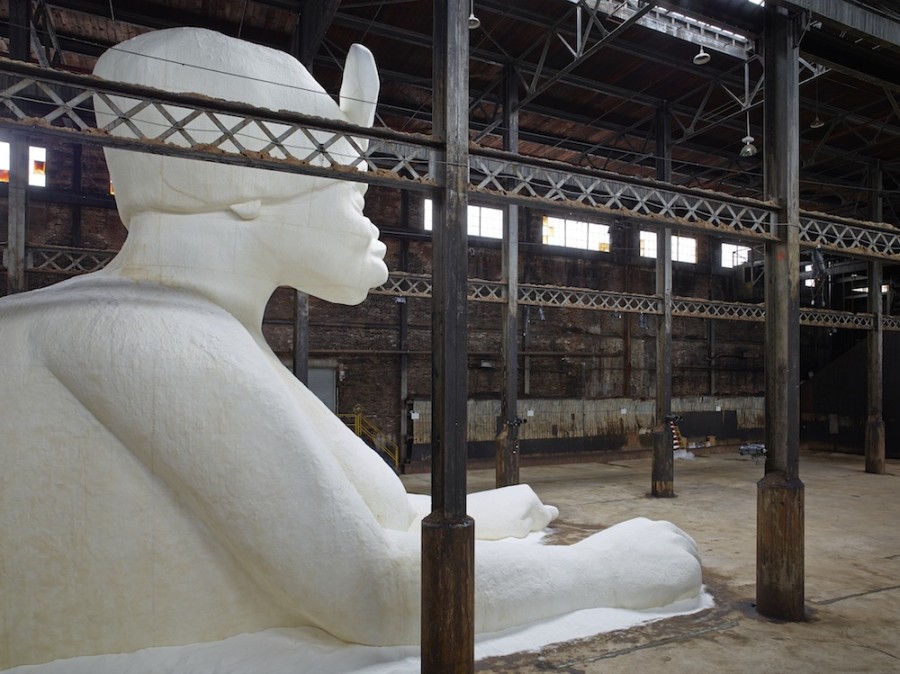 And dig deeper the Domino adventurers have. By that, I mean they find their way to the Creative Time badge-wearing volunteers tasked with being docents, and ask away, about the lack of rats, the fate of the smokestacks and the internal organs of the glistening giant. I have been one of those volunteers and, for the record, I'd like to dispel some of the folklore clouding our perception of Walker's complex homage to race and exploitation. So here's an attempt at answering the questions I've come across in the presence of the sphinx.

The Sphinx is not pure sugar. And neither are the figurines... most of them, at least.

Though we wish the crystalline giant was pure sugar, like a giant piece of candy lording over the complex, it's simply not the case. The sphinx is made of 330 foam blocks, carved to fit perfectly together by Digital Atelier and a group of sculptors on site. The body, once puzzled in place, was then covered with 35 tons of white sugar. The result is a 35-foot high and 75-foot long woman, wearing the kerchief of a Mammie character, a black woman of the American South who looked after white children. It took two months and 20 people to do the job.

"What we're seeing, for lack of a better term, is the head of a woman who has very African, black features," Walker explained to NPR. "She sits somewhere in between the kind of mammy figure of old and something a little bit more recognizable -- recognizably human. ... [She has] very full lips; high cheekbones; eyes that have no eyes, [that] seem to be either looking out or closed; and a kerchief on her head. She's positioned with her arms flat out across the ground and large breasts that are staring at you."

And the colossus has yet another reference hidden inside. Walker was partially inspired by a 1920s monument approved by Senate to memorialize "the faithful slave mammies of the South." Not surprisingly, the proposal incited anger and protests among African Americans and the monument never came to be. The accompanying figurines at the Domino Factory are another story, though.

The 15 "processional figures" are like the carvings you'd see in the hallways leading to Egyptian temples. At five-feet tall, the children are modeled after small figurines Walker found on Amazon.com, bits of cultural memorabilia that seem both controversial and bittersweet today. A few of them are solid sweet, built from a mixture of sugar, corn-syrup and water, and cooked at 300 degrees Fahrenheit, while the rest are resin coated in molasses and sugar. They were all built from molds and they're meant to make you think about the child labor balled up in American industry.

As for the sugar on the columns, in the corners and between the walls, that's decades of old sweets. Left over from when the factory churned out mountains of white gold. It's not decoration. And it reminds us that this place is not a playground. Sure, your children will learn a lot basking in the glory of the sphinx, if you so choose to explain it to them. (And it's been wonderful to hear thoughtful parents explain the female anatomy to kids who genuinely seem interested in learning what the word "labia" means.) But the refinery is a tomb, of sorts, and you shouldn't expect to let everyone run wild. Warning: Scooters are not allowed. 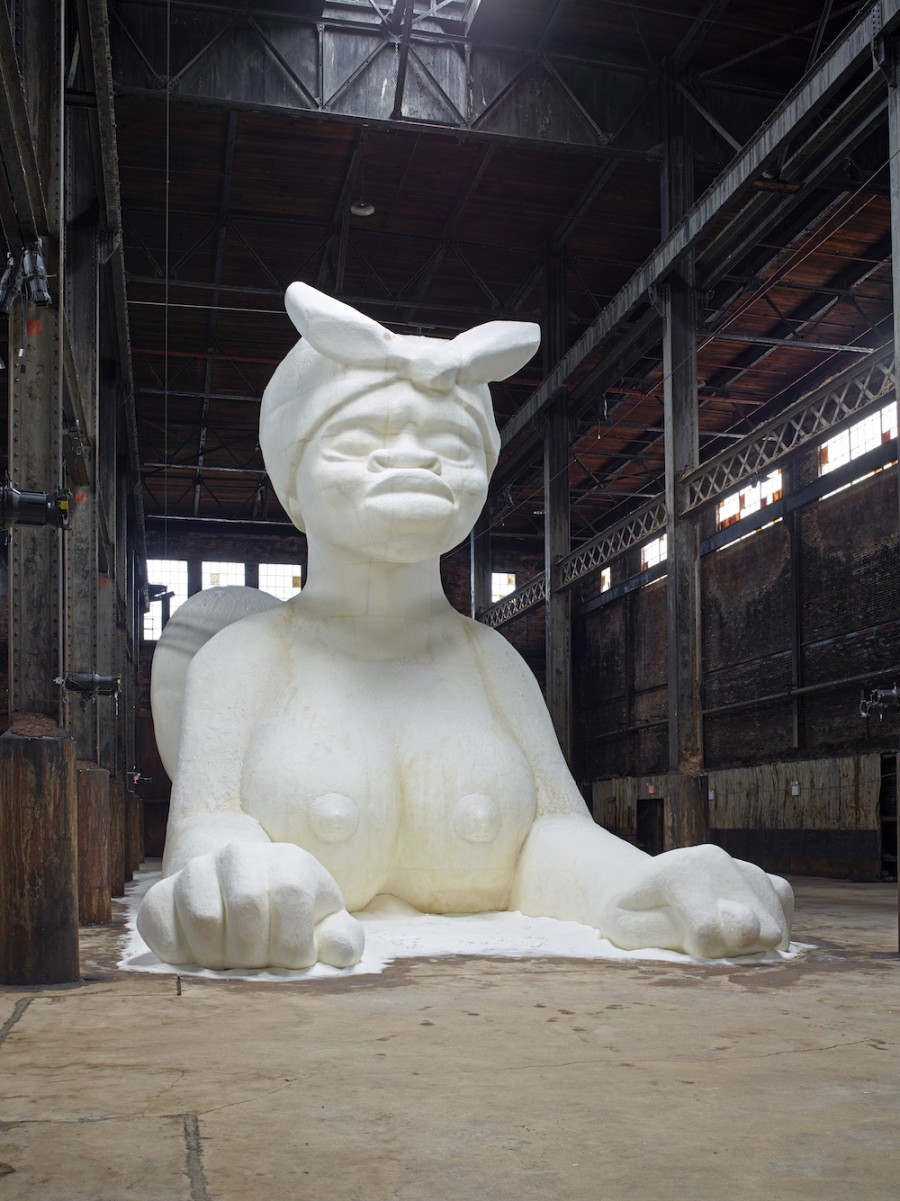 There's a simple explanation for why there are not pests.

This by far the most frequently asked question on the Domino property. "Why aren't there [insert pest here: rats, mice, ants, bees] attacking the sculptures. People seem to lavish the creativity of the quandary, and up until recently, I'd heard only that rats don't really like sugar. Cue your friendly neighborhood Arts blog.

"How Are They Keeping Rats Off Kara Walker's Sugar Sculptures?" Hyperallergic's Claire Voon posed. And the she answered. Turns out, the sculptures are left uncovered at night and the Creative Time team did not spray insecticides. Two Trees, the company destined to take the building down, did lay poison and traps last year. CT continued to lay traps during the sculpting process, but claims they really haven't seen any scurrying rodents. A couple of ant colonies (that seem to have vacated the premises now) and a few pigeons later, exterminators hypothesized that the affluent neighborhood just doesn't have a pest problem.

Finally, I didn't know how molasses is made, but I do now. Just ask me.

All in all, there are no placards at the Domino Factory, only a vague introductory bulletin, and it makes you wonder whether Walker had more in mind to connect the audience to her web of history, or if the simplicity and the toned-down shock of racial issues was just a more palatable package for Williamsburg. Creative Time must certainly be relishing the exposure of the public artwork, but the more I visit, the more questions I hear.

It's a lot of responsibility for volunteers armed with only an exhibition brief. And there's no denying the more information we have, the more illuminating and haunting Walker's intricate works become -- preferably when that information comes from the woman, Kara Walker, who's so poised to retell history through provocative work. It will be interesting to see how the throngs adapt to the rumors and myths circulating... and maybe that was Walker's intention. Walker's cutouts didn't need explanation, but then again, those two-dimensional forms told a story of slavery many of us are familiar with.

Questions beget questions, as someone somewhere said. And if "A Subtlety" is about contradictions and the ways in which we negotiate around them, perhaps we never needed placards in the first place.

Go ahead, visitor, ask me about the rats again. Or the molasses.

"At the behest of Creative Time Kara E. Walker has confected: Kara Walker - A Subtlety or the Marvelous Sugar Baby an Homage to the unpaid and overworked Artisans who have refined our Sweet tastes from the cane fields to the Kitchens of the New World on the Occasion of the demolition of the Domino Sugar Refining Plant." will be open from May 10 until July 6, 2014. It is free and open to the public. See more photos, courtesy of Brooklyn Street Art, here.