The North Miami house where the Kardashians recently filmed "Kourtney and Kim Take Miami" has just been put on the market for $14.5 million.

Real estate agent Jill Hertzberg calls the house, dubbed Palazzo di Mare, "one of South Florida’s most astonishing single-family residences" that she and her partner Jill Eber have even seen.

And with good reason.

Besides its celebrity history, the San Souci mansion features a 16,500 square-foot estate and 340 feet of waterfront. That includes 8 bedrooms, 11 baths, 3 half baths and a basement that can house an astonishing fleet of 10 cars.

The massive complex reportedly took four years to build and is based on the aesthetics of an old-world Palm Beach estate, pulling inspiration from renown early 20th Century architects Addison Mizner and Maurice Fatio.

Although Palazzo di Mare pulls old-world glamour, the interior has all the bells and whistles of a modern palace.

There's a second-floor massage room and sun deck, a family room with surround sound system for a 80-inch television, a billiard room that houses two 70-inch televisions, as well as a bar and lounge area, according to The Jills.

The outdoor amenities are no less spectacular.

Kim and Kourtney reportedly rented the estate at 2095 NE 120 Road for $10,000 a month. They landed there after the City of Miami Beach rejected their film permits, Gossip Extra reports.

Yet the San Souci neighbors were not pleased with the film crews either.

However the City of North Miami, not often associated with luxury or celebrities, was grateful for the reality stars, even awarding them a key to the city last year.

Correction: An earlier version of this post incorrectly listed the square footage as 6,500. It has been corrected to reflect the accurate size of 16,500 square feet.

Click below for exterior shots of the Kardashian house:

PHOTO GALLERY
Kardashian House In Miami
Download
Calling all HuffPost superfans!
Sign up for membership to become a founding member and help shape HuffPost's next chapter
Join HuffPost
Voting Made Easy
Register to vote and apply for an absentee ballot today
Register now 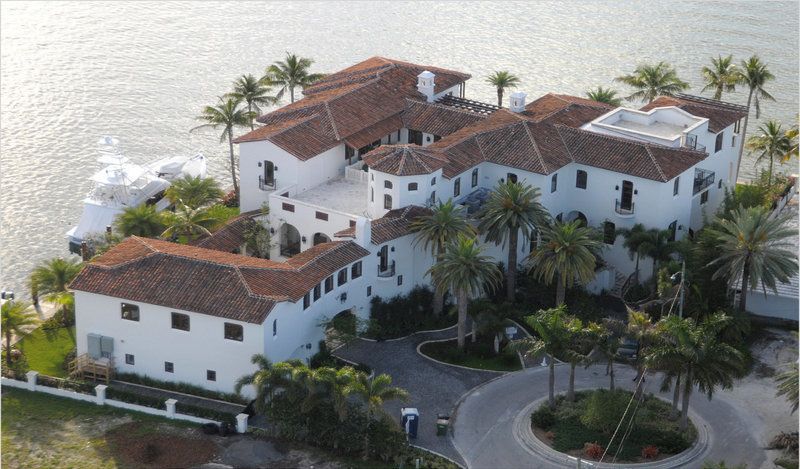