Karen Black died last week and she was my unlikely friend. 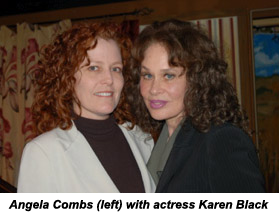 I say so because all the conventional markers could not have predicted it. I am an atheist, a feminist and a film director and Karen was none of those things. I plan fastidiously with storyboards and shotlists in pursuit of the dramatic truth. Karen sought the same truth, but through jarringly different means. She was not one for labels (though she was given many). Her unique ability to create character came so honestly from her refusal to define herself in the past or the future. It gave her a kind of freedom in her work and life that allowed her to connect so deeply and give herself so completely to every performance, and to every one of her friends. A freedom so many of us long for but never quite achieve.

Karen loved language and knew what a loaded word could convey, even if she could never completely throw off the misunderstandings and labels that dogged her throughout her life. I watched Karen create a character in my film, a character I labeled Bi-polar, that she brought to life with the tenderness of a mother and the respect of a friend. This was a process that could not be explained in words or clarified by any contrivance, method or school of thought. Karen instinctively moved into the dramatic action and effortlessly stood in the light.

I've read much about Karen since her passing, and the dynamic force that continues to emanate from the phenomenon that is Karen Black amazes me. To put her into perspective as the rare and wonderfully present human she was is not an easy task. I have been witness to the strange and inexplicable projection heaped upon her, good and bad, not only in those wonderful occasions when we traveled with our film, but also in the mundane communications of simple requests when perhaps ordering dinner at a restaurant, or seeking a specific comfort in her hospital bed. It seems her presence created the opposite of the "observer effect" known in art and science, which holds that observation changes the nature of what is being observed. In truth, Karen, the phenomenon, changed the observer by virtue of her singularity, her quest to be clear, to communicate fully, to be understood. In the end, it seems she reflects the "observer effect" back on ourselves, changing our nature, as she remains perfectly misunderstood.

Karen once described to me a great lesson she learned from Lee Strasberg. She was a young actress in his class, attempting to grow her craft, yet she didn't like him. What he said didn't sit right with her, somehow his personality rubbed her the wrong way, but she had trouble putting her finger on it. One day, however, Strasberg was as usual pontificating before his class, yet he was not wearing his trademark suspenders. As he lectured, he nervously fiddled with his now imaginary prop and it occurred to Karen that for all his undoubted wisdom, Strasberg was not living in the present. Her observation of Strasberg's simple conditioned response freed her. She realized that living in the present, recognizing something as simple as what is there, rather than imposing what we wish to be there -- this is was what it would take to inhabit the characters she was to play, and thus ended her relationship with the esteemed pedagogue. Karen was a great observer of human nature and she could see when someone was not in the present. Karen inhabited the present.

When we travelled with our film, Nothing Special, Karen had already become ill and was dealing with the early symptoms of her dreaded disease. I remember one particular occasion when Karen interacted with a Festival Director, making a simple request for food in her hotel room to calm her stomach. It was as if she was speaking in a foreign tongue that the Festival Director could not comprehend. All she could see was "Karen Black"; a newspaper clipping; a rumor; or worse, a complex character she brought to life on screen. The festival director could not accommodate a simple request for a bagel to calm a troubled stomach. Karen had become, that difficult actress, the diva written about, the eccentric italicized, so in frustration, Karen allowed me to be her translator, because she needed the bagel, and from that point forward, I became her go-between.

Karen could be eccentric, it is true, because (at least in part) there is no reason not to be eccentric when one's identity is completely twisted by the projection of others. Her incredibly sane choice to deviate from what was expected and thus to deliver what could be believed was at once a device to preserve her reason and a trap she could not escape, even now, after her passing. By accepting the fact that she would not be seen as her real and unaffected self, Karen allowed herself to disconnect from the insanity that fiction would attempt to impose, and she heroically decided not to conform to illogical rules. For instance, Karen once told me a story about a film set where she and her co-star were outfitted in zippered overalls to protect them from the bees that were also in the scene. The costumes were hot and she and her co-star did not wear clothes beneath. Inevitably, numerous bees invaded their overalls and her co-star ran screaming and jumping off set, patting his suit as he went, thus afflicting himself with multiple stings from the countless animals trapped innocently in his suit. Karen, on the other hand, calmly unzipped her gear, stepped out of her costume, and stark naked shook the bees to freedom and serenely put her suit back on. This was Karen - she made the logical choice, because she did not subject herself to the sometimes absurd dictates of decorum. Karen exposed herself and therefore freed herself while saving the bees.

Karen came to dinner on one of many intimate occasions at my home, and arriving early, she determined to put herself to good use. She requested 409, sponges and paper towels in order to clean an old tin-topped farm table that stood, serviceably on our front porch, between chairs and in reach of our drinks and food. When I popped out with our dinner, which included a roasted chicken (one of her favorites, possibly second only to pot-roast) with carrots and potatoes, to discover Karen scrubbing away at the old table, I asked "What are you doing?" and she replied, "I imagined I could make it sparkle, but it doesn't appear to be working". I blithely replied, as I set the roasted chicken down: "That old farm table won't ever shine. It was used for chopping the heads off chickens" and without a beat she retorted: "Well then, I'm shining up the karma, so we can eat in peace." Karen changed the act of eating chicken that night.

I've heard that Karen could be a difficult actress, but that was not my experience. She was a professional. She wasn't simply on time, prepared with memorized lines and ready to try anything in service of the character, she cared. She cared about every role she played, big or small. She endeavored to understand. She lived in the moment, the painful reality of her characters, in order to do them justice. She taught me more about imagining, discovering and listening than I could ever explain. She lived in the absolute present and we hypothesized often about the past, present and future. She preferred the present because it was the place in which one is most capable of experiencing something close to being real. She could, for a moment, experience the actual. But I liked to point out to her that many are not in the present because their now is too difficult and thus they prefer to live in hope and to think of the future, or to live in the past with the comfort of great memories. She simply replied, "I know" and looked at me deeply, sadly, penetrating and communicating with her tragic eyes, her deeply connected understanding of the human condition. Karen listened and understood, but rarely was she listened to.

In 2011, Karen asked me to throw her a surprise birthday party. How could one surprise the Birthday Girl requesting the party, I pondered. But once she had made the request, she no longer gave it a thought. She didn't wonder, will it happen or when? But on the appointed day, many weeks later, she rolled up in her car while prepping for the fake interview her husband had concocted as a ruse, and there we all stood, in the front garden, knowing she would look up when the car stopped and she might put two and two together. "Surprise!!!" we all yelled, and in her ashen bewilderment she stepped out of the car, completely flabbergasted, and I stood astonished at her ability of presence. A few days later she sent me a note with a picture of a large dog sprawled out on a cozy rug with a little white kitten perched on its massive ribcage. The caption read, "Some of the best relationships can't be explained." I cannot explain to you the great goodness of Karen Black, the plain friendship, the professional genius she brought to my life. But I can say that Karen Black was a mystery of nature that knew how to live in the moment. Karen Black was easy to surprise.

Karen's close friends and family took shifts at her bedside in the last days, and as it happened her dear devoted friend, Harriet Schock, was alone with Karen when she died and had the great fortune to hear her last words, beautiful words, which I cannot share, lest they be misunderstood.

A version of this post was originally posted on Women and Hollywood.