Karen Hultzer, who is taking part in the London Olympics as an archer for South Africa, has made her first public statement regarding her sexuality to online LGBT sports blog OutSports.com.

Last week, when Huffington Post Gay Voices published a story about the gay Olympians competing in London, we received a tip from a reader notifying us of a comment Hultzer's partner made to South African gay lifestyle website, MambaOnline.

The website relayed, "[Hultzer's] partner, Tracey Kim Saunders, told MambaOnline that Hultzer is happy to be identified as a gay athlete."

According to an OutSports story, published on sports news aggregation site SB Nation, Karen Hultzer had reportedly originally declined commenting on her sexuality because "she was wary of talking for fear that she might get distracted by more media attention ahead of the potential conclusion of her competition on Aug. 3."

Perhaps with the cat out of the bag -- or because she was no longer competing (the 46 year-old archer was eliminated from the competition on Monday, after being defeated by Pia Lionetti of Italy) -- Hultzer spoke to OutSports on Monday and made her first public statement about her sexuality:

I am an archer, middle aged and a lesbian. I am also cranky before my first cup of coffee. None of these aspects define who I am, they are simply part of me. I am fortunate that my sexual identity is not an issue, and I don’t suffer the level of discrimination and violence that black lesbians in South Africa do. I look forward to the day when this is a non-issue and as relevant as my eye color or favorite sushi.

With this statement, Hultzer confirms her spot as the only out Olympian competing from the African continent at the London games, and draws attention to the violent discrimination against black lesbian women in South Africa.

Now, she's enjoying the games from the sideline, making twitter commentary like, "Watching arrows in the rain at @HomeOfCricket #London2012 #archery - feels like Cape Town on a winters day."

Check out Karen Hultzer, and other out athletes competing in London, in the slideshow below. 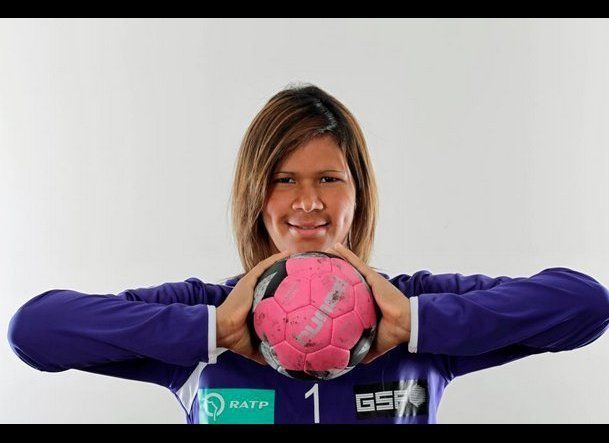 1 / 22
Mayssa Pessoa
The 27 year-old goalkeeper will play on the Brazilian women's handball team in London 2012.
Facebook