Somebody might listen to the new AST release, Karen Kilgariff's Live at the Bootleg, and spend days, weeks, months, years wondering what exactly makes it so wonderful. More likely, one may listen to it, enjoy it and not think much about it at all. However, when writing a review, it is common practice to listen to albums multiple times to try and fully absorb the nuances and lyrical depth. Usually, what ends up happening is that said album, no matter how enjoyable, turns into a self-inflicted tedious torture. The album, even if absolutely adored by the listener, becomes obligatorily meaningless through intensified repetition. However, by some miracle of the modern age, Karen Kilgariff somehow swerves out of the way of falling victim to what we'll call "The Obligatory Album-Critic Conundrum." So what is it? What makes Kilgariff so special? It's really simple. She is real.

Karen Kilgariff exudes an energy that is completely genuine. Her songs are honest and penetrating, never betraying her stage persona because it is not a persona, because it's pure truth. She is exposing her deepest fears and darkest failures in the most public and intimate ways possible (onstage in front of a live audience and inside people's headphones). That is what great comedy is. Embarrassment and failure that is made palatable to laugh at. Have you ever wondered why a person falling down is easily the funniest thing you've ever seen? It is because that is a brisk, blunt, perfect failure. And everybody can connect with that. We've all fallen down. Comedy should sting a bit. 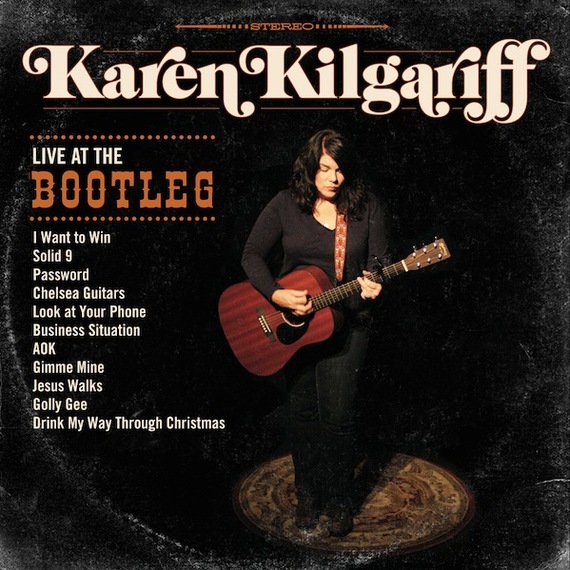 Karen Kilgariff is punk as fuck. In an industry of rock stars and actors constantly and consistently hiding any flaws to create a pretense of professionalism and perfection, Kilgariff takes the stage naked, highlighting her imperfections. She's rocking the halls of the anti-industry. She is a symbol of what is right about art and music and entertainment. Her heart rings out in harsh colors and agitating noise, yet synthesized down to three-chord, acoustic, short songs. The climax of her album is when she describes an Axe shampoo commercial that made her cry in disgust. She then goes on to play a cover of a Daniel Johnston, song without a joke or laugh in it, revealing the secret to her comic success: short, simple, deeply-felt songwriting. And if nothing else, what other comedy album has a cover of a sentimental Daniel Johnston song (that takes balls).

(I do my best to avoid referencing material on any new album. In equal parts to not spoil anything for people who haven't heard it and to insert an extra personal challenge in my work. In trying to poignantly pinpoint the stupid-rock-and-roll genius of Karen Kilgariff, for whatever reason, the temptation was too huge to ignore. So to avoid directly quoting any material on the record, I will instead quote the fictitious version of a real-life legend rock critic.)

In the film Almost Famous, Cameron Crowe wrote that Lester Bangs said, and then Phillip Seymour Hoffman performed the line, "These are people who want you to write sanctimonious stories about the genius of rock stars, and they will ruin rock and roll and strangle everything we love about it. Because their trying to buy respectability for a form that is glorious and righteously dumb. You're smart enough to know that. And the day ceases to be dumb is the day it ceases to be real. Right? Then it just becomes an industry of cool."

Philip Seymour Hoffman was a rare case of somebody who does not at all fit the model of success in Hollywood; yet he won its (arguably) most prestigious award (in other words, he was a fat guy who won the leading role Oscar). The only other person I can really think of who is in his company was Ernest Borgnine in 1955 (just so you have a sense of how crazy it was). And Karen Kilgariff is a woman who doesn't fit the mold to be an entertainer, but epitomizes the aforementioned quote. In all these ways, she is an iconoclastic maverick not to be ignored. Beyond that, she is a role model and beacon of hope for all men and women who struggle with body issues (where America is concerned, it must be most of the population). With subjects ranging from love and death to bitter jealousy and intrusive technology to unwanted deskwork and retail-related smugness, Live at the Bootleg delights and insights throughout.

People like to complain about things all the time. Every day there is new issue pushing its way into the hungry media circus and tentative political arena. You can't say a certain word anymore. We have to do something about all this bullying. Incessant wining and griping of the concerned, tax-paying citizens. Yet there is never any agreeable solution. Here's one: art. If an overwhelmed, bullied high school student heard this album, they would not commit suicide nor homicide. They would have found some solace. Just enough to make it through. There are some lucky youth able to find something to put themselves into, to focus their frustration, to alleviate their intense stress levels and calm their rage. "How do you know?" You're saying to yourself. Because I was one of those mixed up kids who was able find some solace that made soluble my immense stress. Artists are trees. Air is poison. It contains carbon dioxide, carbon monoxide and sulfur monoxide, which are harmful chemicals to human beings. Poison. But trees are these beautiful gifts that absorb the awful poisons and release oxygen. Every piece of art is a tree. Live at the Bootleg Theater is a tree. We need to plant more trees. We need to plant more art. Start now by getting Karen Kilgariff's brand new blooming, beaming cherry blossom.