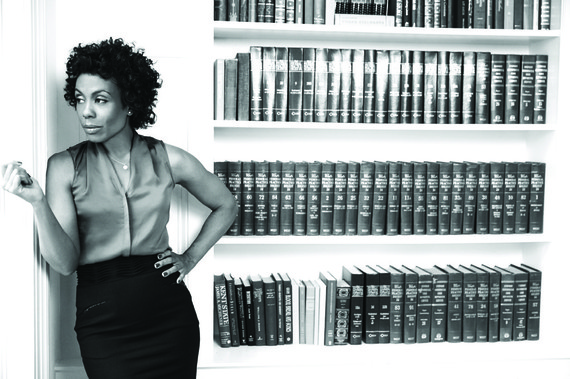 Karen Pittman is a star. Not a star like Viola Davis, Meryl Streep or Julia Roberts yet, but a star in the making. Pittman is currently co-starring in Ayad Akhtar's Pulitzer Prize-winning play Disgraced. Like Akhtar's celebrated novel American Dervish, Disgraced takes on complicated issues like religion, race, gender and identity construction in a world that claims these things no longer matter.

Pittman plays the role of Jory, a powerful lawyer, married to Isaac (Josh Radnor), a Jewish art dealer, caught in a quagmire that threatens to unhinge Amir (Hari Dhillon), a tightly wound Muslim American lawyer married to Emily (Gretchen Mol), a naïve, yet calculating, white American artist. Pittman steals the show from her more famous leads, delivering a powerful and impassioned performance that literally takes the air out of the Lyceum Theatre. You can literally hear a pin drop as Pittman becomes Jory, navigating her way through the precarious world of being a black woman in places that don't welcome them, despite their best efforts.

The character of Jory has completely disappeared when Pittman arrives for the interview dressed down. The actress, who has a recurring role on FX's The Americans, speaks softly and thoughtfully about the character of Jory. It becomes readily apparent that the Northwestern and NYU graduate has studied the craft of acting, and takes preparation very seriously.

As an artist, this play is the most true reflection of what I wanted to do as an actor. I feel like (Ayad) has a brush stroke for what this human being (Jory) should look. I don't think that it was a coincidence that we were sort of thinking about what this woman should look like and what she represents in the play in a similar fashion, which is why in many ways it has continued to come together for audiences.

Audiences are continuing to flock to the play that asks them to consider their role in the story. Who are these characters and who are you in relation to these characters? Pittman has an idea.

"Jory comes out of my 8-year-old imagination. I have to be a very mature person, but for a good part of my day, I get to be my 8-year-old self. Jory came right into the room and sat down next to me as I was reading. By the time I finished reading the story, she was a full-grown human being," says Pittman, which attracted her to the role. 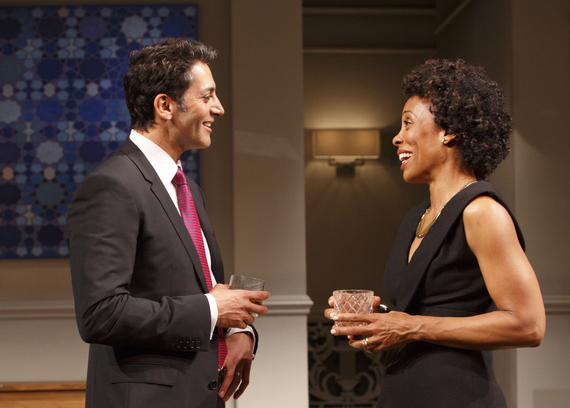 I read the story and thought that the story was a conversation that everyone needs to listen to, and then I went back through and read specifically who Jory was and what people were saying about Jory. That's when she sort of just sprung to life and sat down next to me and started reading lines with me. This sort of... personality disorder thing that actors have -- that was my process with her.

Like Pittman, her process to becoming a character is cerebral. Like Pittman and Jory, the reality of race and gender are never far away, despite what some may see as a privileged life.

"I'm thinking that we're lucky that we're living in the 21st Century," says Pittman as she delicately sips her tea.

My mother had to have that same level of resilience and focus as Jory. She was the daughter of a sharecropper and picked cotton in Mississippi. She had six other siblings. Her parents maybe got their education up to the sixth grade. But she lived during Jim Crow and during those times in America where women didn't have the kind of freedoms that we have now. There's a whole generation of African-American women who had to stay, had to you know just make choices that we don't have to make anymore. Jory has choices.

Pittman has choices in where she wants to live, the roles that she chooses and the extent to which she's willing to compromise her most important role, mother. Pittman speaks of her two children fondly and often. It is clear that they are the stars of her show and that her professional decisions are always made with them and her life's journey in mind.

"How I came to N.Y.C. is I that I have a mother who insisted on overachieving. I had a father who very much instilled in me that you can do anything. Not so much that you can do anything, but I just love you no matter what you do," offers Pittman. The child of educators, Pittman educates herself about her characters, potential roles and performances.

I'm not as apt to explore every avenue to put myself out there because I have two children. If someone says you've got to up and move to L.A., we'll send a plane for you, I'm thinking where are my kids going to sit on that plane. By the pure fact that I'm a mom and I have two kids, I can't really do everything or anything. That kind of keeps me grounded cause I think in some way I might lose myself without them.

Pittman admits that at one point in her adult life, she indeed had lost herself and was chasing pavements in pursuit of superficial reasons.

I sort of settled down and meditated and came to a space where I realized that you can't feed two children on a juvenile, immature desire to be seen. If you're going to keep acting, then what is your greater calling? What are you called to do? If you feel like this is your vocation -- God has called you to do this, what is your greater responsibility to this talent or gift or whatever.

Through a lot of "work," meditation and a shift in her thinking, Pittman came to the conclusion that she wanted to be of greater service to audiences through her acting. She decided to dig deep and to "hand herself over to the collaborative process as an artist," and this is when doors opened up and things began to happen. Realizing her gift as an actress and treating it as a gift has led to many opportunities, and Pittman is acutely aware of this factor.

"Once you start to get more fully connected to the life that you want, the stuff that you really desire, then what you need will keep manifesting itself," she offers.

Pittman prepares for life in the same way that she prepares for her film, television and stage roles -- paying careful attention to the details that make up who she is and aspires to be.

"For me, it's just getting a cup of coffee, taking quiet time, working out, picking up my kids, seeing them, looking in their faces -- just that thing where you are fully present in your life every single day, every moment for yourself. It's a real challenge," says the triple threat.

It's the eating right, doing the stuff that you have to do in order to be connected. Oddly, once you put it out in the universe that you're ready for whatever the world will bring and you start accepting it, you can't stop it when it starts.

Pittman is definitely an actress whose rising star has started and can't be stopped.

Disgraced runs at the Lyceum Theatre in New York City through March 1.

This article was written by Nsenga K. Burton, Ph.D., founder and editor-in-chief of the award-winning news site The Burton Wire.