Magnus Carlsen, the world's top-rated chess player, is expected to win every tournament he enters. The Norway Chess 2013 Super Tournament was tailored for him as a tribute to his previous successes. For the first time, he would compete in his homeland against some of the finest chess players in the world, including the world champion Vishy Anand. But after Sergey Karjakin of Russia won the first four games, the first place seemed slipping out of Carlsen's reach.

Carlsen beat Karjakin in the fifth round in a see-saw battle (commented below), but in the end lost the war. Karjakin scored his best tournament victory. Carlsen shared second place with the American Hikaru Nakamura.

The spoiler of the tournament was the Chinese grandmaster Wang Hao. He beat Carlsen in the penultimate round and Anand in the last round, forcing the Indian grandmaster to share fourth place with Levon Aronian of Armenia and Peter Svidler of Russia.

Nakamura booked another solid result after finishing second in the FIDE Grand Prix in the Swiss city of Zug in April. He chose Norway over the U.S. championship. In his absence, Gata Kamsky won his fourth U.S. title. This time he was forced into a playoff by the fast-improving Alejandro Ramirez. 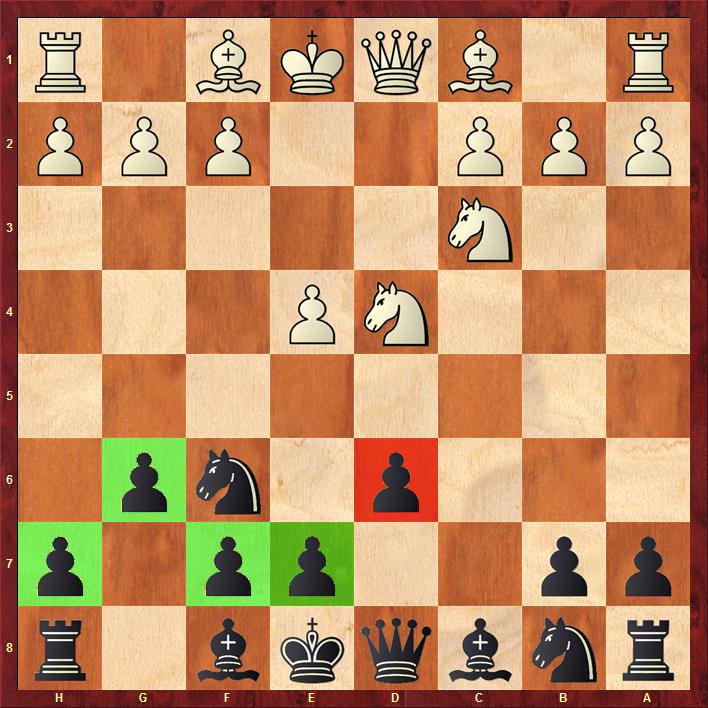 Once upon a time, a chess player looked up to the sky and thought that a certain pawn formation resembled a celestial constellation. In the notes to his game against Abram Rabinovich from Prague 1908, the Russian master Fyodor Duz-Khotimirsky claims that he invented the name Dragon variation in 1901 in Kiev: the pawn configuration d6,e7,f7,g6,h7 in the Sicilian looked to him like the Draco constellation.

We can find the Dragon formation as early as in 1880 in the game Schottlaender-Winawer, played in Wiesbaden, Germany. Others followed. One of them was the creative Moscow grandmaster Vladimir Simagin. He added a special dimension to the Dragon: the exchange sacrifice. He would rather give up his rook than to exchange his dark Dragon bishop. 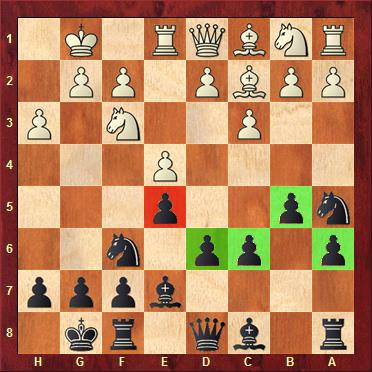 It is possible that Simagin didn't know that he mirrored the Sicilian Dragon. In 1957, the American grandmaster William Lombardy began to play the move 10...c6 and employed it in the next four decades.
The Spanish Dragon formation was better suited for the Spanish Breyer variation (9...Nb8), where it started to appear in 1954.

And this brings us to the fascinating Spanish duel Karjakin-Carlsen. 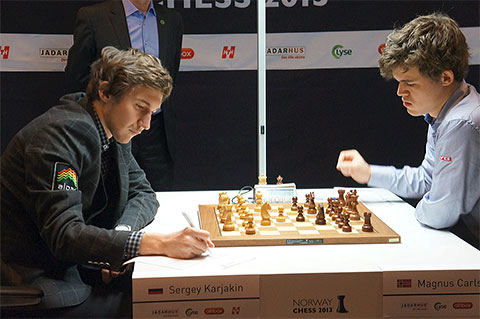 In 1954, the Spanish Dragon appeared in the Breyer defense for the first time after 11.c4 c6.

A 21st century move, concentrating on a swift development of the queenside. Sending the knight to the kingside 13.Nf1 Bf8 14.Ng3 was popular in the last century and after 14...g6 15.a4 black almost automatically played 15...c5, being afraid of Bc2-d3. But at the 1978 U.S. championship, Lombardy ignored the white threat and played 15...Bg7 16.Bd3 c6. I tried this Spanish Dragon formation a year later as black against Karpov in Tilburg. I drew that game after a fierce tactical fight, but I misplayed the opening. 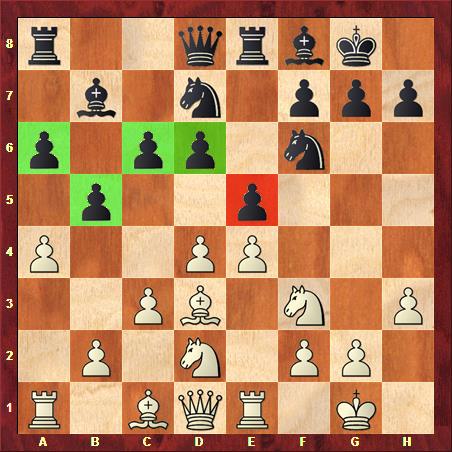 Carlsen reached the Spanish Dragon, a counter-punching structure. He got into this position in several games previously. His c-pawn is restricting white's d-pawn, but Karjakin has more space to operate.

Some players prefer to play g7-g6 at some point in this line and bring the dark bishop to the diagonal a1-h8. But Carlsen likes the bishop where it is and refuses to move the pawns in front of his king until it becomes necessary.

Having more space, Karjakin wants to keep as many pieces on the board as possible. He has a nice, compact position and plans to blow the center open with c3-c4. Black doesn't have many useful waiting moves.

The right moment to open the center. The tension intensifies.

Carlsen finally moves a pawn on the kingside, denying the white knight the square g5. After an indifferent move, for example, 22...Rab8 black goes down quickly after 23.dxe5 dxe5 24.Ng5 Re7 25.f4! and white has a decisive attack.

"It is clear white was better," said Carlsen. The game begins to gain speed. 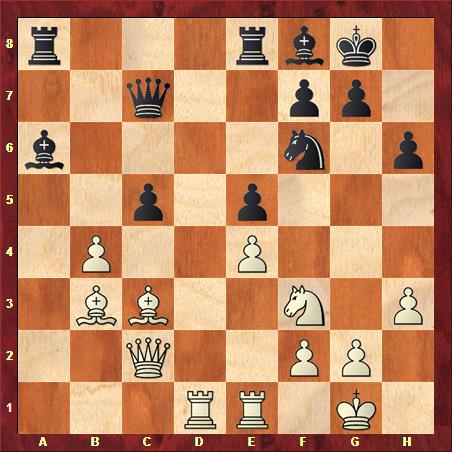 Karjakin keeps the queenside pawns on the board, giving his opponent fighting chances. Carlsen expected 26.bxc5 Qxc5 27.Qb2 and black can't properly defend the e-pawn. He wanted to play for a draw with 27...Bc4 28.Bxc4 Qxc4 29.Nxe5 Qa2 since the pawns are reduced to one wing.

A critical point of the game. 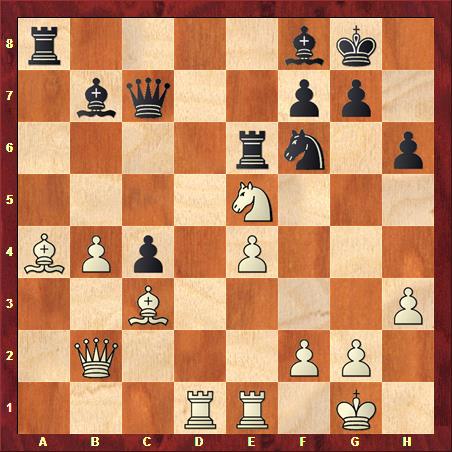 Too passive, allowing Carlsen to strike with a vengeance. 29.Bb5!? was an excellent way to keep up the pressure. The bishop attacks the c-pawn and controls the square c6 at the same time. It's difficult to defend: 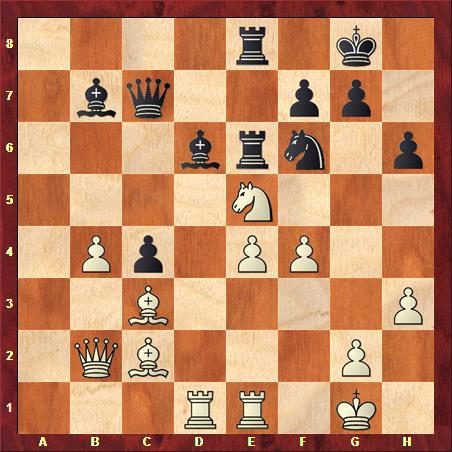 Carlsen considered 32...g5, but it was not necessary.

Carlsen was not sure what white missed, but it could be this move. The sacrifice rips open the diagonal h2-b8.
The alternatives are weaker: 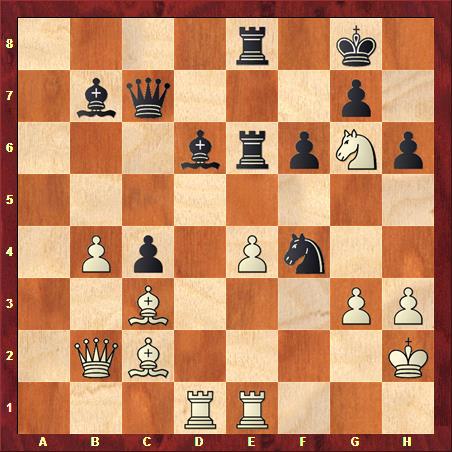 The only way, otherwise white goes down quickly:
Accepting the sacrifice 34.gxf4 gives black a powerful attack after 34...Bxf4+ 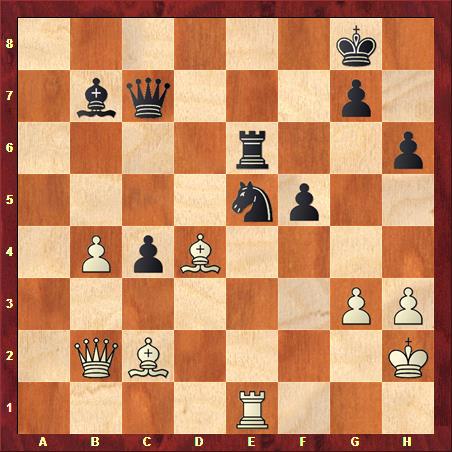 The knight is being sacrificed for the second time.

The mating threats force white to give the extra piece back.

A beautiful central domination of the black pieces.