A tea party group portrayed leading Republican strategist Karl Rove as a Nazi in an email it sent Tuesday -- and later had to apologize for it, blaming a contractor.

The Tea Party Patriots, a well-established group within the right-wing movement, sent out the message featuring a Photoshopped image of Karl Rove in a Nazi uniform, Politico reported. The email's subject read: "Wipe the Smirk Off Karl Rove’s Face."

The email was sent under the name of Tea Party Patriots co-founder and national coordinator Jenny Beth Martin in a fundraising solicitation. But Jameson Cunningham, a spokesperson for the group, said it was an unfortunate accident.

"The image was a mistake which was never approved by TPP,” Cunningham told Politico.

Martin later apologized, saying a vendor was responsible for the Nazi image.

“In an email sent under the banner of Tea Party Patriots, a manufactured image of Karl Rove was added to the email which Tea Party Patriots did not know about or approve," Martin said in an emailed statement. "The image, which was added by an outside vendor, Active Engagement, was inappropriate, wrong and we have ordered them to immediately cease further use of the image.

“We apologize to Mr. Rove," Martin added. "While we may have strong disagreements with him on the future of conservatism, we want to be clear this imagery is absolutely unacceptable and are working to ensure this type of mistake doesn’t happen again.”

The email called out Rove for hating on tea party members and hindering their success. Rove has backed other right-wing groups, such as the Conservative Victory Project, which Tea Party members have seen as a way to detract support and funds from their movement and block them from office.

The doctored Rove image continues the ongoing feud between Rove and the Tea Party.

“Karl Rove believes he can raise hundreds of millions of dollars, crush the Tea Party movement and protect the big-government status quo in Washington from millions of freedom loving Americans. Well, he’s wrong," the email states.

Tuesday marks the fourth anniversary of the tea party's founding. Martin has promised to "shock the world" by raising $1 million in ten days, according to the Washington Times.

The Tea Party Patriots' website claims that "the liberals and the big government Republicans don't think a bunch of ordinary citizens can band together and raise $1,000,000.00 in ten days."

See the Photoshopped image below:

Update: 3:50 p.m.
This story was updated to include the apology of Tea Party Patriots co-founder Jenny Beth Martin. 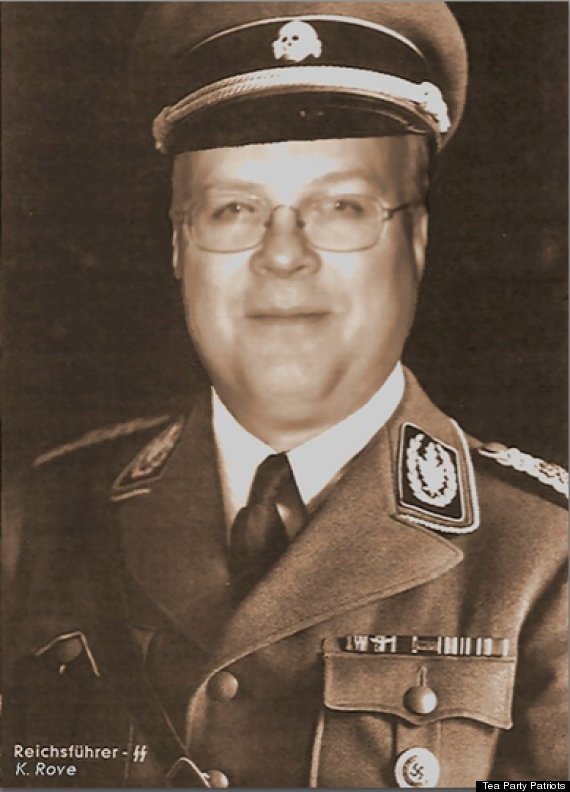 Karl Rove Through The Years