Karl Urban plays Bones in the reboot of the Star Trek franchise, and if you are anything like me, you think he was perfect for the role.  In his upcoming film, Priest, he plays Black Hat, a warrior/priest turned vampire.  Scuttlebutt says that it's going to be a bit different from the manhwa it's based on, but casting Urban means it has something going for it.  We got a chance to chat with Urban on the red carpet for the release of the Star Trek DVD/Blu-ray at Griffith Observatory in Los Angeles, where he told us how he feels about being part of a legendary franchise, his character in Priest and how he keeps breaking his poor co-star Paul Bettany. 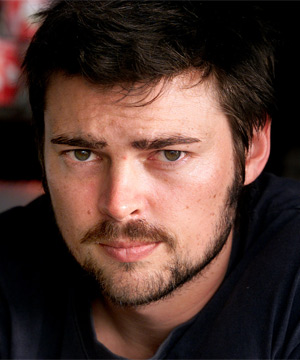 You get some of the best lines in Star Trek, but you didn't get to say one of the best ones, “He's dead, Jim.”

Are you working on that for Star Trek 2?

I certainly hope so!  You should ask Roberto Orci and Alex Kurtzman.  I hope they're working on that.  I was very blessed with some iconic lines.

Once you're part of the Star Trek universe, you're forever part of that world.  And the fans will remember you for that.  Is that daunting?

No, it's great.  You know what?  I watched the original series growing up and to be part of something that brought me such a huge amount of entertainment over the years is an honor and a privilege and a pleasure.  I had such a great time making this.  They're all really really wonderful people involved, and I look forward to continuing this journey with them.

Everyone else in the cast is saying that you are the biggest Star Trek geek.

[laughs]  Simon Pegg's pretty big.  Simon is very up with it as well.

Were there a lot of scenes in the theatrical cut that were cut out that you...have you seen anything from the DVD yet?

You know what, I haven't even had the opportunity to see the DVD yet.  I literally just found out that a big box just arrived at my house this afternoon while I was at work, so I'm looking forward to going home and watching.  It's full of Star Trek DVDs.  [laughs]

Can you talk about Priest and who you play in that film?

Yeah.  I play a character called, “Black Hat” who is essentially a warrior-priest turned vampire.  And the film is set in a post-apocalyptic sort of vampire world, at the end of generations of war between vampires and humans.  And that's where the story takes place.

How close is it to the comic book?

It's close in terms of certain visual nods, but it's also quite different. 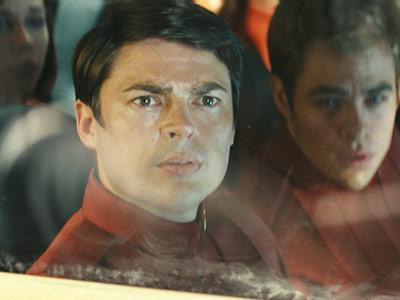 For people who've read the book and for people who are just interested in vampires, what will surprise them about Priest?

I think they will be surprised at the level of cinematic genius that has gone into it.  I mean, I haven't...they showed me some footage the other day and he (director Scott Stewart) shot the scene on the old Warner Bros. lot where they shot Blade Runner, and he really out-Ridley'd Ridley.  It looked amazing.  It looked, you know, crowd scenes, people speaking different languages...it was literally just jumping off of the screen at you.  The AD said, 'If you can speak a foreign language, please, we want to hear it.'  And it was amazing, you know?

And the enormous amount of nudity.

[laughs]  Yeah, clearly you've done your research.  I like that.

And what preparation do you do for your character?  What do you put into it?

Are there a lot of hand to hand fight scenes that you had to prepare for?

Actually, there is.  There is...preparation...I did extensive fight training for this because, literally, a third of the movie is action-based stuff.  And you know, what else...it's been an awesome time working with Scott and Paul Bettany who is really amazing.  I actually stomped on his finger and smashed my boot into his face, gave him a cut lip and he still worked.  He's a professional.

And he hasn't gotten back at you yet?

How dark is it?

Good question.  I think that it's going to have some pretty dark moments in it, that's for sure.  But it's, I don't know...

Because if I go in and see another Twilight...you do have fangs...

Dude, it's not another Twilight.  [laughs]  I do have fangs.

How much more shooting do you have to do?

Star Trek is available on DVD and Blu-ray now.