If you haven't already heard, the best pop tour of the year is already underway, and for your sake I hope you haven't missed it. Loving boyfriend/girlfriend duo Karmin are on the road right this minute with Bonnie McKee. If you don't know that name, you surely know her work. Bonnie has written songs for Katy Perry ("Roar", "Teenage Dream", "California Gurls", etc.), Britney Spears ("Hold It Against Me"), and Taio Cruz ("Dynamite"), among many others.

Hot off the heels of their first full length Pulses being released and smack dab in the middle of Bonnie's solo career taking off (last summer's "American Girl" was unstoppable), the two are joining forces for what is sure to be the most fun you've had in... well, ever.

Bonnie and Nick and Amy from Karmin chatted with me about their show is going to rock, pop and everything in between. Oh, and in case you hadn't already guess, yes, they are fans of one another. 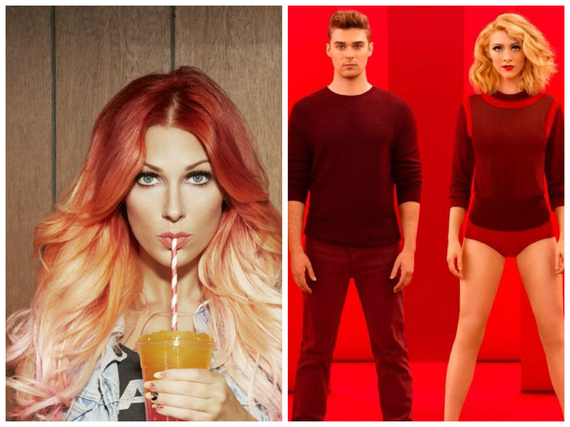 How excited are you going to the tour to continue?

Nick: We are very excited for it to continue. We played almost the whole album for the first leg of the tour which was kind of exciting and scary because we are playing songs to people for the first time and they had never heard them before. But with the second leg we're going to be adding the rest of the album. We're going to play the whole thing live.

Bonnie: I'm so excited. I've been waiting a long time to go out on the road the play all this music I've been holding onto for a long time for a real live audience.

So you're going to be playing a lot of unheard Bonnie McKee music?

Bonnie: That's right. I'm playing seven songs with my amazing band. I have an all girl band. We have kind of a Runaways thing going on. Yeah its all good stuff. I'm going to be putting out an EP in the next few months.

I know you guys (Karmin) did the first part of the tour with Bryce Vine, and now Bonnie McKee. How does it feel to play with someone like her?

Amy: Well we don't know yet. We love Bonnie. We got to write with Bonnie back in the early Karmin days. We've kind of become friends with her that way. I'm so excited she finally has her own project out now. We all know she's a really talented writer but as an artist she's very special. We really can't wait to share a stage with her.

Nick: Writing wise? I don't know that's a tough one. If we are talking pure pop, I have to say "Teenage Dream". From a pop angle it's incredible.

Amy: It's amazing. I can't wait to hear the full album.

Bonnie: I think my favorite is "Teenage Dream" and that was the most difficult to write. It was a serious undertaking. A lot of fighting, very time consuming, and we wrote five versions of it before we finally had "Teenage Dream". That was definitely an alligator worth wrestling.

Bonnie: I really like "I Want It All". I think it's a great song. Very Michael Jackson. I love the horns at the end.

Nick: "Pulses" is one of our favorites. It's one of the most unique on the album. We did "I Want It All" with one of our friends from Berklee that we know from years ago. He produced it. His name is Ryan Williamson. We actually don't know if it will be a single or not.

Bonnie, I loved "American Girl" and "Sleepwalker". Is your next single like one of those or something completely different?

Bonnie: It's very different. It's an Oliver track, so it's very electronic based but it also has a hip hop lean to it. Its very fresh. It's big and stadium and inspirational. All that I can give you about the title is that is a four letter word.

Its a four letter word but you can actually share the title?

What a tease! When can we expect that?

Bonnie: The beginning of June, but I'll be playing it on the tour, so anyone who comes out to the tour, lookout for a song with a four letter word name.

Give us an idea of what the Karmin live show is like.

Nick: There's a lot of energy. Definitely a lot of different instruments and then of course rapping and singing. It's kind of more like a rock show than a pop show.

Amy: I draw a lot of influence from No Doubt. The performance energy from a rock show with some attitude. Some feminine attitude.

Are you on track to be the next Gwen Stefani?

Amy: I think a lot of girls out there would hope that that would be the case. She's just incredible.

I wish I could be the next Gwen Stefani, please.