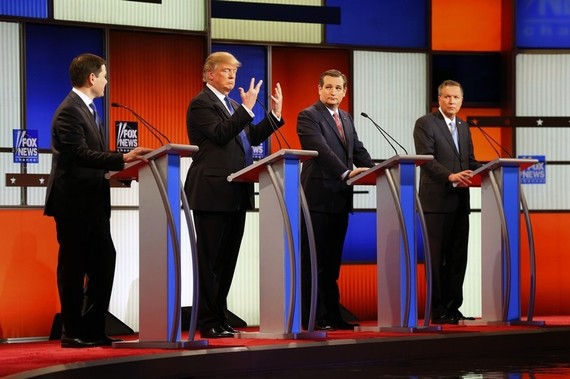 A not so funny thing is happening on the way to Donald Trump securing the Republican presidential nomination. He must increasingly deal with underhanded tactics that simultaneously conjure up the Viet Cong sappers from the Tunnels of Củ Chi and the knifing of Julius Caesar.

Behind this budding coup of the Grand Old Party is this dirty little secret: There really is no true "Republicans" left in the "Establishment Republicans" that John Kasich now seeks to be the tip of the spear of and that Ted Cruz seeks to selfishly leverage. This secret is immediately revealed by even a cursory review of Trump's impeccable Republican credentials.

Consider, for example, that Trump is a champion of small business, has vowed to slash the regulatory burden, and wants to dramatically cut the corporate tax rate. These are Reaganesque promises evocative of the heyday of the 1980s, and true "Establishment Republicans" should be all over Trump like A1 steak sauce on filet mignon.

On top of these attributes, Trump is a staunch supporter of the Second Amendment and strongly pro-life. He is an uber-Hawk on illegal immigration and has vowed to repeal Obamacare - even as he will stand up to the likes of Putin and Xi while rebuilding our shrinking navy and beleaguered military.

At their critical mass, they are the silk stocking CEOs of multinational corporations like Apple and Caterpillar and GE. These punks in pinstripes who salute no American flag and care not one whit for American workers want to maintain a status quo in which they are free to offshore their factories to the sweatshops and pollution havens and currency manipulation kingdoms of Asia, Latin America, and Africa.

In fact, the political power of these corporate titans has become immense in the wake of the Supreme Court's Citizens United v. FEC decision. It opened the floodgates to corporate contributions to America's congressional and presidential candidates, and today, these offshoring corporations have become the primary source of funding for the Republican Party.

The startlingly exception to this influence-peddling rule, of course, is the self-funded Trump campaign. It drives these corporate titans crazy that they can't get their influence hooks into Trump - even as it delights the long-suffering Republican masses that truly represent the Establishment and Party's center.

As for the guerilla warfare strategy Kasich and Cruz are now pursuing with the blessing and financial backing of the corporate elites, that strategy is as clear as Kasich himself has publicly made it, and its right out of the Viet Cong playbook. Like the Viet Cong could never directly beat the American military, Kasich will never directly beat Trump in the remaining primaries. Instead, he and Cruz will serve as the same kind of sappers that used to venture out from the tunnels of Cu Chi and pick off the occasional American platoon.

The sole goal of the Kasich-Cruz gambit is to deny Donald Trump the delegates he needs to secure the nomination before the convention. At that point, both Kasich and Cruz are counting on a not so divine intervention from the Establishment Corporate Elites jockeying for a pro-offshoring ticket.

Of the two guerillas, Cruz is the most dangerous in the long term. He is an inflexible, unlikable ideologue who is learning how to do two things in this presidential primary season very well: run a highly targeted ground war and disguise his extremism. Together, these attributes will make him a presidential candidate force for many election cycles to come.

As for Kasich, he has become Cassius to Trump's would-be Caesar, openly planning to stick the knife in Trump's gut come convention time - and then emerge on the GOP ticket with some version of Mitt Romney or the failed 2012 candidate himself.

Given Trump's popularity and his uncanny ability to mobilize and energize a Republican Party that has been on life support since the Coming of Barack Obama, this Sandbag Trump Scenario would be laughable in the extreme if not for the difficult delegate math that Trump now faces as he seeks to nail down the nomination before the convention.

Of course, should the Establishment succeed in dumping Trump, it would shatter the Republican Party into a million angry shards - and hand the election over to the Democrats. But that Establishment increasingly sees a pro-offshoring Hillary as the most profitable option - and that is indeed the saddest truth facing the Republican Party today.
_______
Peter Navarro is a professor at the University of California-Irvine. He is the author of Crouching Tiger: What China's Militarism Means for the World (Prometheus Books) and director of the companion Crouching Tiger documentary film series. For more information and a free copy of the film, visit www.crouchingtiger.net.