NEW YORK -- The lobby of the Ace Hotel was bustling on a recent Monday afternoon. Twenty- and 30-somethings in scarves, chunky sweaters and jeans typed at laptops and huddled around French-press coffeepots at communal tables.

In blue jeans, boots and a black top, Cole, 36, blended so well into the Ace Hotel’s hipster hive that she was difficult to spot. She was in New York promoting Cinnabon’s starring role in the pilot of AMC's eagerly anticipated “Breaking Bad” spinoff, “Better Call Saul.”

Cinnabon gave away mini-bons Monday in honor of the brand's appearance on the show.

A week earlier, after four years running Cinnabon, Cole had been given a bigger job, overseeing licensing, manufacturing and e-commerce at Focus Brands -- the company that owns Cinnabon and other chains.

She’s come a long way in a short time, and took an unusual route to get there. She started her career as a teenage waitress at Hooters. By age 20, she had dropped out of college and at age 26 she became a vice president at the wing chain. Cole eventually earned her MBA at Georgia State University, graduating shortly after she started at Cinnabon as the company's chief operating officer in 2010. But today she’s still a rarity in the highest echelons of corporate America, which are largely populated by middle-aged white men, many of whom have elite degrees.

This atypical career path has not hurt Cole. In a lot of ways, it seems to have helped. Cole thinks her background has made it easier for her to find solutions that somebody with a classic pedigree might have overlooked. And her experience has taught her that any one of her employees is worth consulting -- because, who knows? They too could be corporate-executive material. 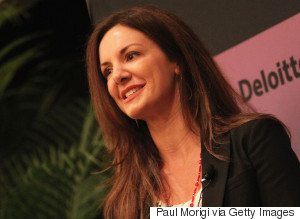 “When you’re not used to having doors opened for you," Cole told The Huffington Post, "you will do things and have meetings with people and spend your time in places that maybe someone with a more traditional path would think is too small or not deserving of their time or their energy."

Cole said she has developed a “really tough skin,” a quality that she credits with helping her handle failure more constructively.

“When you have people who question why you are where you are, or who treat you very differently, as if you don’t deserve to be there because you’re young, or female, or in my case, a Hooters girl, it’s really interesting the muscle that that builds,” she said. “You have to develop that over time to not be totally shaken every time you walk into a boardroom, or every time someone is an asshole.”

Research suggests that traditional backgrounds don’t always help corporate leaders succeed. For example, CEOs with Ivy League degrees do no better than other CEOs when it comes to things like stock performance and profitability, according to a study from Brian Bolton, a finance professor at Portland State University’s School of Business.

“It’s hard for boards or for executives to hire unknowns,” Bolton told HuffPost. “They default to what’s safe, and hiring an MBA from Harvard is safe. It’s going to be accepted by stockholders and employees.”

But if Cole’s success is any indication, the safe option may not always be the best one.

Cole took the reins of Cinnabon four years ago during what she calls a “really shitty” time. The sluggish economy was keeping people away from the malls and airports that are Cinnabon’s typical environs.

Her plan to turn the company around involved reaching out to others for partnerships -- a tactic she believes was heavily influenced by her background. She speculates that leaders with a more typical pedigree might have been less willing to look outside the company for help.

Cole approached it differently. She and her team pitched packaged-good companies and other fast-food chains on the idea of working together to create a line of Cinnabon-branded products, such as Cinnabon-flavored Green Mountain coffee, Cinnabon Air Wick and Cinnabon Vodka. (And in some cases the companies came to Cinnabon as well).

It worked. Sales of those products grew to more than $1 billion by 2013, and now they make up about 75 percent of Cinnabon’s total global product sales.

“We had this serious humility -- we weren’t too good for anything,” Cole said. “I’ve seen other leaders not be that scrappy and take much longer and spend a lot more money trying to turn something around.”

It turned out to be a trendsetting approach. Darren Tristano, executive vice president at the market research firm Technomic, said he expects McDonald’s and other chains to get more branded products into grocery stores down the line.

“That’s something we’re going to see a lot of,” Tristano said.

Cole’s experience has also given her a healthy respect for the rank-and-file worker. When she took over Cinnabon, instead of shelling out for consumer research, she spent 60 days visiting franchises all over the country, meeting with owners and workers, making Cinnabons and ringing up customers to get a feel for what the company needed.

“It hasn’t been that long since I’ve been that hourly employee," Cole told HuffPost. "I remember that people doing the work every day are the ones who really know what the answers are."

Cole’s days as a server are so fresh in her mind that it still hits a nerve when she sees a customer treating one poorly. She recalled an incident a few years ago, in the same Ace Hotel lobby, when a man sitting next to her berated a waitress for not bringing sugar with his coffee.

“As I was watching her and sitting so close, I just remembered it. I remember people yelling at me, I remember people being unnecessarily disrespectful and looking at me -- because I was in orange shorts, serving chicken wings -- like I was the scum of the earth,” Cole said, sipping coffee about a foot away from where the incident took place.

Cole said she scolded the man and gave the waitress “the biggest tip I think I’ve ever given in my life,” in the hope that it would encourage her to stay positive.

As her career advanced, more and more people began asking Cole to speak about her history, which included watching her mother feed her and her siblings on just $10 a week for three years after she divorced Cole's father who was an alcoholic at the time. A year or so ago, Cole, wary of overexposure, briefly considered taking a break from talking to the media. Then a mentor criticized her for not using her platform to inspire others. That mentor died just weeks after giving Cole that piece of advice.

Other executives may want to embrace aspects of their past that don’t fit the CEO stereotype, Cole said. She suggested that her story may not actually be that unique.

“A lot of executives were waitresses and bartenders and hostesses, but they don’t connect those things” to the success they’re having now, said Cole.

Raising her hand slightly above her head, she added, “It’s like they have to stay so up here."