After a long hard day of duking and duchess-ing, even the poshest among us would be ready for a cocktail.

Perhaps in need of a fun night out, Kate Middleton and Prince William sidled out to a Mayfair club on Wednesday night with none other than... Pippa!

Wednesday was a busy day for both the Duke and Duchess of Cambridge, as William attended the funeral of his childhood nanny Olga Powell, and Catherine went on a visit to Newcastle solo. (Will was originally scheduled to go with her.)

Post-events, then, the couple made a rare social outing together, slipping almost unseen into Loulou's, an exclusive London club for private members only. Shortly after, Kate's sister Pippa Middleton showed up -- because let's face it, if you want to have a good night out in London, Pippa's probably your best tour guide.

Fashion-wise, Will went for the Casual Prince™ look, wearing a black blazer over a jauntily unbuttoned white shirt. Kate did the princess version of the LBD, covering up in a long black coat. (It might be clubbing, but it's not like a duchess can step out in an Herve Leger bandage dress.)

The pair were swept inside at 10 p.m. and stayed for a few hours, the Daily Mail reports. Pippa reportedly took a taxi home at 2:30 a.m.

Also along for the party? Princess Eugenie, who brought her boyfriend Jack Brooksbank along. Painting the town red the young royal way -- not too bad of a night.

See a pic of Kate and Will leaving the club below -- there's more photos at the Daily Mail. 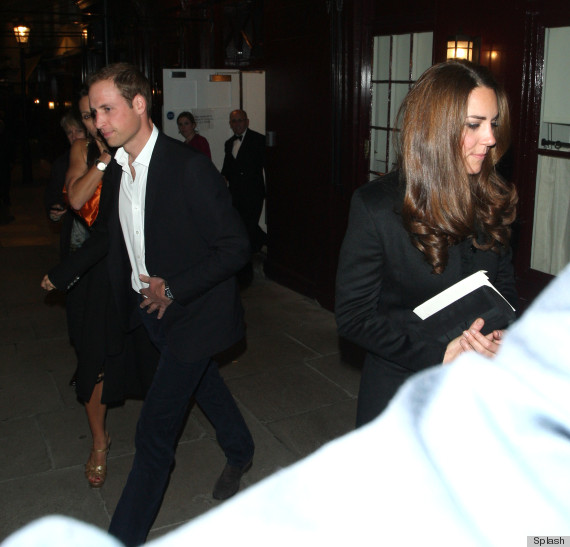