In case you thought that long-awaited Kate Moss Playboy shoot wasn't actually going to happen, Playboy is kicking things off with a preview photo. Running as a "Next Month" teaser in the December 2013 issue of Playboy, the picture shows Kate doing her best Bunny: strapless leotard, high heels, a puffy tail and those signature ears.

The full spread plus the cover will run in Playboy magazine’s 60th anniversary January/February 2014 issue, coming out in early December. In the meantime, we've got this Mert Alas and Marcus Piggott-shot photo to hold us over. And to be honest, it's giving us hope: The pic is simple, straightforward, nostalgic... and perhaps even a bit tasteful?

But hey, Kate Moss is always surprising us. Will you be buying yourself an issue of Playboy once the real thing hits the newsstands? 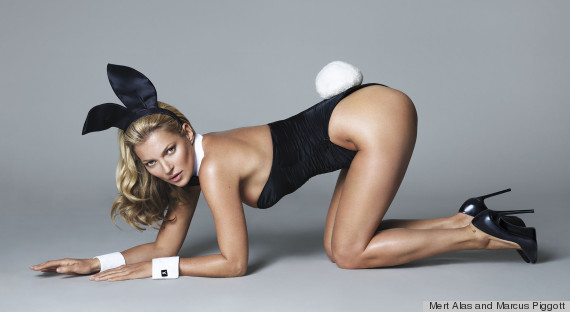