After months of speculation, the buxom model has landed a full spread in the June issue of the fashion bible. The stunning cover features Kate in a bathing suit and stilettos with teased hair and major statement eyebrows. Inside the mag, the profile focuses on -- what else? -- the 20-year-old's trademark feminine figure.

In an interview with Lizzie Widdicombe, Kate talks about the constant media scrutiny -- specifically, the uphill battle she faces being a relatively curvy woman in an industry dominated by waifs:

Of course, Kate rose to fame after a sexy YouTube video and an even sexier cover for the 2012 Sports Illustrated Swimsuit issue (followed by a consecutive one in 2013), so she hasn't seemed to be affected by the criticism from the fashion world. She's brushed off negative comments by a Victoria's Secret stylist ("she's like a footballer's wife") and troubling depictions on "thinspiration" sites.

“It’s kind of funny to think, Oh, wow, the news is talking about whether I’m fat or not,” she told Vogue.

Plus, the bombshell has plenty of validation in the Vogue department, scoring covers for both Vogue UK and Vogue Italia, a short mini-feature in American Vogue's November 2012 issue and even a cover for former Paris Vogue editor Carine Roitfeld's new luxury glossy, CR Fashion Book. Not too shabby for a gal who prefers bikinis to couture.

Check out Kate's June Vogue cover and read her full interview on Vogue.com. 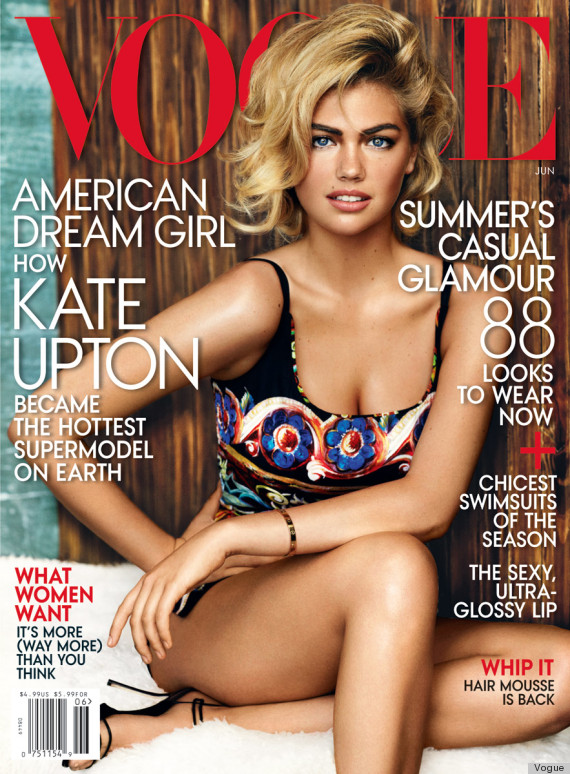