Thought you'd seen the last of Kate Upton? Not so fast. The Sports Illustrated model is still steadily working her way to the top, not stopping until she lands a coveted Vogue cover.

At least that seems to be the logic with her most recent gig: the January 2013 cover of Vogue UK. After scoring the cover of the 2012 Sports Illustrated Swimsuit Issue, the curvy blonde bombshell started angling for more high fashion gigs. Surprisingly, the fashion world welcomed her with open arms: first smaller magazines, then a small front-of-the-book story in Vogue, then a Vogue Italia cover, then a full editorial spread in Vogue.

Now Upton's nabbed a Vogue UK cover, chosen by editor-in-chief Alexandra Shulman for her refreshing versatility. "When I decided to shoot Kate for our first cover of 2013," she told Vogue.co.uk, "it was to kick off the year with a young women who is not a stereotypical fashion model - although, let's face it, she's hardly a heffalump!"

Indeed. Kate looks youthful yet elegant on the photo, wearing a knit white dress with her hair down in soft, retro waves. Neither overly sexy or painstakingly dowdy, this new look for Upton might be just what Anna Wintour's looking for: after a Vogue Italia cover, a Vogue UK cover and two Vogue US features, the only place left is a Vogue cover.

Think Kate will get the nod from Anna in 2013? Check out her latest cover below and sounds off in the comments. 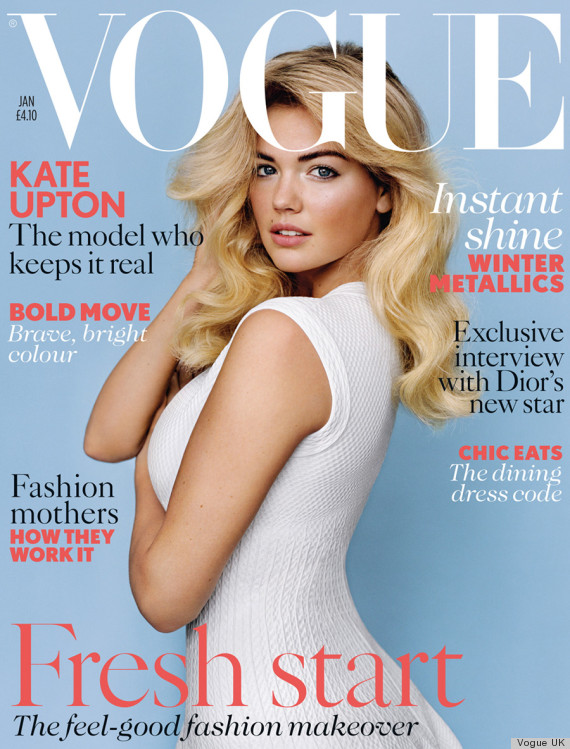