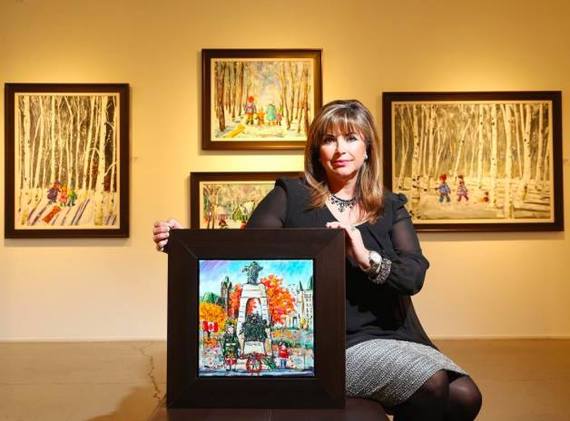 Two cheerful eyes, a forehead covered by bangs and an open smile. This is the face of the artist, Katerina Mertikas, who paints the icy images of Ottawa in her home studio, recording wintry scenes of children wearing bright colors and many others inspired by the Canadian landscape.

Katerina Mertikas is well-known for painting Canadian children enjoying the snow, playing hockey and skating or frolicking in the rain under their colorful umbrellas. So much so, that many of her paintings have adorned Unicef's Christmas cards for years.

This year, she was inspired by the tragic murder of Canadian army reservist, Captain Nathan Cirillo, at the National War Memorial in Ottawa. Her painting of the soldier and his child figured prominently in the media and Mertikas and her gallery decided to allocate the money from the sales of the copies of the painting to a fund created for the orphaned child of Captain Cirillo.

Since when has Katerina Mertikas been painting?

Since I was a little girl in Tripoli, Greece. I drew anything I would see with my little pencil. Later, in high school, I decided to become a fashion designer but I was married at 17 and had children shortly after. However, every day, on my calendar, I would write that, one day, I would become an artist. That, one day, I would paint again. When my daughters went to school, I returned to the brush. My first paintings were bought by friends.

Katerina advanced quickly as her paintings, although somewhat naïf, are powerful given the magic touch of the children and the colors. "Our late friend, Limbi Mitsoulis, convinced me that I could paint professionally, upon which a gallery in Ottawa organized an exhibition where all the works were sold. So, from my humble beginnings as a self-educated painter, I entered the mainstream art scene."

How did Unicef choose the paintings of Katerina Mertikas for its Christmas cards?

"Oh! I was lucky! In 1993, I sent a sample to Unicef and they immediately accepted to print my work on their cards, making me the first Greek female to have her paintings adorn the Christmas cards of the international organization. I feel very proud to have received such an offer."

On TV, I witnessed the cold-blooded killing of the guard at the Tomb of the Unknown Soldier, right in the heart of Ottawa, just a short distance from me. Frankly, I was shaken. When I heard that the 24-year old soldier had left behind an orphaned child, I put my brush to the canvas and started painting...the father who was killed while on duty and his 4-year old son with a big question on his face.

Mertikas' artwork had already been making headlines as she was exhibiting at Ottawa's Koyman Galleries at the time. So, with her generosity and the cooperation of Koyman Galleries' patron, the Greek-Canadian artist decided to print and market a limited number of copies of her painting, the proceeds of which would go into a fund for the orphaned child. "I met the child's grandmother who was instrumental in his upbringing and I am overjoyed that we have already collected $50,000. The idea has spread and we are receiving more donations everyday."

Katerina recently accepted an invitation for tea at the Prime Ministerial residence from the wife of the Canadian Prime Minister, Laureen Harper, who also gave her a donation towards the fund.

The painting was hung in Ottawa's City Hall and instantly became a symbol of solidarity between the citizens and the victims of terrorism. Many copies have been purchased by schools and public institutions and I feel a deep satisfaction that a project I initiated has created such profound social interest.

So what is the self-taught artist from the town of Tripoli, in Greece, a mother of two daughters and grandmother of five, doing in her fifties?

Today, she is teaching the passion of color in schools and communicating the art of painting to women's groups and she smiles at the thought that her work will illustrate an upcoming children's book. Passionate and focused, she is fully enjoying her current roles as daughter, wife, mother and grandmother and her dips into her pool of colorful art! 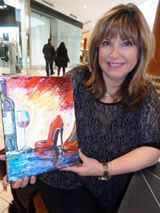 Pictures: courtesy of the artist