That was my reaction when I heard that Katharine Hayhoe was being deluged with hate mail after stories surfaced that she had written a chapter on climate change for Newt Gingrich's upcoming book, a chapter quickly dropped when conservative commentators began making a big fuss about it. Similar attacks have been leveled against MIT scientist Kerry Emanuel following his speech at a forum for Republicans concerned about climate change. The "frenzy of hate" he's received include threats to his wife.

Anyone who has ever listened to Hayhoe would be as sickened as I was over the vitriolic attacks she has endured in the past week. Being both a climate scientist and an evangelical Christian, Hayhoe speaks to faith communities, explaining the science of climate change in easy-to-understand language and also offering the spiritual perspective on global warming: What would Jesus do about climate change? 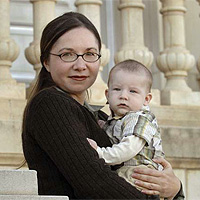 On our conference call with Citizens Climate Lobby volunteers last November, she came across as one of the sweetest and likable persons you'd ever hope to meet (You can listen to that call here). The mother of a two-year-old who's married to a minister and works on climate science at Texas Tech University, Hayhoe never has a harsh word to say about anyone, especially those who disagree with her on the science of climate change.

Like a true Christian, she's done an inordinate amount of cheek-turning lately. News that her chapter was being dropped from Gingrich's book came not from the candidate or his staff, but from the media seeking her reaction. She, however, has been more than gracious. I immediately thought to approach her about posting the "missing chapter" on our Website, but she declined our offer, saying she did not want to demonize Newt or be mean-spirited.

Did I mention that Hayhoe put in 100 unpaid hours on that chapter?

I'm sure Gingrich wasn't aware of it. Not that it would matter. The former House Speaker has been too busy backpedaling on the climate issue in order to appease the anti-science wing of the GOP that currently calls the tune. When his presidential campaign started picking up steam in December, Mitt Romney went on the attack over Gingrich's ad with Nancy Pelosi on climate change. Before the cock had crowed three times, Gingrich vehemently disavowed the commercial ("I tell you, I don't know the woman!").

The trouble with flip-flopping on an issue, though, is that it's hard to cover all your tracks. Four years ago, Terry Maple, who co-authored A Contract With the Earth with Gingrich in 2007, approached Hayhoe to write the opening chapter of their next book. Word got out about the collaboration in December, and before you could say "Ditto," Rush Limbaugh was blasting Gingrich for working with a non-denying climate scientist, even if she was a Christian.

The disappointment of being dropped from Gingrich's book, though, is nothing compared to the onslaught of hate mail that Hayhoe has endured. Though she's too polite to repeat the words used in those messages, one gets a sense of it from this quote in the Globe and Mail:

"The attacks' virulence, the hatred and the nastiness of the text have escalated exponentially. I've gotten so many hate mails in the last few weeks I can't even count them."

It's been the same for MIT's Emanuel since a video -- "New Hampshire's GOP Climate Hawks" -- featuring him was posted on Mother Jones' Climate Desk. His remarks were subsequently distorted by right-wing bloggers, some of whom published his email address. He described the emails in a Mother Jones interview:

"What was a little bit new about it was dragging family members into it and feeling that my family might be under threat... I think most of my colleagues and I have received a fair bit of email here and there that you might classify as hate mail, but nothing like what I've got in the last few days."

Are there new depths to plumb in this "debate"? Physical violence?

I certainly hope not. I'm sure that the Republican candidates for president, even the ones who vociferously deny the existence of climate change, are appalled at the turn the discourse has taken. They should be speaking up and calling for a halt to the hate mail, to keep the conversation civil.

It could start with Gingrich stepping up to condemn the attacks on Hayhoe. As his prospects for the Republican nomination rapidly wane, I hope he'll feel less compelled to appease the vocal and volatile climate deniers. I hope he'll reinstate Hayhoe's chapter in his book with a heartfelt, "My apologies. You shouldn't have been treated this way."

If there's anything positive to come from the attacks on Hayhoe and Emanuel, it's the realization, hopefully, that the deniers have bottomed out. As anyone in a 12-step program can tell you, there's nowhere to go from here than up.