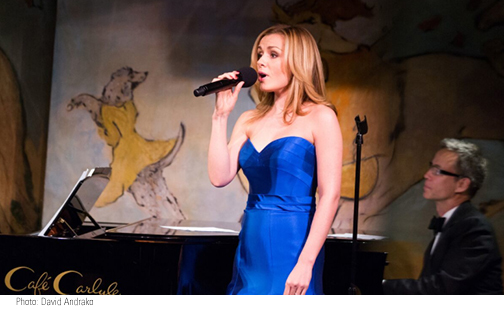 At Café Carlyle this week, Katherine Jenkins' magnificent voice fills the intimate room with Leonard Cohen's "Hallelujah" even before she gets to the stage, a wonder in a strapless magnetic blue ball gown. Billed as a Welsh superstar, a title you would never dispute, she sings opera, folk songs, and show tunes, and tells tales of the Carlyle's special resonance for her, having lunch with the Queen, touring with Andrea Bocelli, and being summoned by Andrew Lloyd Webber, to sample some "Phantom of the Opera" compositions. At times, you think the glasses on your table will shatter, but Katherine Jenkins is in total control for her set, "Viva la Diva."

Introducing "Carmen" as her favorite opera, she announces her diva pose translating the words to the familiar "Habanera," "If I love you, you'd better watch out." All she needs for accompaniment is Gerard Steichen at the piano, as she performs the Welsh national anthem, "O Sole Mio," and Harold Arlen and Yip Harburg's "Somewhere Over the Rainbow." She was surprised, she said, performing this last for the military in Iraq in 2004, how the soldiers--maybe 4,000-- "sang back." She made a play list for her six month old daughter that included Billy Joel's "She's Got a Way;" her way of singing with her baby in mind gave new contours to the piano man's classic. For Phantom's "All I Ask of You," she brought Kyle Barisich to the stage for a moving duet.
Toward the end, Jenkins admitted her fascination with "Dancing With the Stars," how she loved learning jive and the Argentinian tango for the show. As she sang Lerner & Loewe's "I Could Have Danced All Night," you could picture her, perfection in a ball gown, atwirl.