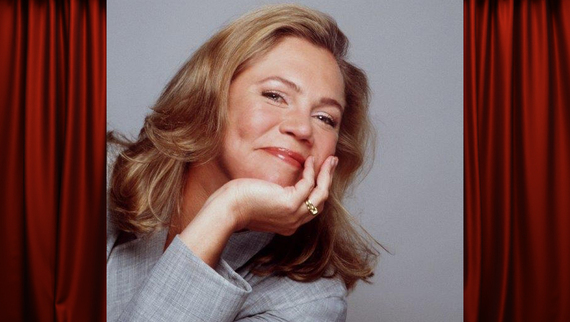 There she is: The incomparable Kathleen Turner in a pair of fiery red cowboy boots and an oversized denim button-down shirt. She sits on the floor, center stage, and makes observations over newspaper articles. "Personally, I love Americans," Turner remarks in fabulous Texas twang. "We think that the last words of 'The Star Spangled Banner' are 'play ball.' Huge numbers of us believe in flying saucers, palm readers, horoscopes and pyramid power--a nation undeterred by reality! No wonder we went to the moon.

"And Iraq," she quickly points out.

This is Turner, but it isn't Turner, per se. Rather, it's the embodiment of the late Molly Ivins in "Red Hot Patriot: The Kick-Ass Wit of Molly Ivins," now playing at Berkeley Repertory Theatre. Ivins--few words can sum up the lady. She was the rowdy ranconteur/liberal journalist from Texas whose political rants and reflections are now the stuff of legend. She passed away in 2007 and her bestselling books--Bushwhacked and Who Let The Dogs In? among them--were breathtakingly honest. Ivins became, like Mark Twain before her, one of America's beloved satirists and a downright refreshing voice of reason in a befuddle political climate. Let's face it: a great many loved Ivins, and her ability to pull down the political trousers of the "old boy's club" is revered.

This wouldn't be the first time Turner embodied Ivins. The Oscar- and Tony-nominated actress took on the role several years ago, but this does mark Turner's debut at Berkeley Repertory Theatre, still one of the most impressive cultural outposts in the nation in terms of its diverse creative menu.

Turner, of course, gave memorable turns in numerous stage roles--"Cat On A Hot Tin Roof," "Whose Afraid Of Virginia Woolf", "The Graduate"--and a slew of diverse films--Body Heat, Peggy Sue Got Married, Romancing The Stone, Prizzi's Honor, The Accidental Tourist and more recently, Dumb and Dumber To. Of D&D2, she candidly remarked recently that she took on that role to have fun and to, at last, say on screen: "Yeah. I don't look the way I used to. So what?"

Here, the actress opens up about Ivins, acting and much more.

Greg Archer: Molly Ivins. What a woman. And you as Molly. And you in your Berekely Rep debut...

Greg Archer: Molly Ivins. Clearly she resonated with you. A few reasons why?

Kathleen Turner: I was fortunate enough to meet Molly. She was, as I am... Well, we show up, we stand up, we speak up for these organizations. Our paths crossed a couple of times. I had this extraordinary thing happen. I was living in this building in New York at 66th and Broadway, yeah? And [Governor of Texas] Ann Richards had taken an apartment there for her medical treatments and such. I walked into the building one day, and Ann and Molly are standing by the elevator, and they look at each other, and then they look at me, and they say, 'Well, you're coming with us.' And I went, 'Yes I am.' So I got to have time with these two women going at it with each other and it was just glorious.

Greg Archer: Would have loved to heard those conversations.

Kathleen Turner: In any case, in my life, it's terribly important for me to be an activist; to be part of things I believe in and show up and speak out. In that sense, I feel very bonded to Molly, because she believed strongly in people's ability to do something, as do I. And so, obviously, I am attracted to that. And of course, the women's brilliant charm and political savvy. I mean, this woman knew how the Texas legislature worked. And just where to hit the right button, babe. Ya know? It is just so satisfying to listen to her words and thoughts.

Greg Archer: I was going to ask you about that--stepping into her shoes; morphing into her. How is that for you?

Kathleen Turner: It's a fine line in there. It's a little bit of a balancing act, because I don't consider that I am imitating her. What I do is act a character that is based on Molly Ivins. And I want to be true to Molly. I tell you something, when we first created this character, the first week, Molly's brother came up to me and wrapped his arms around me and said, 'thanks for keeping Molly alive.' Now, that was huge. Huge. Boy, I started crying right then.

Greg Archer: I'm sure each role has its challenges, so what was challenging stepping into this?

Kathleen Turner: Well any one-person show is a biggie. You have to find the right balance between, oh, making it a drama, being entertaining enough, but keeping why you are doing it alive. Look, here's the thing: Molly was a brilliant writer--a lot of things she wrote; a lot of material. Why should you come see this play instead of reading Molly's book? OK, so I am that difference, in terms of making it come alive. And that's a really balancing act. So, that's the challenge, huh?

Greg Archer: What are your thoughts on the writing itself and the writers, Margaret Engel and Allison Engel? Twins.

Kathleen Turner: Peggy and Allison are sisters. They said that the day Molly died, we have to write this. They sent me something between a treatment and a play. We worked on it. And also before we were putting the finishing touches on it, we brought in this great writer, Jeffrey Hatcher--he's just a totally professional, funny, good man. And he helped us with the final polish. It was a real creation.

Greg Archer: Must be a great feeling--that collaborative effort.

Kathleen Turner: Yes. Because I am a lousy writer. I can't write to save my life. But I am a very good editor--ha ha.

Greg Archer: What do you love most about acting?

Kathleen Turner: Obviously, as the years go on, you really have to think about this, you know? You question it over and over. I do. One of the reasons I love stage so much--film is satisfying and you can do so many amazing things on camera--but stage... I was trying to explain it to somebody. There are some nights when I feel like my arms can snake all the way down the walls of the theater and hug everybody in it. Can you imagine me with 300-foot arms? But that's how it feels--that I am holding everyone in a hug. And it's just exciting. This is a great, great feeling.

Greg Archer: I'm curious about who some of your inspirations--in the past, or now?

Kathleen Turner: My mind goes right away to Maggie Smith, who I love and adore. We're good friends. She kind of adopted me in the first season of the West End, and she's... Well, we're similar. This [acting] is my job; and we do it. It's not about suffering. It's not about losing yourself. It's just...this is my job. This is what I do well. Now I am on stage, now look--I'm off. I like that. This is not my entire life. This is a part of my life that I love doing.

Kathleen Turner: I think I am.

Greg Archer: I did appreciate what you said about Hollywood and the film industry when you appeared this fall at the Chicago Film Festival. What do you think the industry could use more of?

Kathleen Turner: I guess "Hollywood," to me, means the studio system. I think it is so money-oriented that it is a business...to the extent that they will create a property or a project looking at what might be in the return. And not looking at what's in the project or what it is about, necessarily, but what are the odds for making a great return. This does no make for great creativity. This I will stand by.

Greg Archer: One last thing: What's some of the best advice you've been given about life?

Kathleen Turner: Wow, well--not to take it too seriously. You know, things pass. What's a disaster today, is not going to be there in a month--hopefully. It's an ongoing process. I gave myself a present this summer for my 60th birthday. I bought this ring that I wear on my first finger always, and the inscription says: la vida un duno. Life is a Gift. So I wear that everyday.