On stage, Kathryn Morgan is known for her "particularly stunning" jeté and "unerring musicality." But after spending the last couple of years off stage recovering from an illness, the dancer proved that she can apply that same level of graceful precision to dolling out the kind of real talk we don't usually hear from ballerinas.

"If you're more concerned with having friends, this may not be the career for you," Morgan says, looking straight into the camera, in one of her recent "Conversations With Katie" videos on her YouTube channel for aspiring dancers.

A former soloist for the New York City Ballet, 25-year-old Morgan has been dancing since she was 3 years old, joining the NYCB when she was just 17. She was diagnosed with an under-functioning thyroid in 2010, four years later. The resulting exhaustion, severe migraines and weight gain led her to leave the professional ballet world two years later so that she could beat the illness without the pressure of keeping up with rehearsals and maintaining a "ballet body."

After decamping to her hometown of Mobile, Ala., to recover, Morgan set up her blog If The Pointe Shoe Fits and her aforementioned YouTube channel, where she fields questions about everything from company auditions to ideal "turnouts." She also provides makeup and barre exercise tutorials to help aspiring dancers get an extra edge if they don't have a mentor to help them face-to-face.

Now that she has a "clean bill of health," Morgan is back in New York and looking to pick up her ballet career where it left off in 2012. She spoke with HuffPost Women recently about what it was like to take a step back from her career to battle thyroid illness, how she manages to juggle body image issues in the professional dance world and what she plans on doing now that the NYCB is no longer an option.

At what point in your dancing career did you feel like you'd "made it"?
I would probably say when I danced the lead role of Juliet in "Romeo and Juliet" as well as Aurora in "Sleeping Beauty." I danced my first Juliet at 17 and then my first Aurora at 21. Those were definitely highlights of my career.

When did you start to feel ill?
It was right about that time that I was in Vogue. I remember rehearsing eight hours a day, but I started putting on weight, my hair started falling out and I just felt exceedingly exhausted. It just didn't make any sense -- gaining weight when you're exercising eight hours a day. I remember having several months of debilitating migraines and just being completely exhausted. Then I finally went to the doctor to get tested for mono, and that's when they found out that it was my thyroid.

Were the ballet masters concerned about your health or your appearance when they'd approach you about your weight gain?
To be honest, it was just a concern for my appearance. Ballet is an aesthetic art and you have to look a certain way. If you don't meet the standards, they can't put you out on the stage. The audience is paying to see a certain standard.

When did you decide to leave NYCB?
It was about two years after the diagnosis. I kept trying to fight it and to get back on the stage and get well all at the same time. Finally, I was supposed to dance one of the lead roles in "A Midsummer Night's Dream," and I broke down because I just couldn't do it anymore. I was not getting better -- it was getting worse with all of the pressure they were placing on me and the pressure I was placing on myself.

So I asked if I could leave the company, break my contract and go home and get well. The only way I could get better was to leave. At that point, I had gained 25 pounds, and then I put on 15 more once I left. It was just horrible.

What did you do when you left New York to recover in Alabama?
Once ballet was taken away from me, I didn't know how to react. I kind of just sat there feeling like a failure and feeling like my livelihood had been taken away from me -- because it had. But eventually, once I started to get better, that encouraged me. I just tried not to identify as a dancer for a while.

Then I realized this past May, once I did get my clean bill of health, that I wasn’t tied to a company and I didn't have anyone to answer to. That’s when I started the YouTube channel for dancers. If I had been in a company and tried to start it, everybody would have had to approve it.

An episode of Morgan's "Conversations With Katie" from her YouTube channel

What's your goal with your YouTube channel?
It's sort of me catering to my 13-year-old self and what I would've wanted to know at that age. But also it was therapeutic for me, because I got to put some rumors to bed, like the ones about me being fired.

When followers ask you questions like “what is the ideal height for a dancer?” does that worry you about the pressure to conform to a ballet dancer standard of beauty?
I do want to send people a positive message, but I never want to lie to them. I'm not going to sit there and give them some fantasy of what's possible and what's not. The nice thing about the height question is that really there's no height limits for ballerinas. I've seen everybody from 5 feet tall to 5 foot 11 inches, so that one was easy. With the more difficult ones about weight, I try to keep it positive but keep it honest. It doesn't benefit them if I give them some unattainable fantasy.

Did you experience any direct pressure to be thin during your time as a professional dancer?
I think every dancer does -- you're looking at yourself in the mirror every single day in a leotard. I tell people who are not dancers that it's like being in a bathing suit all day long. So you definitely feel the pressure. Then there are some people who are very naturally thin, and the director sees them as the standard because they're rail thin and everybody else doesn't quite measure up. We're all trying to get roles and be cast in things. You're constantly trying to figure out where the directors' minds are and why someone got this role and why you didn't. It’s a constant mental game. 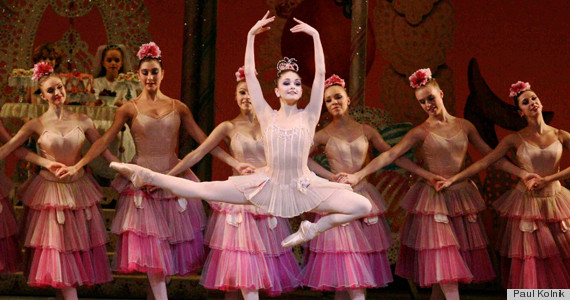 Morgan (center) dancing in "The Nutcracker" for NYCB in 2009

Did you see that pressure drive anyone to partake in any unhealthy behaviors to keep weight off?
I have no doubt that there were some people who did. People were probably very good at hiding it, so I never witnessed any huge problem. I witnessed it a lot more in ballet school, rather than in the company. With the company, you're dancing so much that you have to eat. You will not get through a day if you don't eat. Especially in New York City Ballet -- you dance 10 hours a day and you have to run 50 ballets a season. You have to eat something, otherwise you'll fall down dead. People realize early on that you can't not eat.

Is body image something that's discussed in the dance industry?
People kept quiet about it. It's not really talked about. You have to be thin, you have to look good, you have to fit in the costume, and that’s pretty much it. It's just part of the job. The dance world is moving away from the sickly, sickly anorexic look and accepting more body types, but you still are expected to look good at all times.

Do the physical demands of ballet make thin bodies a prerequisite?
I think so. People say we should have all kinds of body types, which is absolutely true. You do have to be relatively thin for not just aesthetic purposes but for logistics. When I was heavier, I found that things just hurt more. Pointe shoes hurt a lot more, and it was really hard to do some of the things that I did when I was thinner at a heavier weight.

I think we need to encourage healthy dancers and healthy bodies, not sickly. At the end of the day, though, it is an aesthetic art and the guys need to be able to lift you. You have to be able to get off the ground when you jump. I witnessed firsthand that it is a lot more difficult when you're heavier. It's a very, very tricky issue, and I don't quite know what to think about it at this point. 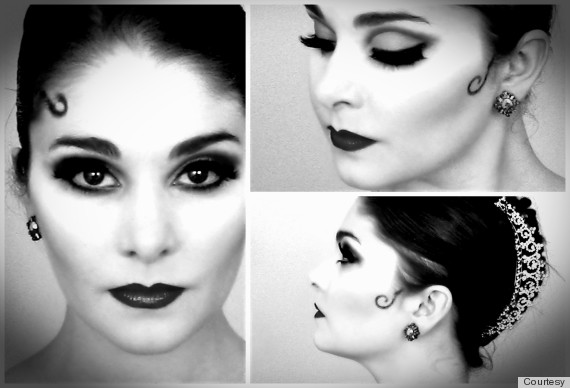 Stills from one of Morgan's makeup tutorials

What are your goals now that NYCB is no longer an option?
Obviously, the first step is to get in shape and then I'll figure out where I want to go. I do want to audition for other companies, perhaps in Europe. I'll have to shop around, but right now, it's about me getting in shape.

Any dancers, choreographers or ballet companies that you think are steering the body image conversation in a positive direction?
I know that Tamara Rojo, the director of the English National Ballet, has been very outspoken about that. She will not hire anyone underweight, which I think is wonderful. I think Peter Boal at the Pacific Northwest Ballet has set a very, very good standard. All of those dancers are healthy and fabulous. There are many companies that are moving away from unhealthy bodies. I think everybody is actually beginning to see that anorexic-thin dancers aren't the way to go.

Women Making It Work Working It

Kathryn Morgan, Former New York City Ballet Dancer, On What It's Like To Gain Weight In The Dance World
How Amazing Women Are "Making It Work"