The Oscar winner said "American Horror Story" has helped her find her way. Bates, who spent two seasons on "Harry's Law" before NBC unceremoniously dumped the legal drama, said she was shy about what the next step in her career was going to be, but had floated the idea about being on "American Horror Story" to her friend and series star Jessica Lange.

"Sometime after [speaking to Lange] I had a double mastectomy and so I was really still reeling and healing from that when I was having my meeting with Ryan. I wasn't really sure where to put my foot next in the business. I was so excited after that first meeting, I thought, 'There is life after all.' [Laughs.] I discovered that here in New Orleans," Bates told The Huffington Post in a phone interview. "I'm not only enjoying doing the show down here, but I found a wonderful place to go -- I need to have treatment on my arm because of lymphedema -- and there's a wonderful place here called the Center for Breast Reconstruction, which I've just discovered, and now I'm contemplating reconstruction for the first time since my surgery."

"I feel like I've just landed in clover, not only with the show, but for my own health. That's a great feeling. As my niece said: 'Lost in the right direction.'"

In "Coven," Bates plays Madame LaLaurie, a real-life 18th century figure who became infamous for torturing and killing her slaves. Viewers meet her character through flashbacks in the pilot, but the real action is still ahead in present day where LaLaurie will tangle with both Lange's supreme witch Fiona and Angela Bassett's voodoo priestess Marie Laveau.

Read on for more from Bates about working on the show -- she's been a "freak fan" since the beginning -- with the "fabulous" Jessica Lange and what she hopes will happen to her very evil character.

Ryan Murphy has said your character is so much more evil and scarier than your "Misery" character. He wasn't kidding.
No. [Laughs.] It's off the charts.

What was your reaction when you read the scripts?
Well, I read the first three scripts and I was just blown away by where he's taking the character. I really had to separate from the real woman -- who I did a lot of reading about and a lot of research about the time period in which she lived -- and then the character that I'm playing and where Ryan is going with it. That's what I think is really fascinating. People have debated [her] for years. People here [in New Orleans] say she was a terrible person and she really did all these things. Some people say her husband was involved and whatever, but what's most important is what Ryan's doing with the character in "American Horror Story." That's what fascinated me during the pitch is where he's going with it.

Is there any redemption for her or is she just flat out evil?
Well, I hope there's going to be some redemption for her. I don't know, it may be that her only redemption is to get what's coming to her. I don't know what's in Ryan's mind; I haven't asked him, I don't want to know. I just take delight in reading every new script that comes along -- and I really do. [Laughs.] You know, I can't always say that's been true about my experiences in television, but in this case I just love reading every new screenplay that comes along. The writers on this show are terrific ... 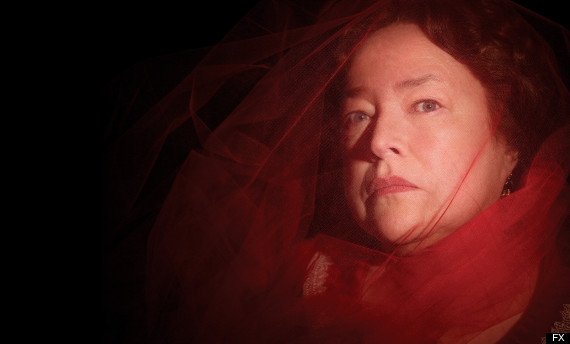 You're one of the few who has a giant costume to wear. There's a ring your character wears -- will we learn more about that?
I believe it's called a promise ring. The black ring she wears is not brought with her [to present day], so that's more of her party wear, but her promise ring makes it through with her. But so far the answer would be I don't know. [Laughs.] To be to continued ...

I kind of wish you guys premiered a little earlier so we would see more "American Horror Story" costumes this Halloween.
I know, wouldn't that be great?

Between your costumes and Jessica Lange's, it's awesome.
Oh my god, and isn't Jessica fabulous in this? Oh my god. She's completely done a whole other fabulous character for "American Horror Story" that's so different from her other characters. Ugh, love it. Love the high heel that comes out of the car -- what an opening! And in the rain with the umbrella -- just loved it!

I know you're friends with her. Does that chemistry translate on screen? Your characters are enemies.
Yeah, we've been in things with each other. We did a movie together -- I did a small part in a movie called "Men Don't Leave" she did back in the '80s and we did a movie that we shall not mention [laughs] not too long ago. I like her so much and we trust each other. I love working with her and I feel so ... I don't know, I feel really proud to be in her presence because of the filmography she has. I've been a fan of hers since "Frances." They don't make them like her anymore. She's one of the real glamorous movie stars of all time. I was there when she got the award at the New York Film Society and she shares that award with icons like Claudette Colbert. I mean, come on, she's amazing. 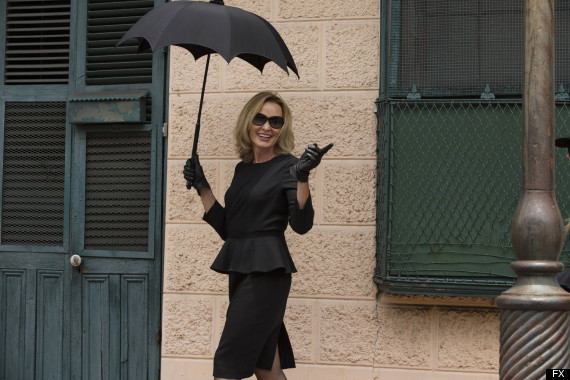 What can you preview about the dynamic between your character and Angela Bassett's?
Well, as you can imagine, we're off to a really ignited start. I think the battle lines have been drawn and you'll certainly see more in [Episode 2 and Episode 3]. Tim Minear had said in some press recently that the witches from Salem came down to the South and there's been an enmity between voodoo and witchcraft since then. It's important to note that I'm not a witch, so I don't know how I'm going to fold into all of this.

You mentioned that you watched "American Horror Story." Did you have any favorite characters from previous seasons?
I loved the woman who played Anne Frank [Franka Potente in "American Horror Story: Asylum"] ... and I loved watching Sarah Paulson last year. I loved Jessica's character from the first year, of course. I just thought that was absolutely outstanding work that she did. I loved seeing Lily [Rabe] in the premiere. I didn't realize she was playing Misty Day. I think that's such a wonderful character for her and I can't wait to see. I have a special spot in my heart for Franny [Conroy] because we worked together on "Six Feet Under." I loved her Moira, I loved her angel of death, I can't wait to see her Myrtle Snow. She's the bee's knees. Even when she played the tough-talking woman who comes in the laundry, I loved all of that. I've been a real freak fan of the show since the beginning.

Did anybody's performances surprise you this year?
I just saw the pilot along with everyone else on Saturday night. I haven't seen any of the other episodes, just the scenes that I'm in. Since it's such a huge ensemble, it's a very skewed look. I couldn't even begin to tell you. I just have one scene with Emma [Roberts] and Jamie [Brewer] and Gabourey [Sidibe] -- I didn't really know how fantastic they were. I thought especially Emma really shone in the premiere. Most of my scenes since then have been with Gaby, who I was really hoping I'd get a chance to work with. I love her work in this. We're really taking off. I just can't wait for people to see it.

Is there anything too heinous you won't do? After last year, Jessica said no more caning scenes.
Well, I've done some pretty heinous things so far. I guess I'd have to reserve judgment on that. I know there was one particular scene that I can't divulge that really made me weep. It was very upsetting. To think these kind of things actually went on, I mean people were tortured in those days. Horrible things were done, that's why they call it "American Horror Story." Part of the show is about race and I hope people don't feel it's trivialized because it was a heinous part of our culture and we're still fighting battles over race. It's a very serious and difficult subject to talk about and I hope that our show can do its own small part to foster conversation about race. It's entertainment, it's a fun show, it's a horror show, it's all those things, so I don't know if people will feel like it's not weighty enough to take on race. But I hope we can. I hope we can. Anyway, that's how I feel about it.

On a lighter note, if you had magic powers in real life what would you want to do?
It's something that I've often thought about. I'd like there to be the ability to tell ... maybe it would involve somebody's aura or some kind of light on top of their head to let you know if they were lying or not, if they were telling the truth. I wish I could have every magical power in the world. I wish I could speak every language, I would like to have an IQ of 300. What was that wonderful movie that Bradley Cooper did recently ["Limitless"] where he takes the pills and he could suddenly do all these different things and use his brain? I would love that. Imagination is just infinite. I would love to be able to do all the pedestrian things like be invisible, fly, go back in time, change into different animals and all that kind of stuff. And put spells on people, but not hurt people, but make them learn from their mistakes. [Laughs.]

Ryan often brings back actors. Would you do another season?
Oh, absolutely. I would love to be part of his company. I think it's doing exciting work. I love the people. You bet, I'd like to stay on the team.

Is there anything you want to add?
I would like to think someone could be redeemed ... I like the idea of redemption in a lifetime, that we could learn from our mistakes and change our behavior and change for the better. I like to think that that would be possible. If I could see that happen to my character over the duration of the series, that will be great, but you know, this is "American Horror Story." [Laughs.] I don't know, I'm not a betting man!